Discover the ways agriculture and food production are contributing to climate change and destroying the planet and what you can do about it.

Global warming is happening; no one can deny that. Year on year weather conditions are out of control, sea levels are rising and ice sheets are melting.

Food accounts for up to 35% of the world’s man-made emissions1. It’s one of the only things that as consumers, we have control over.

We can choose to eat less meat, to eat more sustainably sourced produce and support restaurants and corporations who are also reducing carbon emissions.

So how does food production and agriculture impact climate change and contribute to global warming?

The Greenhouse Gases and their impacts

Nothing is net zero, and even the most sustainable farms produce emissions. Here are the main greenhouse gases and their impacts2:

*Land Use Change is any way in which humans modify the natural landscape. Some of these changes are permanent destruction, such as the change of land from forest to cropland. Other changes, such as cropland abandonment and forest restoration, may attempt to repair previous damage.

Which foods emit the most emissions?

We have ranked3 these from the most emitting to the least. There’s no surprise that beef is top of the list.

Beef, lamb and goat: Usually the highest emissions among all food categories due to methane emissions (animal waste and cow belching/enteric fermentation) and indirect emissions from land use change (deforestation). Around 21-35 kg CO2e/kg of meat.

Chicken and pork: Usually the second highest after beef, lamb and goat but with a significant difference from red meat (3-6 kg CO2e/kg of meat).

Fish and seafood: The CO2e values vary a lot here. The usual suspects are feed production for farmed fish and fuel consumption for the fishing boat.

Fruits and vegetables: Usually very low CO2e, unless transported by plane. The majority of emissions comes from fertiliser application and transportation (0.05-1.3 kg CO2e)

Grains and pulses: Usually low CO2e with most emissions coming from fertilisers and fuel consumption for the threshing machine (0.3-0.9 kg CO2e) 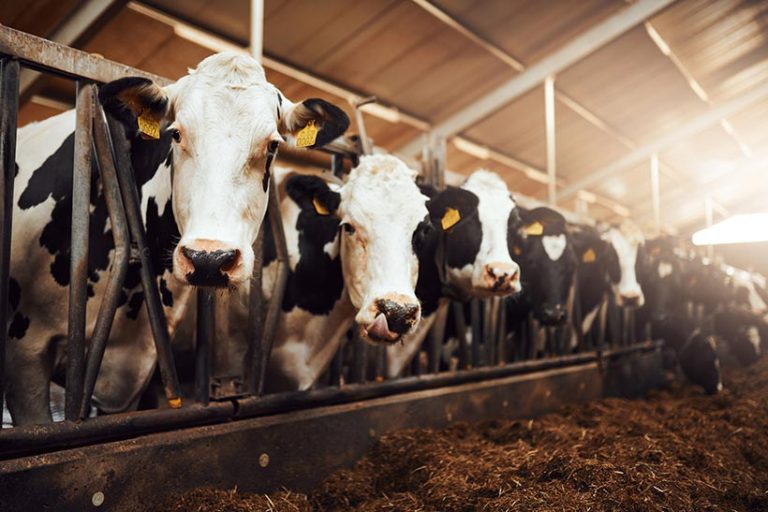 Animal agriculture is one of the largest contributors to climate change due to the high emissions it generates. Image credit: Jay Yuno via Getty Images.

When the weather conditions don’t allow produce to grow in an open field, glass heated greenhouses are used instead. They require lower inputs (less machinery, fuel and fertilisers) with respect to the open-field operations and the yield is usually higher.

However, they require the construction of glass greenhouses and they need energy in the form of heat and electricity for both construction and maintenance.

Electricity and heat generally cause an increase in greenhouse gas emissions.

Local food is not necessarily more environmentally friendly than imported, seasonality is! When a produce is in season, then it should be local!

This is why a tomato grown in season in Spain in an open field is more environmentally friendly than a tomato grown out of season in a greenhouse in the UK, despite the Spanish tomato having to travel to the UK. 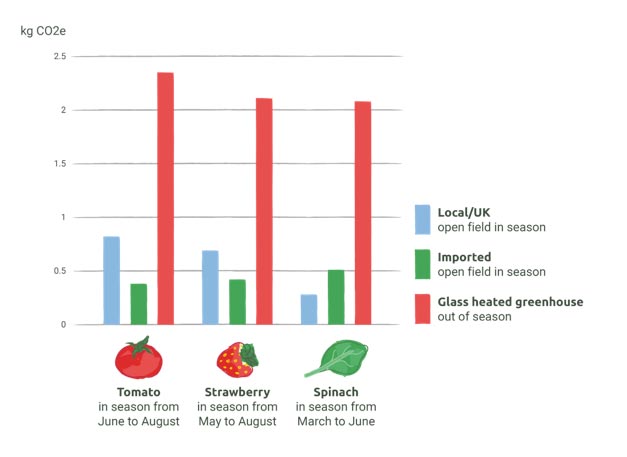 This is a very nuanced subject. In the case of animals, particularly poultry and pork, organic production performs worse on a climate level. There is more land occupation for the animals, the animals live longer, require more feed and thus produce more methane (one of the worst of the greenhouse gases).

Another drawback of organic farming is that it has a lower product yield with respect to conventional agriculture. According to some studies, yield averages are 8 to 25% lower5 in organic systems, and this lack of productivity can create more carbon emissions.

Lower yields are due to lower fertiliser input, the possibility for crops to be attacked by pests and the competition for nutrients with weeds and grass.

Fruit, vegetables and grains show a general trend for organic production to have a slightly lower climate impact (1-2%). This is mainly due to the lower energy required to produce synthetic fertilisers.

In terms of the environment, organic farming doesn’t use mineral fertilisers, synthetic pesticides, animal drugs, genetic engineering and food additives that may have adverse health effects. 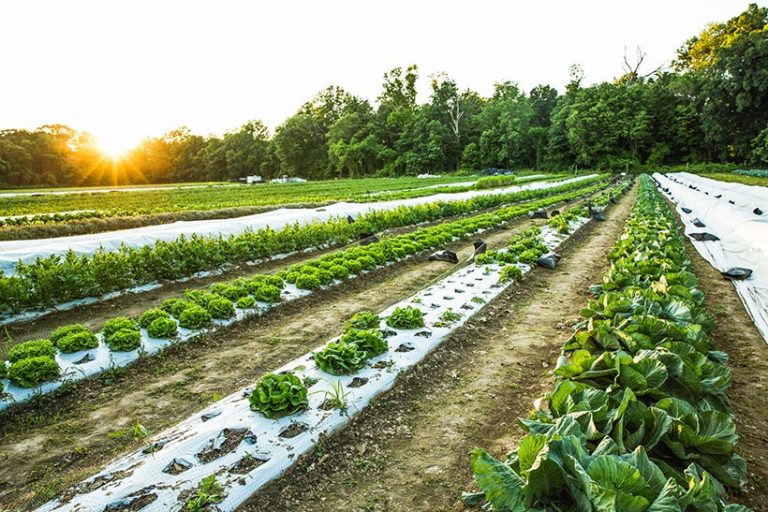 Pests are managed naturally, crops and livestock are diversified (i.e., crop rotation), and soil is improved with compost additions and animal and green manures.

Conventional farming is better from a climatic perspective because animals have shorter lives and are housed in partial to full confinement structures and so require less land and maintenance.

In the graph below, we see the breakdown of global land area today. Half of all habitable land is used for agriculture6. 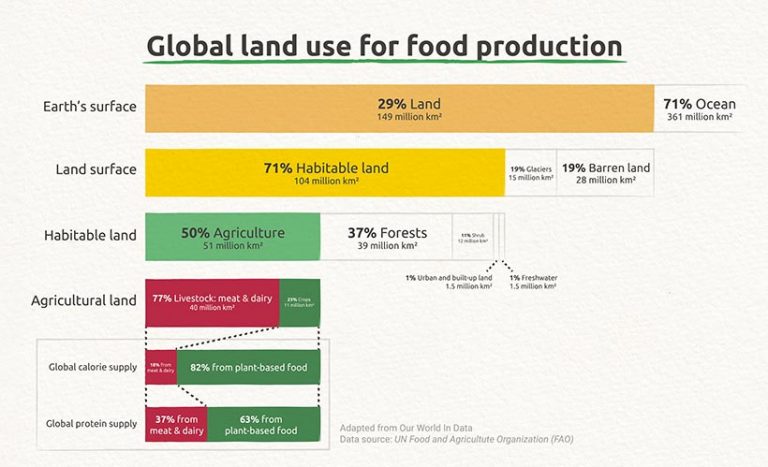 Half of all habitable land is currently used for agriculture. (Source: Our World In Data)

There is also a highly unequal distribution of land use between livestock and crops for human consumption. If we combine pastures used for grazing with land used to grow crops for animal feed, livestock accounts for 77% of global farming land.

While livestock takes up most of the world’s agricultural land it only produces 18% of the world’s calories and 37% of total protein7. Agricultural expansion results in the conversion of forests, grasslands and other carbon ‘sinks’ into cropland or pasture resulting in carbon dioxide emissions.

Who knew food was so complicated? There is hope however and action you can take:

What we really need is for agriculture to become more sustainable and to not deplete our resources.

Share this article with your friends and family and spread the word. The power is in the masses to make the government realise enough is enough.

It’s in so many foods it’s almost impossible to avoid completely, but is palm oil vegan?