The truth about the modern day chicken industry

Claire Palmer reveals what Viva!’s investigations have discovered about the chicken industry… 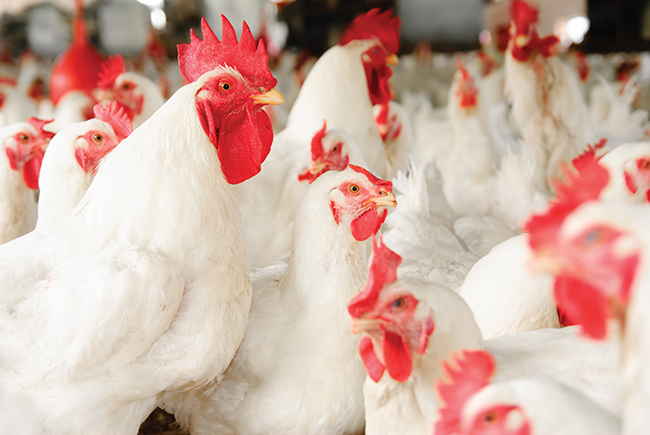 The chances are, you won’t have seen a field full of chickens recently. Perhaps you’ve never seen one. While more and more egg laying hens are ‘free-range’, you may still not have seen many pecking about as most never leave their sheds. You certainly won’t have seen any ‘broiler’ chickens – the regular ‘table chicken’ – as they are raised indoors in the most intensified and automated type livestock production possible and are the most widely farmed animals of all – with over 56 billion being killed worldwide every year.

Named after the part of a stove used for a cooking method called ‘broiling’, the fact that the modern-day chicken is even a bird is lost on some people. They are never seen as individuals but as a product of factory farming – sheds full of white chickens. Farmed with thousands crammed into a single shed, chickens live their short six-week lives on their own excrement. The only sunshine that they will ever feel is through the sides of a slaughterhouse truck.

The body of a broiler hen is pumped full of antibiotics and has been selectively-bred to produce more meat at a faster rate. The life of a meat chicken is nothing like that of its wild ancestor, the jungle fowl, which still lives wild in many parts of Asia. Sadly for the chicken, he or she still retains all the instincts and biological needs of a wild bird. Like many animals caught up in intensive and systematic exploitation, they are nearly all drawn from the same gene pool and essentially all look alike, with seemingly little variation between individuals, which seems to make it difficult for most people to empathise with them and view them as thinking, feeling beings with unique characters.

The best way to imagine life for factory farm animals is to put yourself in their place. Think about how it would feel to live your entire life in a windowless shed with tens of thousands of others, under artificial lighting. One of the side effects is a lack of sleep, which, as we all know, means a lowered ability to cope with stress. Everything is tightly controlled – humidity, antibiotic use, feed and water. 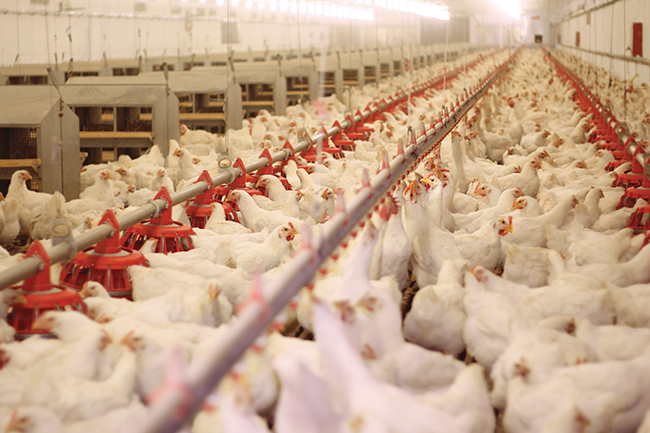 Imagine your body growing so fast that your legs cannot sustain its weight and buckle beneath you, dragging you along the urine-soaked bedding. You then have to live with the resulting red-raw ammonia burns, breast blisters, dermatitis, leg disorders and foot rot. Many of these crippled birds on poultry farms die from starvation and dehydration as they are unable to reach food and water points. Crammed tightly together with less space than an A4 piece of paper each, millions of chickens suffer from diseases such as respiratory complaints, infectious bronchitis and avian influenza, brought on by the squalid conditions inside the sheds. They are also subject to heat stress, which can be so severe that it results in suffering and death. The aim is to get as many birds as possible to slaughter at six weeks old and a drop out (death) rate is built into the sums.

Down on the factory farm

Viva!’s undercover investigations have frequently exposed bad practice on farms, such as sick animals left to suffer and die, but even routine practices are cruel and macabre. Feather pecking and cannibalism is common in broiler breeder flocks and so while, typically, female broiler breeders are not beak trimmed, males invariably are in an effort to prevent this. It is a mutilation that can lead to severe and lasting pain. 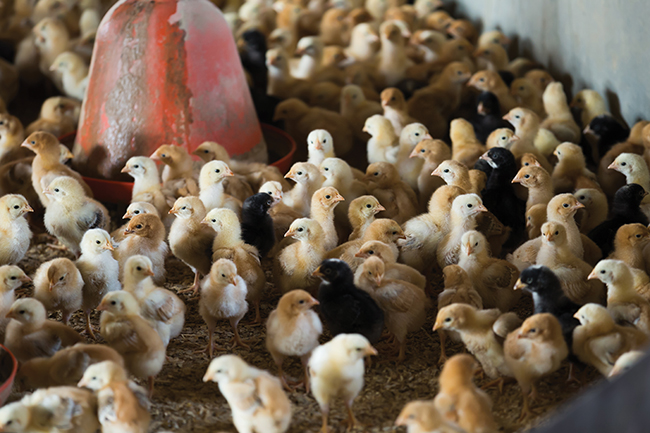 In 2016, over one billion chickens were slaughtered in the UK – around three million every day! This is mass murder on a staggering scale. It is even more disturbing to think that the birds going through this ordeal of confinement, transportation and slaughter are just six week old babies. In natural conditions they would still be sheltering under their mothers’ wings, but they will never have known any mothering, comfort, or compassion. Their eyes are still blue and they ‘cheep’ – chicks in an obese, adult body. At the slaughterhouse, a large percentage of chickens continue to be shackled upside down, by legs that may be ammonia burnt, weak or broken, so they suffer pain as well as being highly stressed.

An increasing number of birds are now gassed and show ‘aversion’, they struggle to breathe before dying. Death is not humane, but is invariably brutal and violent. There are around 278 slaughterhouses in this country, around 90 of which are for poultry and a high throughput abattoir can kill 9,000 birds an hour. Prior to transport and slaughter, broiler chickens have to be caught and crated, often in the middle of night. Teams of catchers are usually on piece rates and time is money. Undercover footage shows birds being grabbed and carried by catchers, several in each hand, before being flung into crates. Legs and wings often break or are dislocated. The crates are in fact drawers and contain up to 25 birds. One vehicle may carry up to 288 drawers, more than 7,000 birds in all.

Despite all the claims, chicken and other white meats are not good for you. Despite food poisoning scares about pesticides and chicken meat being pumped up with beef protein and water, white meat is still seen as healthy. This ‘low fat’ choice is a myth – one chicken now contains the equivalent of a pint of fat, the result of grossly unnatural rearing.

Claire Palmer is a campaigner for Viva! the charity working to promote veganism and to end animal suffering.