The Plight of Pigs

As Viva! launches its Face Off campaign, founder & director Juliet Gellatley reveals the inside story of  the British pig industry… 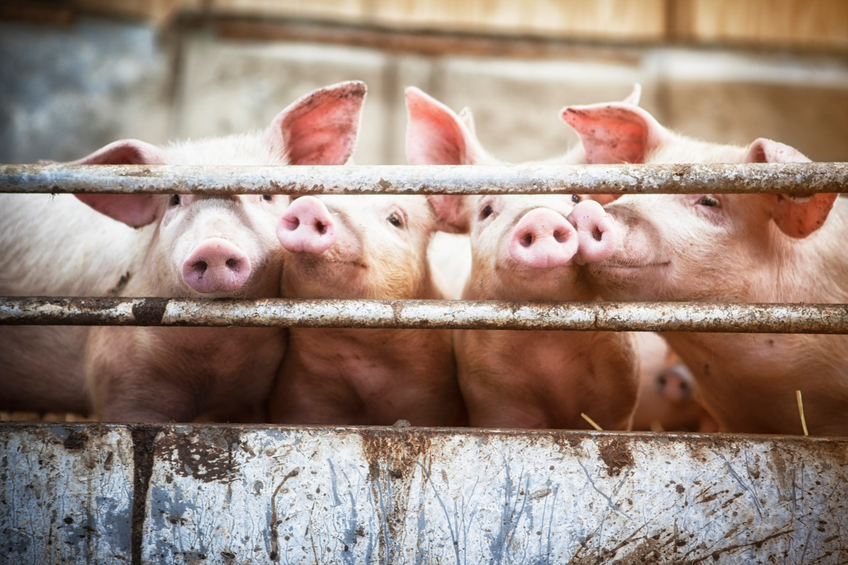 Pigs outsmart dogs. And a recent scientific review by Emory University, USA shows that they solve problems just as well as chimpanzees. My colleague’s pet pig, Babe, went to dog training classes and learned all the commands with ease – and much faster than her canine counterparts. She also latched on to the fact that the fridge contained delicious morsels and sneakily opened it when backs were turned!

Pigs once lived wild in most of Britain. Wild pigs live in small family groups and, as forest dwellers, spend much of their lives rooting in the soil, yet the vast majority of British pigs raised for meat are denied even that. Most sows are routinely caged to give birth and their offspring mutilated without anaesthetic and kept indoors on intensive units – from the ramshackle to the gigantic – where almost all of their natural instincts thwarted.

About 40 per cent of sows give birth outdoors, yet almost all of the piglets born outside will be reared intensively in industrial units. In fact, a staggering 99 per cent of British pigs reared for meat are kept indoors(2). Although some farms allow straw, most pigs are condemned to barren hovels with just footballs or chains hanging from the ceiling as a pitiful form of ‘environmental enrichment’. This causes extreme frustration and boredom for these bright animals.

Viva! has investigated about 60 pig farms over the years and recently I visited a typical farm in Norfolk during the black early hours of the morning. The doors of the first shed we came across were wide open and the lights had been left on. I walked inside, followed by a cameraman, filming the desperate life of pigs. It was one of the most difficult experiences of my life.

The shed was filthy and drab, festooned in cobwebs. A corridor ran through it, with mother pigs locked in crates on both sides. I stopped by one and looked at her abused body lying on a hard and unforgiving floor. ‘503’ was crudely painted on her back. She looked at me, then at her dead piglet, who she nuzzled through the metal bars that imprisoned her. In her eyes ran a story of emotional and physical pain – an animal completely neglected by society.

Birth is magical. But not when it takes place in a cage like this, just inches bigger than the mother’s body. What should be beautiful and rewarding becomes horribly obscene. And yet Britain still places over half of mother sows inside farrowing crates to give birth, where they can barely move for five weeks at a time.

Contrast this to the wild, where mother sows build nests from twigs and leaves, and can walk many kilometres to find a suitable site.

A sow will give birth to between eight and 16 piglets. The natural weaning age for pigs is 12-15 weeks, but on some British farms piglets are weaned artificially early at just 3-4 weeks. This is often more than piglets’ immature digestive systems can cope with and can lead to scours – severe diarrhoea – and a failure to thrive. As a result, piglets require medication and, in intensive conditions, end up on a daily regime of drugs, including antibiotics which has led to the development of ‘superbugs’. Almost one-fifth of piglets do not survive until weaning.(3) 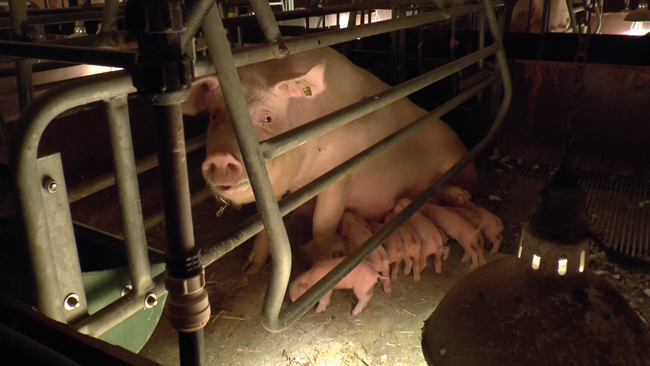 In the last shed at the Norfolk farm was another reminder of the horrors that the meat industry inflicts on defenceless young animals. On the floor lay the severed tails of piglets who had been mutilated by the farmer. Lying next to them were the discarded bodies of four piglets who didn’t even live long enough to leave the farrowing pens.

Paradoxically, as with most types of factory farming, mutilations are used to try and control abnormal behaviours directly caused by the intensive farming methods themselves. About 80 per cent of British piglets suffer two major types of mutilations: ‘teeth clipping’ and ‘tail docking’(4) – both without any anaesthetic and exposed by Viva! in the Daily Mail(5).

Teeth clipping is carried out to prevent damage to the teats of sows, who cannot avoid the attention of their piglets because they are incarcerated in farrowing crates. The mutilation can lead to teeth and gum damage, with chronic pain and risk of infection. Tail docking (cutting off part of the tail) is carried out to try and prevent pigs savaging each other, and it causes stress and intense transient or even long-lasting pain. This behaviour is directly caused by boredom, frustration and a lack of environmental enrichment.

In another shed, pig faeces littered the gangways that separated the pens of the older pigs that had been moved into groups after early weaning.

It seemed a sick joke that these beautiful animals were crammed into dirty, wooden-slatted pens, with no bedding and given absolutely nothing – except a ball. Pigs are meant to spend their days exploring their woodland homes, snuffling for food, playing with family. They roam 2-15km a night. They are fun loving and full of joie de vivre. In this place, the small piglets already had despair stamped in their expressions – here there was no play. 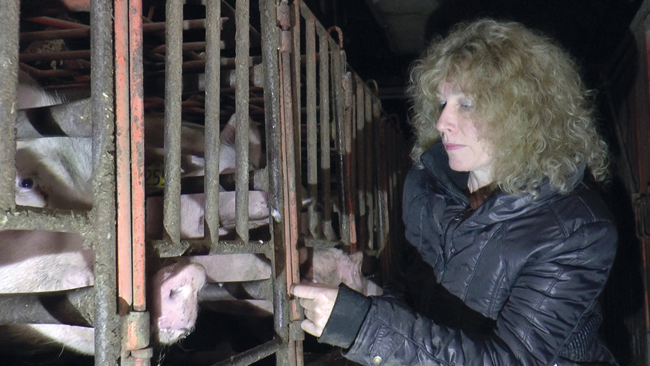 Mother pigs are killed at four years old for ‘low-grade’ meat. Their piglets’ lives are cut short at just 5-6 months old for pork, bacon, sausages and ham. Their natural lifespan is 12-15 years.

Although the pig industry changes little – people do. Almost all pigs are reared indoors for meat, but the British consumer is increasingly refusing to buy it. When I wrote a report on the industry in 2001, 16 million pigs were killed pa for meat in the UK; in 2014 it was 10 million. Still carnage, but the trend is firmly in the right direction.

Viva! has complained about many farms over the years to the government, but action has never been taken. We have to face up to the fact that Defra protects agribusiness, and it is up to us to take responsibility for the welfare of farmed animals. We can choose to use our colossal consumer power to be kind – and that means a vegan diet.