Overfishing: Why aquaculture isn’t the solution

With 90 per cent of the world’s wild ‘fish stocks’ fully-exploited due to overfishing, overexploited or depleted, aquaculture is on the rise – but don’t believe the pike, it’s all a load of pollocks.

Every year we kill in excess of two trillion wild fish globally, a number that is so hard to measure in singular terms that we refer to fish slaughter in weights – by the tonne, rather than the number of individuals.

For a variety of reasons – including increased consumer demand for seafood, the rapid development of industrialised fishing and widespread plastic pollution – we have lost more than 50 per cent of our marine life in the last 50 years.

Widely accepted as more of a problem in the North Atlantic than anywhere else in the world, ‘overfishing’ generally refers to when more fish are caught than can be replaced through natural reproduction.

While some regions have been more severely overfished than others, scientists warn that global fish ‘stocks’ could be gone by 2048 – based on the idea that if the catch of an individual species declines to less than 10 per cent of its previous maximum, the fishery has collapsed.

When overfished, populations of fish species are unable to cope with meeting increasing consumer demands for seafood and the fragile marine ecosystems, which our planet depends on, are disrupted.

As a result, seafood has become one of the most traded food commodities worldwide.

The notion that fisheries are exhaustible has been understood since 1900. Yet despite a few examples of depleted fish populations making a slight comeback (such as Newfoundland cod), there remains a lack of political will and, in some cases, economic power to successfully conserve and protect vulnerable species. 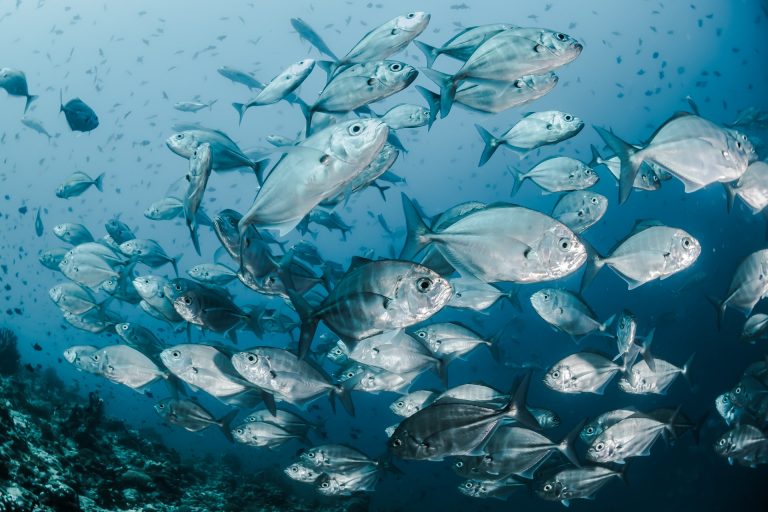 How does illegal (IUU) fishing impact the oceans?

Aside from the mismanagement of legal fisheries and the increase in pollution, our oceans are also under assault from illegal, unreported and unregulated fishing.

It’s modern day piracy and it’s highly profitable. It’s thought that today, one in three fish are caught illegally or through the exploitation of regulations.

Our oceans are vast and therefore the fishing industry is almost impossible to effectively regulate. The potential profits of pushing the boundaries are high and much of it is done out of sight; even with fisheries observers on board the vessels to supposedly ensure regulations are met.

The scale of destruction and the widespread suffering of marine wildlife is almost entirely hidden from view – even more so than that of the farmed animals we confine inside industrialised factory farms on land.

What about unwanted fish?

In 2016, total wild-caught fish production reached an all-time high of 171 million tonnes. Whether these fish were caught via trawl nets, long-lines, purse seines or gill nets, bycatch is inevitable.

Industrial fishing is indiscriminate. The wrong species, wrong sizes and even wrong sexes are incidentally caught in the process; meaning that wherever there is fishing, there is bycatch.

Around 300,000 small whales, dolphins and porpoise die from entanglement in nets throughout the globe every year, but due to under-reporting catch figures and the practice of ‘high-grading’ (when low-value fish are dumped at sea and replaced with higher-value fish), the number of deaths is likely to far exceed total fish production estimates.

Is aquaculture a solution to overfishing?

Aquaculture is the practice of farming fish under controlled conditions and includes both salt and freshwater species.

It’s the world’s fastest-growing food production sector, generating around 44 per cent of the fish we consume; and yet, in order to sustain its growth, it’s heavily reliant on the capture of wild-caught fish. #

In the UK, we slaughter about 115 million farmed fish, making fish the second-largest farmed animal slaughtered for food, after chickens.

The most commonly farmed species is the Atlantic salmon, with around one million salmon meals eaten every day in Britain. But as every pound of farmed salmon consumes around three pounds of wild-caught fish, there are far more lives lost.

Scotland is the largest producer of Atlantic salmon in the EU and the third largest global producer, worth over two billion pounds (GBP).

Of the 250 Scottish farms, around 70 per cent are certified by the RSPCA Assured scheme, which would suggest that high welfare standards are implemented and monitored. However, that may not be so.

What are the welfare issues on fish farms?

As with land-based factory farms, conditions on fish farms cannot replicate the complexities of an animal’s natural environment and, as a result, fish suffer from a range of serious welfare issues.

Stocking densities are the biggest problem fish farms face, as they either pack too many or too few individuals into dirty pond systems or sea cages.

Due to their lateral lines – a system of sense organs located in their heads and along both sides of their bodies, used to detect movement and vibration in the surrounding water – fish rarely like touching each other.

The fact that fish feel pain has been scientifically proven time and time again, but with every new report published it’s made out to be a shock discovery. What this appears to come down to is the idea that humans just don’t relate as well to fish as they do to other animals.

This could be due to a lack of facial expressions or other more familiar and recognisable forms of communication (such as body language). However, fish are more like us than you might think.

Leaving animal experimentation ethics for another time, extensive trials carried out on zebrafish to investigate their complex nervous systems showed that their pain receptors responded to stimuli in just the same way as those in other animals when activated, which is hardly surprising.

More studies revealed fish have the ability to develop cooperative behaviours and self-governing social structures in which chasing, nipping and lunging were observed; indicating dominance of one fish over another.

Fish are key to the survival of our planet as they play an important role in the nutrient cycles of marine ecosystems and, although a fascinating species, they are frequently overlooked when discussing the issues of animal welfare and rights.

While fish-farming is presented as a solution to drive down overfishing, the reality is that it exacerbates the problem by its reliance on wild-caught fish and is therefore incapable of meeting current and projected demands for seafood.

Choosing farmed fish over wild fish doesn’t alleviate the problem of overfishing and the likelihood is that if we don’t stop eating them today, they’ll be cod tomorrow.

Viva! is positively vegan and since 1994 has been campaigning to end the suffering of farmed animals. Viva! helps people reduce their meat, fish, dairy and egg intake and move towards a compassionate diet. It believes that every step towards being vegan is a positive one. www.viva.org.uk