Factory farming: The unknown suffering behind the UK’s cow farms

While most people think beef comes from happy cows in green pastures, the reality is very different, with many cattle experiencing hardship on Britain's cow farms.

Beef is one of the most popular meats in the UK. Millions of people enjoy tucking into a roast, BBQ, or steak, and see it as a treat.

But what they don’t see is the often miserable journey the cow made from birth to plate. Many of the animals spend at least part of their lives within intensive factory farming facilities.

The exact number of cow farms in the UK is difficult to collate.

According to a 2018 investigation by the Bureau of Investigative Journalism (TBIJ), “in contrast to large intensive pig and poultry farms, industrial-scale beef units do not require a government permit in order to operate. There are no official records on how many are in operation.”

But it added that its investigation identified “nearly a dozen industrial-scale beef facilities operating across England, including at sites in Kent, Northamptonshire, Suffolk, Norfolk, Lincolnshire, Nottinghamshire and Derbyshire.” The largest farms fatten up to 6,000 cattle a year.’

Just under two million ‘prime cattle’ (cattle raised solely for beef production) were slaughtered in the UK during 2018.

That’s a typical yearly total with approximately four million beef cattle in the nation at any given time.

And while many may think these cattle live happy lives, Hellwig says this is not the case. 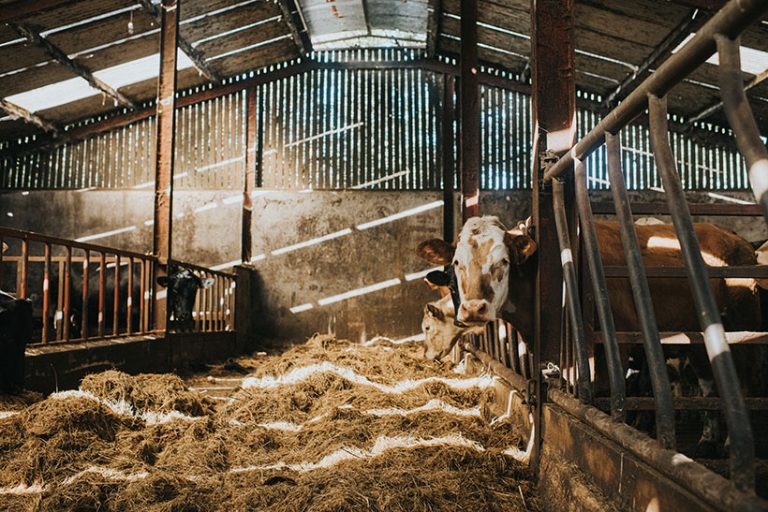 “While it’s common to think of beef coming from happy cows in green pastures, the reality is very different with cattle experiencing acute suffering,” she said.

“Even in the best systems, calves suffer routine mutilations, separation from their mothers and the terrifying journey to the slaughterhouse,” Hellwig added.

She cited zero-grazing and forceful weaning as some of the problematic issues within the industry.

“All beef cattle [who have a natural lifespan of around 20] have their lives cut very short. They’re killed at just one to two years old, the equivalent of a human life ending at four to eight years old.”

She told VF&L: “Many cows killed for their flesh spend much of their lives indoors on filthy factory farms, where they often develop respiratory problems because of the choking chemicals that fill the air as a result of the piles of manure around them.”

British beef comes from calves and cows born in both dairy and beef herds. These are also known sometimes as ‘suckler’ herds.

The animals commonly move through three phases. Firstly, they are reared as calves before they are returned to the herd to grow.

After that, they are then sent to another facility for fattening before they are slaughtered.

According to Hellwig: “In suckler herds, it is routine to wean calves at two to three months of age, even though this makes the calves more vulnerable to disease for the rest of their lives.

“Forceful weaning by a human causes nutritional, social, physical and psychological stress on the calf. Male calves would naturally suckle for nine to 12 months, and female calves would stay with their mothers for life without human interference.”

Hellwig added that farmers wean their calves in a variety of ways. Disturbingly, some go for “separating the calf from the mother with fences, so that they can see each other but the calf can’t suckle.”

Others, she said, put “nose flaps on the calves which hang over their mouth and prevent them from suckling.”

Some farmers will remove the calf from the mother into a different site entirely, where they can’t even see each other.

After the calf is weaned, and on a completely solid diet, he or she will be returned to the herd.

Most cattle live out on grass for one or two summers, then many are ‘finished’ in intensive pens, where they are fattened up for slaughter.

They spend up to a quarter of their lives in these facilities (up to six months) before they are killed. Often this is around the age of one to two-years-old. 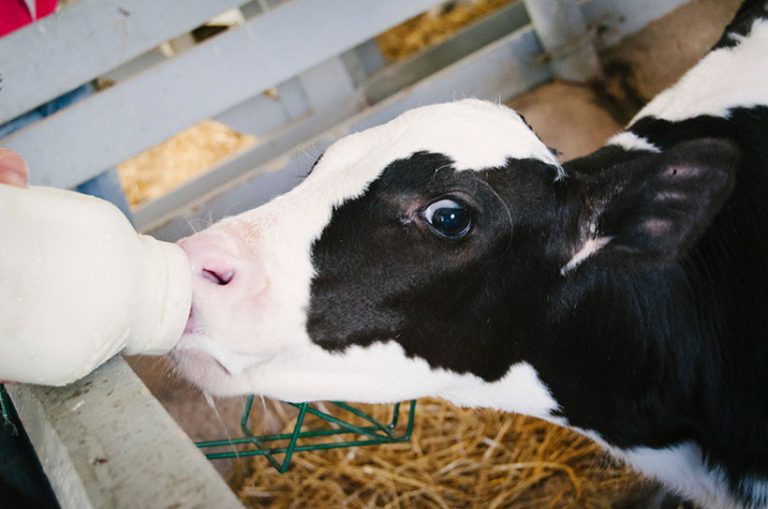 Forceful weaning by a human causes nutritional, social, physical and psychological stress on the calf.

The shocking suffering of veal calves

However, many veal calves, who are generally killed at six to eight months old – according to the RSPCA – spend their entire lives inside according to Hellwig.

She said: “Intensive calf-rearing systems mean that calves from the dairy industry – used for rosé veal – are reared in confinement from birth to slaughter. They don’t live out on the grass at all.”

The aim is to produce veal as cheaply as possible. This means their lives “are as bad as it can get, with high stocking densities and an inability to express much of their natural behaviour.”

Those who consume dairy, but not meat, may be surprised to learn just how many dairy cows end up on the dining table.

According to Hellwig: “Almost half of all beef comes from the dairy industry.”

Approximately 500,000 calves born into the dairy industry each year are seen as ‘low value’ because they are male and therefore cannot produce milk.

While some are slaughtered for meat, almost 100,000 are shot in the head shortly after birth. Several thousand endure gruelling, stressful journeys to the continent where they are killed.

When it comes to adult dairy cows, Hellwig said that because of the ‘exhausting cycle of lactation and pregnancy’ dairy cows go through, their ‘flesh is often low-quality once they’re slaughtered’. So it is often used in cheap, processed products like burgers.

Elisa Allen added: “[This is] the final insult to a cow who has endured years of exploitation and abuse that once she is completely spent – lame, old, worn out, or unable to produce milk – she is sent to slaughter and her body is cut up and served on a plate.” 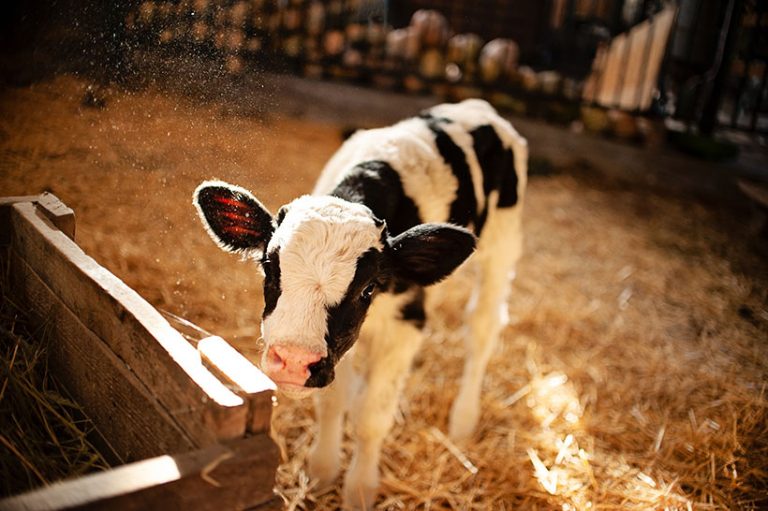 Almost100,000 dairy calves are shot in the head shortly after birth

Go vegan: an easy way to help end the suffering in cow farms

Viva!’s Laura Lisa Hellwig has one, easy piece of advice for people who want to help factory-farmed cows: and that is to ‘go vegan’.

PETA’s Elisa Allen agrees, saying: “It’s simple: go vegan! Today, millions of people in the UK have made the choice to eat only plant-based foods. Each person who does so saves the lives of nearly 200 animals per year.”

She added: “Regardless of whether it’s labelled ‘free-range’, ‘grass-fed’, or ‘high-welfare’, when it comes to meat of any kind, there’s only one guarantee. Animals were slaughtered at a young age so that their bodies could be dismembered, packaged, and sold.

“No animal goes willingly to his or her death.”

Despite all this, Allen believes there may be positive news on the horizon, saying: “It’s predicted that there’s going to be a fall in the production of beef in 2021, which is hardly surprising given the rise of healthy, humane, and environmentally-friendly vegan food options.”

Has learning about the reality of life on cow farms persuaded you to ditch dairy once and for all?

Here are our top 10 tips for quitting dairy.