Don’t be wooly about animal suffering

Will Sorflaten from Viva! investigates the reality of what happens to sheep to produce wool for clothing

When we think about veganism, the focus is usually on what we eat. It’s how most “oh, so you’re a vegan?” conversations start, often because people notice what we’re eating.

Understandably, most people see veganism through the lens of meat, dairy or eggs. Products like wool are often forgotten about.

That said, wool is an industry full of abuse, suffering and death, like any other animal industry, and does deserve more scrutiny. It seems to have escaped criticism, excused by its alleged environmental benefits and camouflaged with pleasant rural stereotypes.

The fact remains that it is cruel. I have friends who are vegan in every way except wool, under the impression that it’s the most sustainable clothing option, and I’m probably not the only one. So here’s what’s wrong with wool, why vegans should avoid using it, and what the alternatives are.

Two to six million lambs die every year in the UK as a result of disease, exposure to bitter environments, or starvation. That’s a staggering mortality rate of between 10 and 25 per cent, partly because sheep have been manipulated by humans to give birth to two or even three lambs rather than the one they would naturally have.

As sheep have only two teats for lambs to suckle on, the third and weakest lamb often dies from starvation, unable to compete for mum’s milk. The situation is made worse by many sheep having been manipulated to give birth in winter so that farmers can cash in on the spring market. It might be more profitable, but it causes more suffering and increases the mortality rate.

The lambs who survive have their tails cut off with a knife, hot iron or a tight rubber ring, and males are castrated. All these procedures are regularly done without painkillers and cause intense suffering to new-born lambs.

Shearers are paid by the weight of the wool they cut, not by the hour. Consequently, they often rush the process, inadvertently cutting into the sheep’s flesh and causing distress through mishandling.

Sheep are increasingly being sheared in winter as well as summer to maximise profits. Sheep need wool to keep warm and dry; if it’s removed in winter the result can only be suffering, illness and death.

Over 14 million sheep are killed every year in the UK, the vast majority are stunned, then have their throats slit. Farmers make out that stunning is painless, but it’s estimated that at least four million sheep regain consciousness and suffer intense pain as they bleed to death.

Either way, it’s the taking of animals’ lives who don’t want to die.

Sheep and lambs are frequently transported long distances without food, water or rest, for up to 14 hours at a time. Legally, sheep can be crammed into transporters with as little as 0.20m² per sheep when being sent to slaughter. 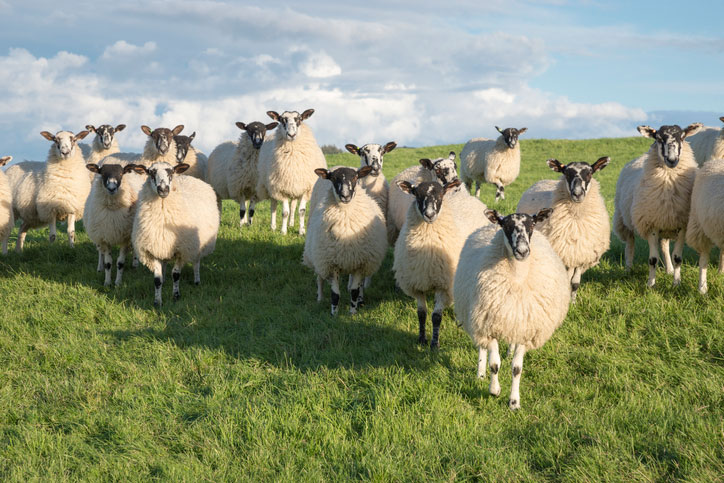 Do sheep need to be shorn?

It’s a common claim that sheep need to be sheared because they’ve been artificially selected to produce so much wool that it needs to be removed. That is approaching the subject from the wrong direction.

It’s our manipulation of sheep that has created these anomalies of nature and the only way to end it is to stop breeding animals who are essentially born to suffer.

The same syndrome is seen in the dairy industry where cows produce more milk than any calf can possibly drink. The answer is not to keep milking them, but to stop breeding these poor, manipulated animals into existence for human consumption.

The 14 or so million sheep we rear and kill every year suffer from birth to death through climate, mutilations and handling by farmers, during transport and at the slaughterhouse.

Increasing numbers of people are becoming vegan primarily because of the environmental impact of livestock farming rather than for ethical reasons. On the face of it, wool can seem like a good choice over petroleum-based products such as acrylic or polyester, which can pollute waterways with microplastics.

However eagerly the livestock industry presents the choice as being between ‘natural’ wool and some damaging petroleum-based product, it’s simply not the case. Bamboo has been shown to be a brilliant alternative as a soft, comfortable and highly sustainable material, and more and more products are made from recycled plastics (and yet still surprisingly soft!) and even recycled cotton.

Buying second-hand clothing whenever possible is another brilliant way of minimising our impact on the environment, now that fast fashion has been exposed as a highly damaging industry. Far from ‘natural wool’ or ‘terrible microplastics’, there are many alternatives that are better for sheep and the planet.

Environmental issues extend beyond the end product. Farmers ignore the methane and nitrous oxide emissions from sheep farming – critical in our climate emergency.

A multitude of reports on animal agriculture, including the largest study ever conducted by the University of Oxford in 2018 and the 2019 UN IPCC report, repeatedly show animal products (sheep included) are major contributors to the climate emergency and nearly every environmental catastrophe threatening the planet.

In terms of helping as many animals as possible, it’s still best to focus on the meat, dairy and eggs that most people eat. That’s where the biggest impact can be made, because those are the biggest markets. But to really end animal suffering, then wool, leather, silk and the other stuff we grab from animals has to go.

With plenty of alternatives, there are no excuses. For information on vegan clothing places (vegan restaurants too), check out myvegantown.org.uk, and see viva.org.uk.

Viva! is positively vegan and since 1994 has been campaigning to end the suffering of farmed animals. Viva! helps people reduce their meat, fish, dairy and egg intake and move towards a compassionate diet. It believes that every step towards being vegan is a positive one. www.viva.org.uk