Born to be wild: The origins behind how wild boar became factory-farmed pigs 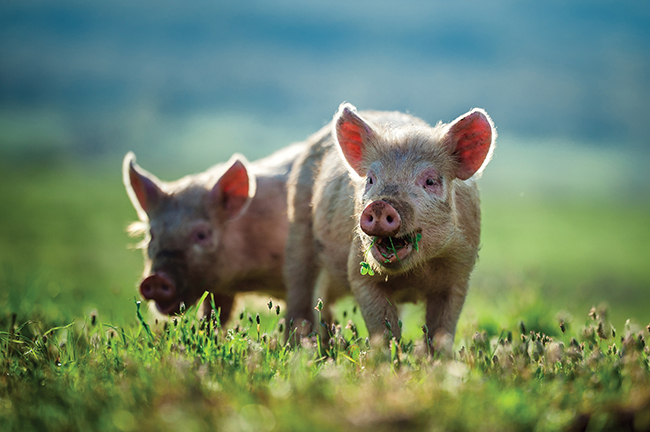 Moritz shakes his head while holding a jigsaw piece in his mouth. He then plonks it into position and is rewarded with popcorn. He has the mental age of a five-year-old child. But Moritz is a pig.

Anyone who has contact with pigs knows how wonderfully bright and emotional these fascinating animals are. The trouble is, most people never do meet pigs, except as slabs of dead flesh. It is an immense tragedy that they are eaten at all, let alone that half of the 1.3 billion pigs killed annually worldwide are intensively reared. The toll in the UK is 10 million and almost all are factory farmed.

Here are some telling facts from my report, Pig Farming: The Inside Story:

What an indictment of our species! To dismiss animals as stupid or dirty is a way of devaluing them, and pigs are neither. The more we discover about them, the more we realise how little we know about their complexities. 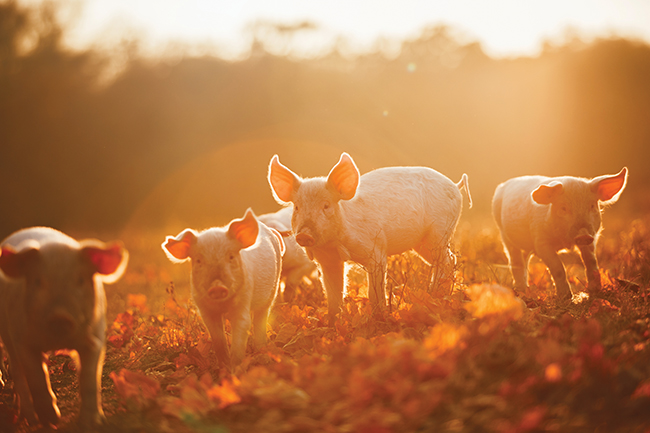 Pigs are fun loving, sociable animals full of joie de vivre. They belong to the non-ruminant section of the artiodactyls (even-toed ungulates) along with about 200 other species, including hippopotamuses. They are called suids (swine).

There are up to 16 living species and the domestic pig (sus scrofa domesticus) is a sub-species of the wild boar (sus scrofa). They originally occurred in Europe, Asia and North Africa and a number of islands, including Japan, Sri Lanka and the woodlands of Britain. Hunted to extinction in the seventeenth century, small populations have re-established themselves against all the odds.

Domestication began in the Near East about 9,000 years ago and they have been selectively bred ever since for growth and reproduction, but retaining their natural instincts, so they still think similarly to wild boar.

Wild pigs are nature’s explorers, most active at dawn and dusk and travelling up to eight hours a day as they forage. They like to hang out together when eating and radio telemetry has revealed that family groups can, over a six month period, cover 10,000 hectares!

David Wood-Gush and Alex Stolba, scientists at the University of Edinburgh, observed domestic pigs in a semi-natural enclosure over several years and concluded: “They used their rooting pads to flatten and push items; the snout for grubbing out thick roots. Morsels on the bark and wood were licked while old tussocks of grass were overturned so that their roots could be eaten. Young grass, on the other hand, was carefully grazed. In boggy areas they dug more deeply to get at the roots of sedge grasses and these, together with the roots of the trees, appeared to be prized”. 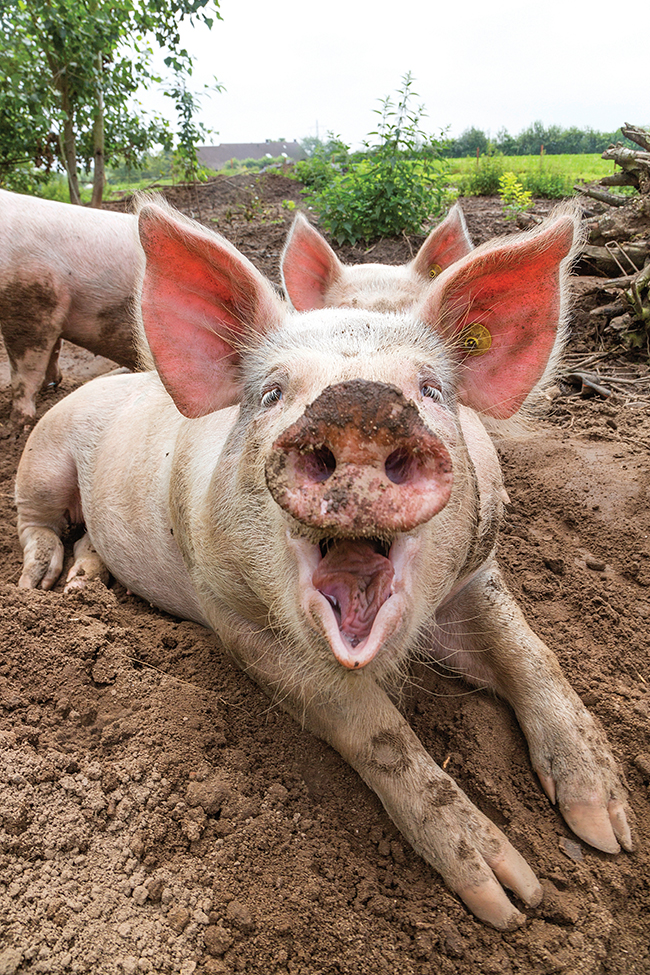 The adult pigs in the study were kept in factory farms and yet they adapted to being semi-wild quickly. Captive pigs have longer bodies, shorter legs and floppier ears than wild boar, but given half a chance, they will live just like them. The eyes of a pig are the gateway to their soul. I looked into the eyes of a mother pig just weeks ago, incarcerated in a metal crate, a piglet lying dead beside her. No need for words. Here was an animal in pain, both mental and physical.

Wild pigs are gregarious, forming herds or ‘sounders’ of 6-20 individuals, made up of one or more females and their last litters, led by an old matriarch. Male boars leave at the age of 8-15 months. Females remain with their mums or stay nearby. In the wild, teenage males live in loose groups, but may mix with young females and form friendships. Adult males are mostly solitary outside the breeding season.

Farrowing is often synchronized amongst females in the same social groups, so they feel sexy at the same time and give birth together. Before mating, males develop their subcutaneous armour in preparation for confronting rivals while their testicles double in size. They travel long distances in search of a sounder of sows, driving off any young animals while persistently showing off. They fiercely fight any potential rivals and will mate with up to 10 sows.

As anyone who has rescued sows will know, females who are feeling sexy will scream (and yes, I mean scream!) for hours for a mate. They respond to a boar’s advances by urinating to release pheromones but if they don’t, he may give up after several minutes. Males do not partake in parenting.

Sows about to give birth isolate themselves from the main group and build a nest from twigs, grasses and leaves, being extraordinarily active. Imagine the frustration of farmed sows being crated on concrete. In the spring of 2017, Viva! and Dean Farm Sanctuary rescued a pregnant sow, Dotty. Although she had never known anything but a concrete floor to give birth on, she (and touchingly her best friend, Winnie) collected sticks and straw to nest build. Wild sows have between four to seven piglets, while for farmed sows it is double that, one-fifth dying before they’re weaned. 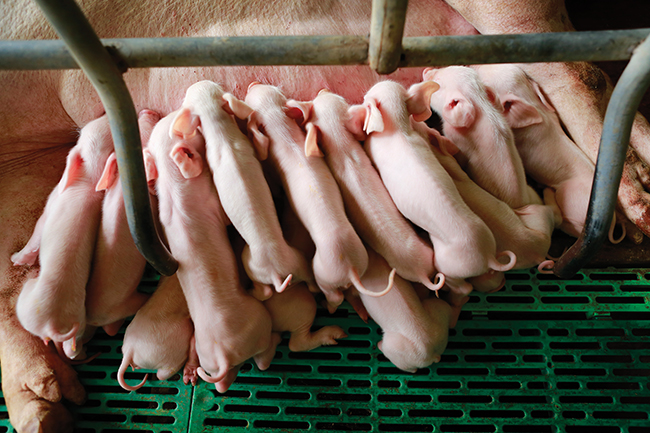 Wild mothers work collectively to protect offspring within the group and if a mother dies her piglets are adopted by other sows in the sounder. They may live from 8-25 years, while captive boars live 20-27 years. Farmed pigs are killed at six months old for meat.

When Hope and her six piglets were rescued by Viva! and Dean Farm Sanctuary last year, what struck me was the sophistication of the communication between them. For example, after her baby boys were taken to be castrated, Hope called just her boys back to her when people she didn’t know came near.

Pigs have poor eyesight, but acute senses of touch, taste and smell. They hear in the ultrasound range and can smell a human up to a quarter of a mile away! A pig’s snout is also highly sensitive – developed for smelling, carrying, pushing, rooting and social interactions – and can smell underground roots and tubers, a skill exploited since the ancient Babylonians to find truffles.

The desire to root is so strong that farmed pigs persist in nosing concrete floors. Because of concentrated feed, they spend little time eating and the frustration leads to chronic boredom. Imagine the assault on a pig’s senses of the filthy, stinking factory farm where Viva! has repeatedly filmed.

Having no thick hair cover, pigs are extremely sensitive to climatic extremes and rely on fat for insulation. When it’s cold, they huddle together like elephants and have no sweat glands, except on the tip of their snouts, so roll in mud to keep cool. It also stops sunburn and protects from flies and parasites. Contrary to the myth, pigs do not like to roll in dung – something they can’t avoid in factory farms. 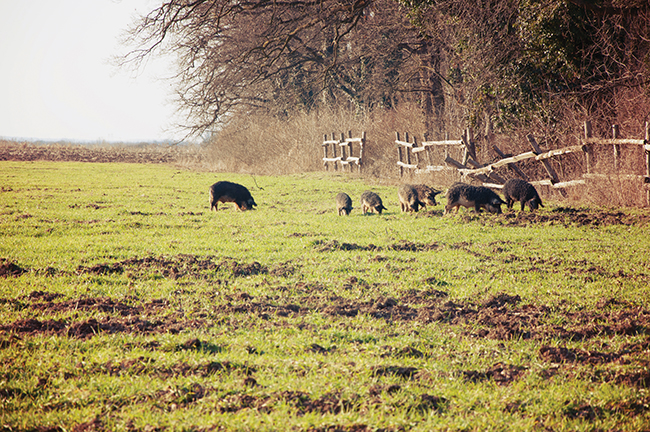 Pigs are extremely sensitive, emotional and bright animals, with long memories, which makes their routine abuse in factory farms even worse. Highly co-operative in social groups, they show affection by grooming each other and research has shown they can be trained to carry out more tasks than dogs. They can sit, pirouette, shake hands, complete obstacle courses, play bugle horns and, by gripping a joystick with their snouts, can even play complex video games.

Stanley Curtis, Professor of Animal Sciences at Pennsylvania State University, says: “Pigs are amongst the most intelligent animals on Earth”. They are on a par with dolphins and sea lions in understanding symbols and identifying objects. They can show an emotional response in anticipation of different events and have some understanding of time. 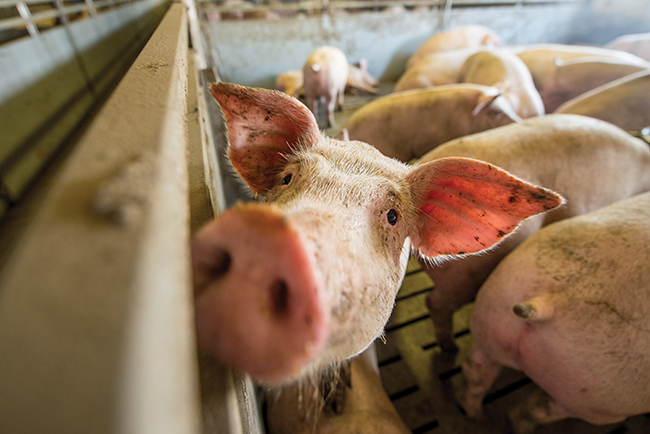 “When deprived of play, as they are in factory farms on the crowded slatted pens, piglets do not grow into normal pigs”. Play is essential to many species and appears to be a marker of cognitive complexity. Piglets are extremely fond of play and scamper, jump, hop and play tag in a similar way to puppies.

Unsurprisingly, piglets born in farrowing crates do not develop social or cognitive skills as well as those born into freedom – they are emotionally depressed.

Pigs can distinguish between other pigs by their urine samples, while mothers recognise their litter from sound alone. Like dogs, pigs can differentiate between humans and understand our emotional state! They can also knowingly manipulate other pigs. For example, when one discovers a food source he or she will try to shake off other pigs with various cunning tactics.

I will always remember my friend’s rescued pig who was having his leg treated by a vet. When his car drove up, Benji rolled himself up in a rug so the vet couldn’t treat him!

Another, predictably named Babe, was lovingly kept with a puppy by a colleague who took them both to dog training classes. Babe learned all the commands much quicker than all the pups – but she also learned how to open the fridge and snaffle its contents! Pigs are very bright animals!

Anyone who has been privileged enough to live with pigs knows that each one is an individual, as different from each other as you and me, with his or her own emotions and needs. It may be uncomfortable for meat eaters to acknowledge this, but it’s true. 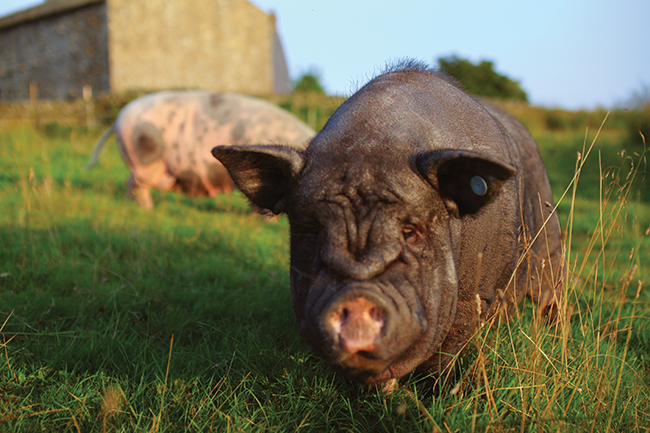 Aggression amongst wild pigs who have ample space is minimal and characterised by threatening and submissive postures based on a dominance hierarchy related to age and size. On factory farms, every aspect of a pig’s life is managed, including companions, stocking rate, reproduction and feed. They’re often housed together in groups of the same age in overcrowded conditions, resulting in fights to establish a hierarchy. We’ve filmed bullying on many farms, unlike wild pigs who sleep in communal nests, live sociable lives and even help with the ‘housework’.

To house intelligent, fun-loving, social, complex, tactile creatures in dirty, wooden-slatted pens with only a ball or chain for stimulation is insulting, immoral and cruel. It’s the mighty oak forests and shrub lands where they belong. Support Viva!’s campaigns for pigs: viva.org.uk/faceoff, viva.org.uk/hope-not-hell, viva.org.uk/swine and buy Viva!’s report, £5, at vivashop.org.uk/pigreport.

Juliet Gellatley (BSc Zoology and Psychology; nutritional therapist, DIP CNM; Dip DM) is the founder and director of Viva!, a charity working to promote veganism and to put an end to animal suffering.