Are you ready to take your vegan culinary skills to the next level? This vegan salt and pepper prawns recipe makes a great appetiser for parties when you’re looking to impress.

It’s guaranteed to get your guests talking as they won’t believe these tasty morsels are 100% vegan!

This vegan salt and pepper prawns recipe is made from seitan which gives it a meaty bite and is cleverly flavoured with seaweed to give them a fishy flavour without the cruelty.

Wheat gluten has been a popular protein source in China for thousands of years thanks to its realistic meaty texture.

The vegan prawns are then wrapped in rice paper to create the prawn ‘skin’ and deep-fried until they are beautifully crispy.

The vegan salt and pepper prawns must be served while they’re still hot and crunchy to enjoy them at their best.

Do you enjoy getting creative with vegan ingredients?

You won’t believe these vegan fish recipes are vegan! 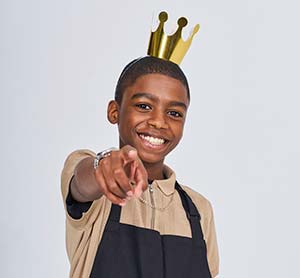 Thirteen-year-old Omari is the youngest award-winning vegan chef in the UK is the presenter of CBBC series What’s Cooking Omari? He is also the founder of vegan snack food company, Dipalicious. He lives with his family in London, runs his own cookery YouTube channel and is passionate about helping other children embrace plant-based diets. His first book, Omari McQueen’s Best Bites, was published by Scholastic in January 2021.