“Glossy, silky-soft rice noodles, turbo savoury flavours, and all the magic of that breath of the wok – this is a Malaysian classic worth getting to know.” – Shannon Martinez

However, unlike the traditional Malaysian dish, this vegan Penang Char Kway Teow recipe swaps out the animal ingredients for plants.

In place of seafood, you will use your favourite mushrooms in this recipe. King oyster mushrooms work particularly well as a seafood alternative thanks to their scallop-like texture.

This vegan Penang Char Kway Teow recipe is a flavour explosion thanks to the rich dark soy sauce blend. Made with kecap manis, it’s sweet, salty and pairs perfectly with the fresh ingredients.

Enoki mushrooms are also a great addition thanks to their spaghetti-like shape that allows them to blend seamlessly with the other ingredients in the recipe.

Once you’ve cooked your veggies and noodles in a wok, you’ll cook the egg mixture in the base of the pan and combine it with the rest of the ingredients to make a satisfying and healthy vegan dinner.

Find this delicious recipe and more in the Vegan with Bite cookbook by Shannon Martinez, published by Hardie Grant Books. Image credit: Nikki To and Hardie Grant. 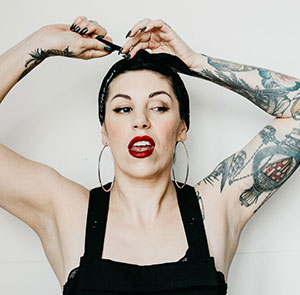