Set the scene this Christmas with this vegan gingerbread cheesecake complete with a cosy gingerbread house topper. The vegan cheesecake is flavoured with tempting spices such as ginger and cinnamon and is a great nut-free dessert for the whole family.

One thing we vegans are great at is putting a fresh spin on an old classic! Instead of sticking with a traditional vegan Christmas pudding, make something new with this vegan gingerbread cheesecake recipe.

Unlike many vegan cheesecake recipes, this recipe is entirely nut-free as it can be made with dairy-free soft cheese and silken tofu. Coconut oil helps to bind the ingredients in both the base and the filling together, which is beautifully flavoured with ginger and cinnamon.

The vegan gingerbread topper is a fun recipe for kids to make during the holiday where they can let their imaginations run wild with the decorations.

Sweetened with blackstrap molasses, it’s a nostalgic vegan dessert that looks fantastic on the dinner table.

For the gingerbread house:

For the vegan gingerbread cheesecake: 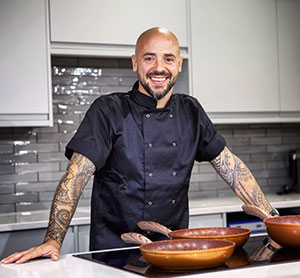 Stu Hensall is the Executive Chef for Quorn and Cauldron and a former contestant on The Great British Bake Off.