Want dinner in just 20 minutes? This crispy tofu and leek stir-fry is about to become your new go-to midweek vegan meal! Making the most of leeks at their best, this easy dinner is a great meal for the colder months thanks to the chillis giving it a warming kick.

Famously associated with Welsh Saint David, the leek has been cultivated and used for cooking for more than 3,000 years. During the Middle Ages it was the original health food, high in fibre, good for purging the blood, keeping colds at bay, healing wounds and alleviating the pains of childbirth.

Leeks are one of the few indigenous British vegetables that are ‘in season’ throughout the Autumn and Winter months.  They are also great for our health, a natural pre-biotic they feed the healthy bacteria in your gut, while also being a natural antioxidant and a good source of folate and Vitamin B.

In partnership with British Leeks, vegan food blogger Lucy Parker @lucy_and_lentils, has created this tofu and leek stir-fry to celebrate leeks, which are in season throughout the Autumn and Winter months in the UK. Enjoy! 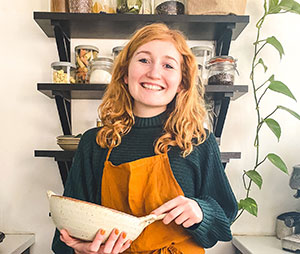 Lucy is a food photographer, food stylist, content creator and recipe creator based in Nottingham.