These fluffy vegan bao buns with tempeh are a recipe to try at the weekend when you have a little more time, or if you’re cooking for a crowd. They are surprisingly easy (and fun!) to make at home.

Here we have paired them with peanut tempeh and a fresh citrus slaw, but you can try them with so many different fillings.

To make this tempeh bao recipe, you will need a bamboo steamer which you can find online or in most Asian supermarkets. They’re also great for when you’re making vegan duck pancakes too.

So what are bao buns? They’re steamed buns made from a white dough that are traditionally filled with pork, but which can be filled with anything you like!

Made with a mix of flour, yeast, sugar, baking powder, milk and oil, it’s easy to make vegan bao buns by swapping the milk to your favourite plant milk.

Making these vegan bao buns is simple. First you’ll combine all of the dry ingredients for the bao in a bowl before slowing stirring in the milk.

However, because the buns are made from yeast, you will need to make sure that the milk is not hot otherwise you won’t achieve fluffy vegan bao buns.

Then you’ll use your hands to form the bao dough into a ball before kneading until a smooth dough has formed.

The vegan bao bun dough needs to rise, so leave it somewhere warm until it had doubled in size and give it a quick knead once it has.

You can then roll the dough into 10 small balls and roll them out into oval shapes. Then, fold the ovals of dough in half and place a piece of baking paper in the middle to stop them sticking together.

Leave the dough for another 30 minutes to ensure you have light, fluffy vegan bao buns that hold their shape when steamed. You can prepared the tempeh for your vegan bao while you wait.

Looking for more ways to use tempeh?

You have to try these smoky tempeh burgers! 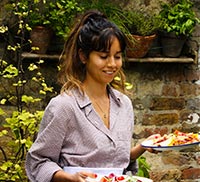 Sadie is a plant-based chef who loves to create innovative dishes using mostly whole foods and celebrate ingredients in a natural way. She recently graduated from Le Cordon Bleu with a Diploma in plant-based cooking, and is so excited to share recipes that encourage people to eat more plants.