This Christmas, break from tradition and serve your guests this incredible vegan sticky toffee Biscoff pudding! It really does have to be tried to be believed.

Your Christmas dessert should be a showstopper, but if you ask us, traditional Christmas pudding just doesn’t quite cut it.

So this year, why not create a spectacular vegan Christmas pudding that will wow your guests. Although it might look like a Christmas pudding, this vegan Biscoff pudding is actually a sticky toffee pudding topped with a rich butterscotch sauce.

Served with vegan Biscoff custard, it’s the ultimate festive indulgence. We guarantee everyone will be asking for the recipe for this vegan Biscoff pudding when they taste it!

To save time on the day, the vegan Christmas pudding can be made the day before and stored in an air-tight box.

Like any good sticky toffee pudding should be, it’s sweetened with dates to give it a rich caramel flavour.

You won’t be able to resist licking the spoon as you make the vegan Biscoff custard either as the sweet smell of cinnamon and vanilla will make your mouth water.

The scrumptious vegan butterscotch sauce is quite literally the icing on this epic vegan Christmas cake!

Finally, if you really want to push the boat out and serve up something spectacular – you can decorate your vegan Biscoff pudding with edible gold leaf and a dusting of lustre for added sparkle.

For the butterscotch sauce:

To decorate (optional) and serve:

Are you looking for inspiration for your vegan roast dinner?

You won’t miss the meat with these tasty vegan roast recipes. 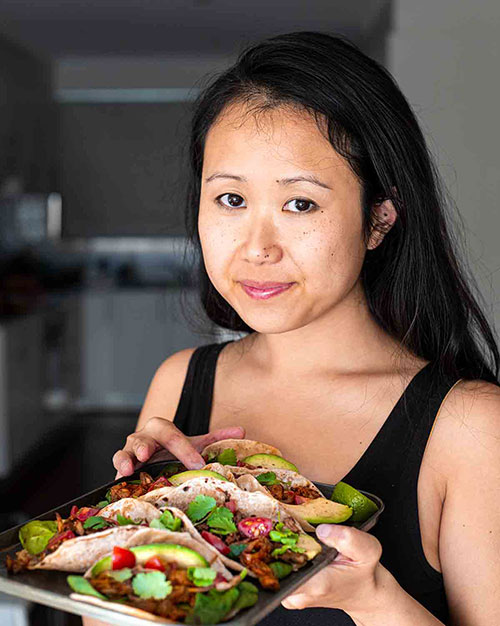 Anthea is a food blogger, creator of the popular Instagram account @rainbownourishments, freelance recipe developer, food photographer and chef. She loves sharing wholesome vegan recipes with a twist and is particularly fond of baking. She released her first vegan cookbook, Incredible Plant-based Desserts, in 2019.