Whenever we ask fellow vegans what they would like to see a readymade vegan version of, one of the answers is always vegan Yorkshire pudding.

We’re sad that they’re not available to buy yet either, but you don’t have to despair as we have a delicious homemade vegan Yorkshire pudding recipe here that will make you wonder why you ever wanted a supermarket version

Historically Yorkshire puddings were the traditional accompaniment to roast beef on a Sunday, but they became loved as a tasty treat in their own right. Soon, all Sunday roasts featured a Yorkshire on the plate and they can even be found in giant Yorkshire form, acting as the plate and being filled with sausages, veg and mash.

We don’t believe that vegans have to miss out on anything, which is why we love this delicious recipe by Richard Church.

Why aren’t vegan Yorkshire puddings available to buy yet? Well, the traditional recipe can be difficult to adapt as there isn’t an easy substitute for the egg. Many replacements create a more cake-like texture, whereas what you’re looking for in a good Yorkshire is a light, fluffy and crispy batter.

While Richard has managed to perfect the texture here, mass creating it and getting it right for large batches may not be quite so easy!

But what’s the secret to a good vegan Yorkshire pudding? Make sure you put some oil into the muffin tin and heat it up in the oven until it’s smoking hot, before the batter goes anywhere near it. Then just be very careful, because hot oil can splash.

The greatest thing about this vegan Yorkshire pudding recipe is that it can be made gluten-free too, so no one has to miss out on the treat.

Want to know what to serve with your delicious vegan Yorkshire puddings?

Here are some great vegan roasts that would make the perfect accompaniment. 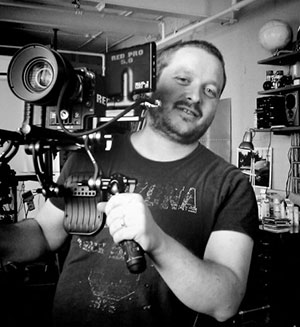 Richard Church is a portrait photographer and plant-based food blogger living and working in London. He’s been passionate about food since he was thirteen years old, when he made his first pizza from a cookbook. In the spring of 2014, he decided on a whim to go vegan. Richard was a voracious meat eater up until then and thought he would last about 2 weeks before giving up. But he’s never looked back…