Warm vegan cinnamon rolls are one of those bakes that are a delicious treat at any time of day!

These soft and fluffy vegan cinnamon rolls are filled with a classic sweet cinnamon sugar centre and topped with icing. This is a classic bake that never fails to please.

You might think these vegan cinnamon rolls are difficult to make, but don’t be daunted by using yeast in your bakes as these are actually so easy to make and are ready in under an hour.

Do you love the sweet and salty combination of peanut butter and jam?

Then start your day with a big old stack of these epic vegan peanut butter & jam pancakes! 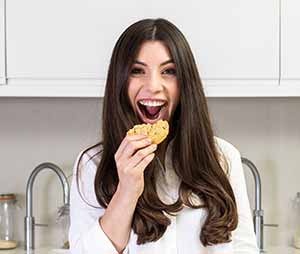 This recipe has been adapted by Bari in collaboration with Fibre February, a campaign that demonstrates the importance of getting enough fibre in our diets and reversing negative connotations surrounding eating flour-based products.