Here are 19 tasty vegan jackfruit recipes that you can make with canned jackfruit to help you make the most of this versatile fruit.

Jackfruit has become the go-to ingredient for compassionate cooks thanks to its versatile nature which means it can be transformed to replace meat in a wide range of plant-based dishes from fishless pies to pulled ‘pork’ burgers.

Most people don’t really think beyond pulled jackfruit, but there are so many different things you can do with it. And the handy thing is, tinned jackfruit can be kept in the cupboard for emergencies, so it’s a real storecupboard staple.

If you’re wondering just what is jackfruit then don’t miss our guide on how to cook it.

How do you use canned jackfruit?

Those of us in the UK are unlikely to have to prepare a fresh jackfruit when whipping up meat-free meals as these days it is becoming increasingly common to find tins or vacuum packs of pre-prepared, unripe jackfruit in stores.

If you’re making a savoury dish, try to find unripe jackfruit that has been canned in brine rather than syrup as the fruit will soak up the sugar from the syrup and make your savoury dishes too sweet.

Firstly, you will need to rinse the fruit well before placing it into a tea towel. Wrap the jackfruit up tightly and squeeze to remove as much excess liquid as possible. This will allow the jackfruit to take on more flavour when marinated and helps give it an even meatier texture.

Once you’ve squeezed the jackfruit, remove the hard core at the centre of each bulb. You may also find some seeds remaining in the bulbs so make sure you remove these too.

Next, place the jackfruit into a large bowl and shred the using forks to break apart the bulbs to give it a shredded texture similar to pulled pork.

Now you’ve got to grips with jackfruit, here are 19 of the tastiest vegan jackfruit recipes you can make with canned jackfruit.

This classic Chinese dish gets a vegan makeover using jackfruit to mimic the texture of duck in these vegan jackfruit duck pancakes. Serve with pancakes, cucumber, spring onion and lashings of Hoisin sauce for an authentic homemade takeaway dinner. 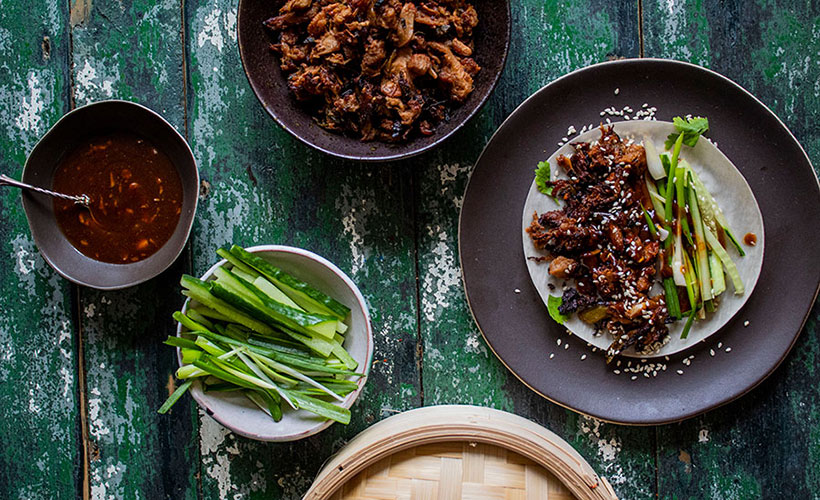 Sweet, sticky and smokey, these vegan ribs are made using a clever combination of seitan and jackfruit.

They’re surprisingly realistic and you’ll be licking your fingers to get another taste. 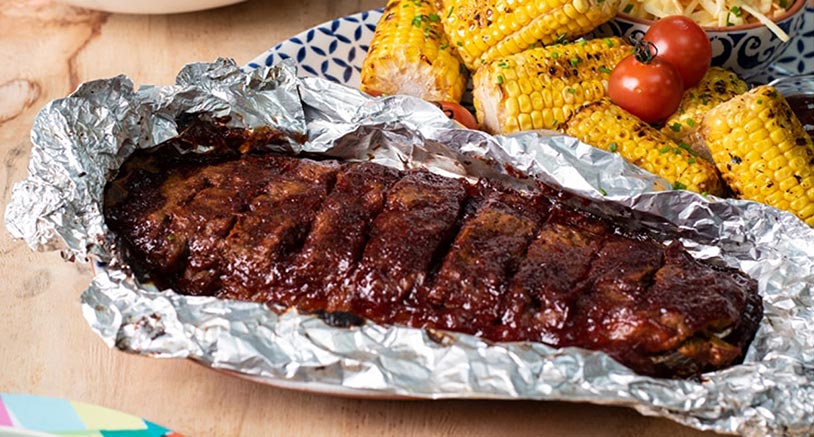 Is there anything jackfruit can’t transform into? We say no! Here it is again, this time it’s masquerading as crab in these yummy crab-free cakes in this enticing jackfruit recipe. 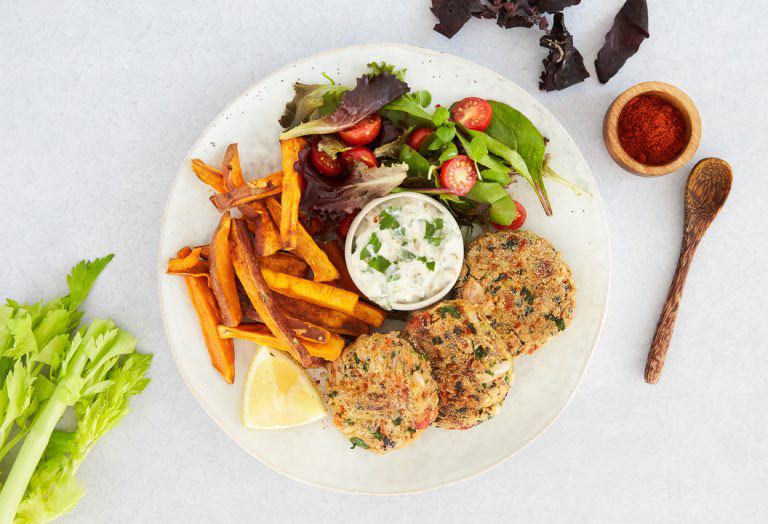 Many jackfruit recipes featured pulled jackfruit, but here we’ve kept it in chunks so it can soak up all the delicious teriyaki sauce.

The combination of the sweet teriyaki glaze paired with the savoury fruit is a real treat. Serve it with sticky rice and fresh veggies for an easy and healthy vegan dinner.

You’ve probably heard all about the delights of pulled jackfruit, so now is your chance to try it for yourself with this easy vegan pulled BBQ jackfruit burger.

The sweetness of the jackfruit and BBQ sauce are a winning combination paired with the tangy vegan coleslaw. 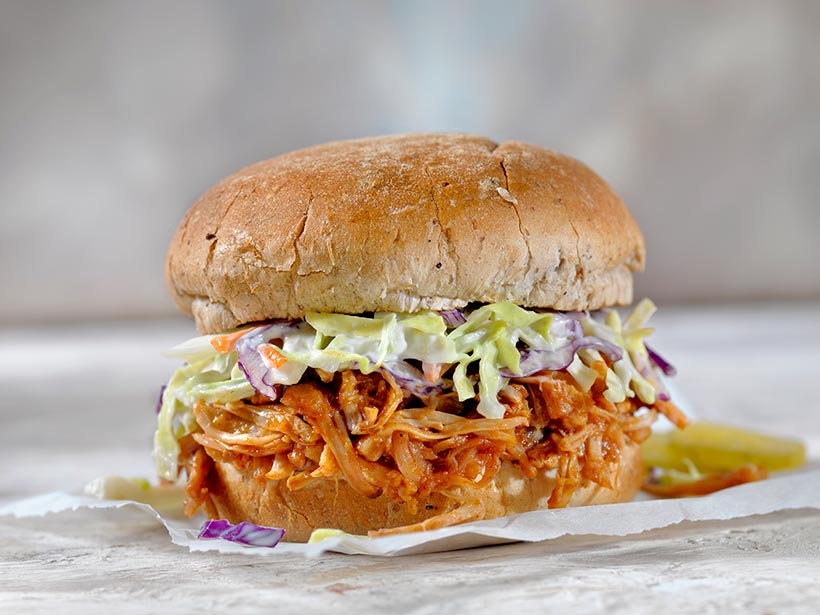 These meat-free tacos draw inspiration from Mexican and Indian cuisine with their refreshing blend of hot and herby flavours. Pairing spicy jackfruit with a cooling chutney, this delicious fusion jackfruit recipe is a must-make.

This ocean-friendly vegan fish pie recipe has all flavour and texture of a traditional fish pie. We’ve swapped fish for jackfruit to provide a similar flaky texture, while nori adds a fishy flavour. This a great easy jackfruit recipe when the weather gets cold. 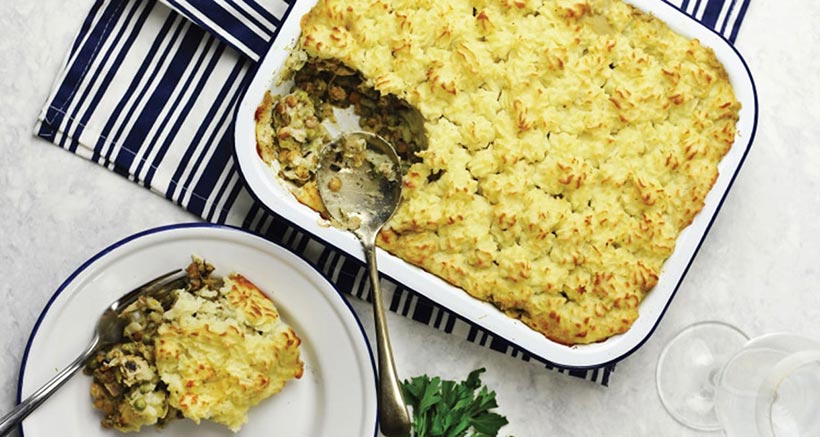 Although it’s often used to replace pulled pork, jackfruit can also transform into tuna with a little seasoning. If you need an easy and healthy dinner, give this vegan jackfruit tuna mayo recipe a try. 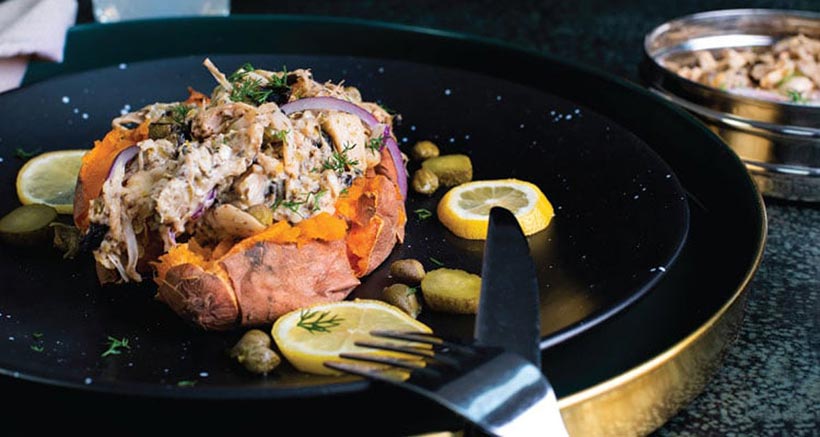 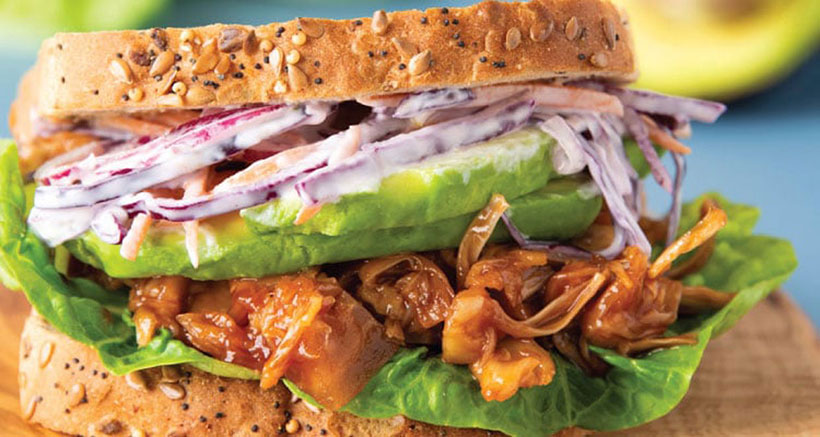 Recreate the delights of a tuna pasta salad by harnessing the power of jackfruit in this tasty vegan lunch recipe. It’s got all the elements of the classic salad, including crunchy sweetcorn, red onion and a dollop of homemade mayo that makes for an irresistible vegan tuna pasta salad. 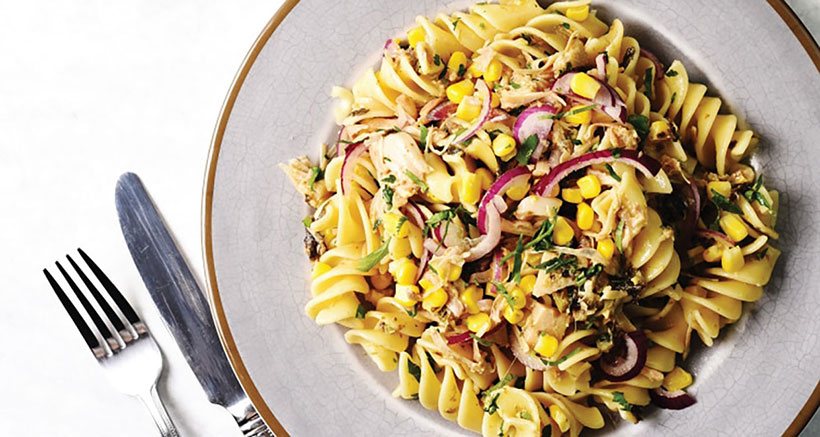 This vegan Korean fried jackfruit is tossed in a sticky, spicy, sweet and sour Korean-style sauce made with gochujang, a fermented red chilli paste. 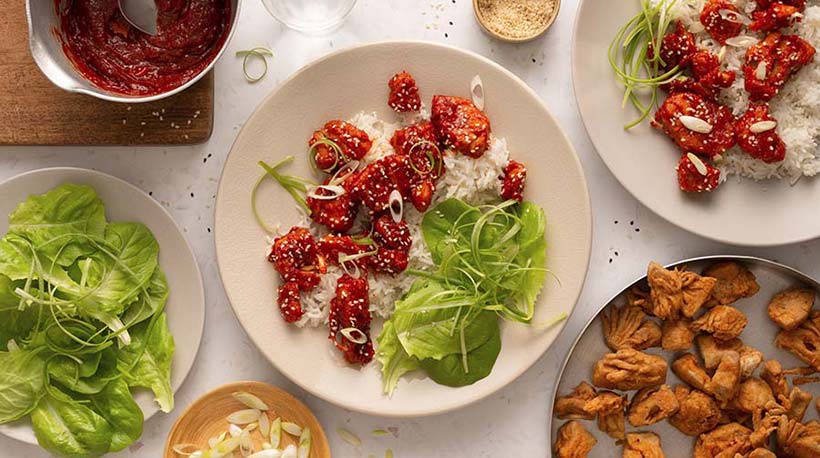 This jackfruit curry is flavoured with a medley of health-boosting spices to pack it with flavour and nutrients. Plus, it’s great to make when you’re short on time as it’s ready in just 40 minutes! 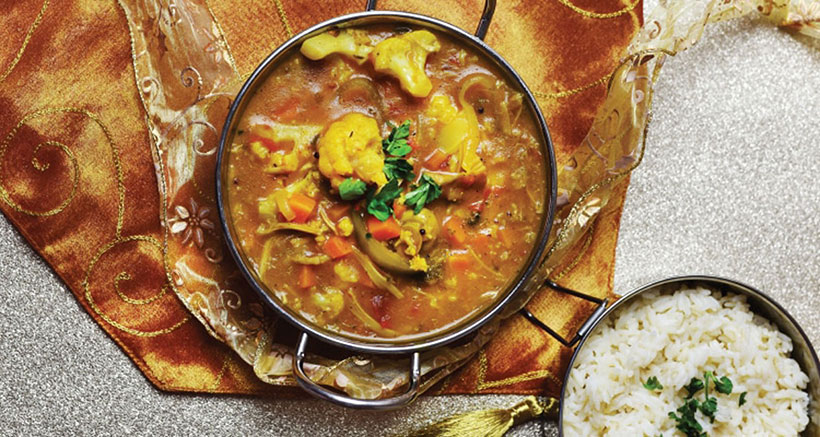 If you’re hosting a dinner party and looking to impress then this delectable jackfruit recipe is sure to get the party started. Featuring paprika jackfruit stack atop a bed of crushed winter vegetables, it wouldn’t look out of place at a gourmet restaurant! 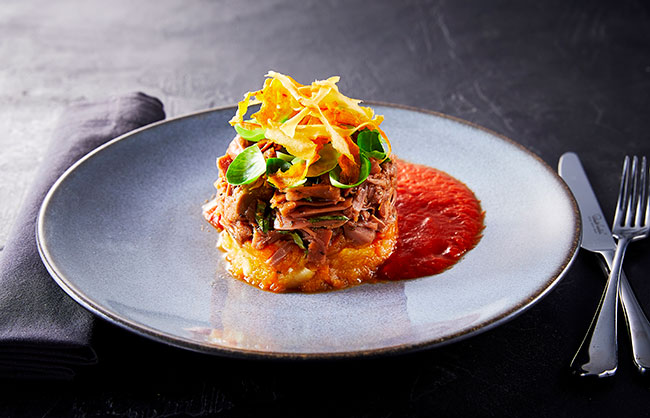 The sweetness of the sweet potato is the perfect pairing for the tangy BBQ beans and creamy slaw in this super healthy vegan dinner. It’s a great way to use canned jackfruit as you can make the bean mixture and slaw the day before if you need to prep ahead for the next day. 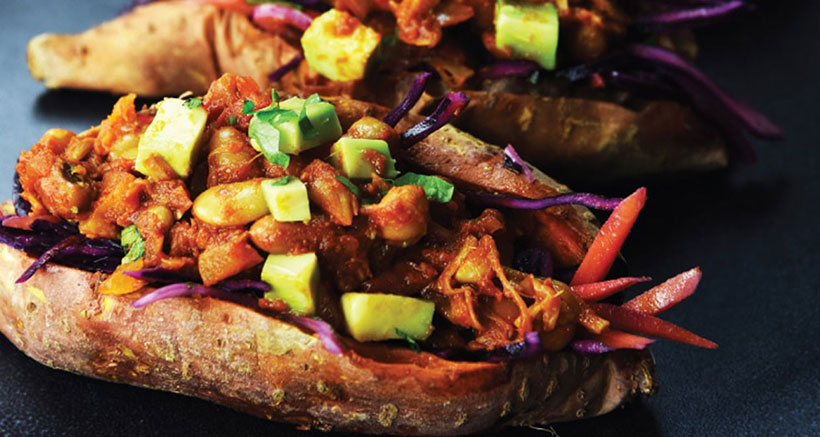 Keep turkeys off your plate this Christmas and opt for deliciously seasoned jackfruit for your Christmas dinner instead. Not only is it cruelty-free, but it also more flavoursome and has a more appealing texture than turkey so will be a hit with vegans and meat-eaters alike! 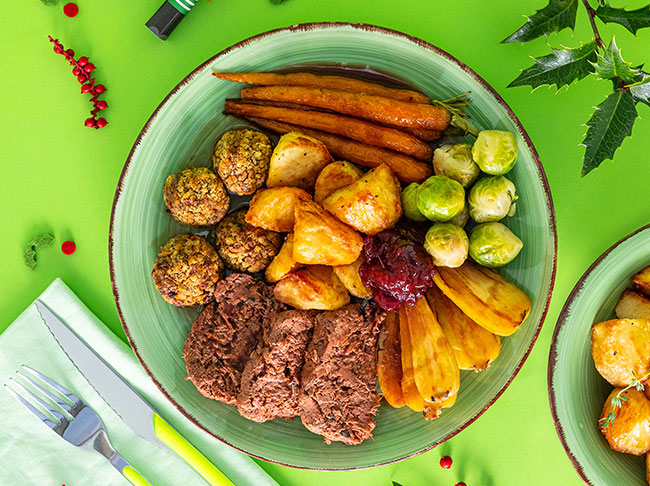 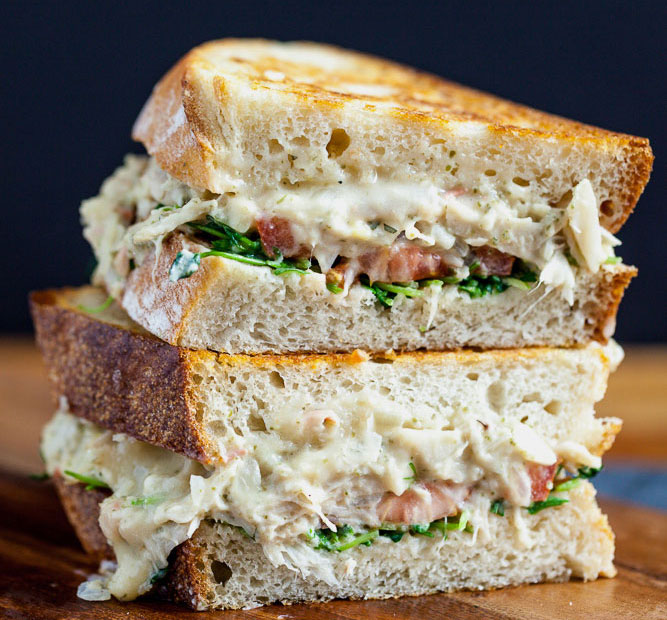 Jackfruit doesn’t just make a great pork replacement, it’s also great in dishes that would traditionally contain chicken such as a pot pie. This one is creamy and delicious and so easy to make. 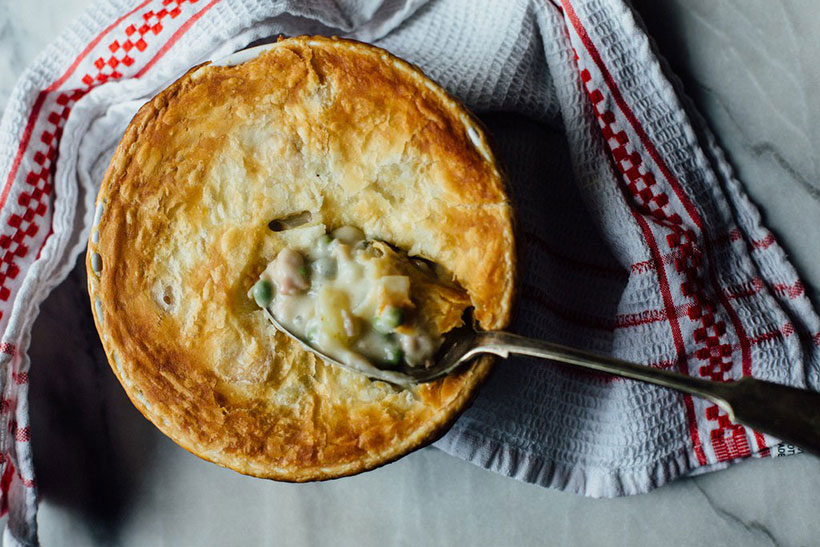 Party food just went to the next level thanks to jackfruit! 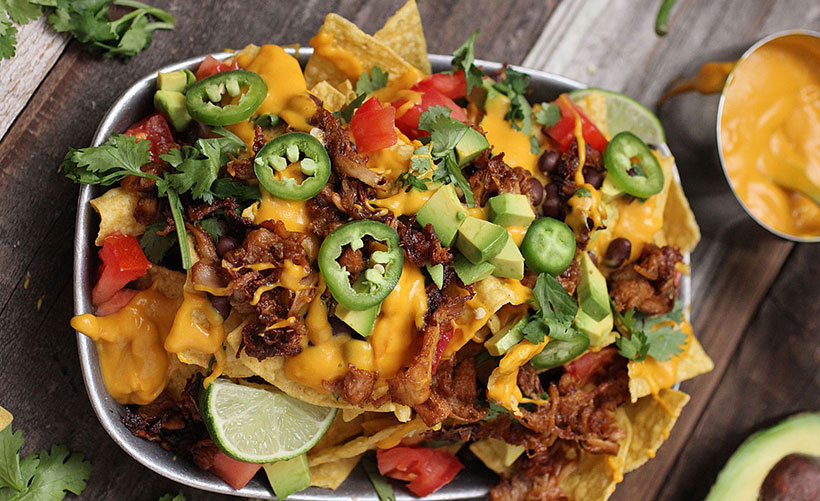 This Greek-favourite is now vegan-friendly thanks to jackfruit and mushrooms which replace pork perfectly. Load ’em up with onions, lettuce and tomato and wrap them up in a fluffy flatbread for the full Gryros experience. 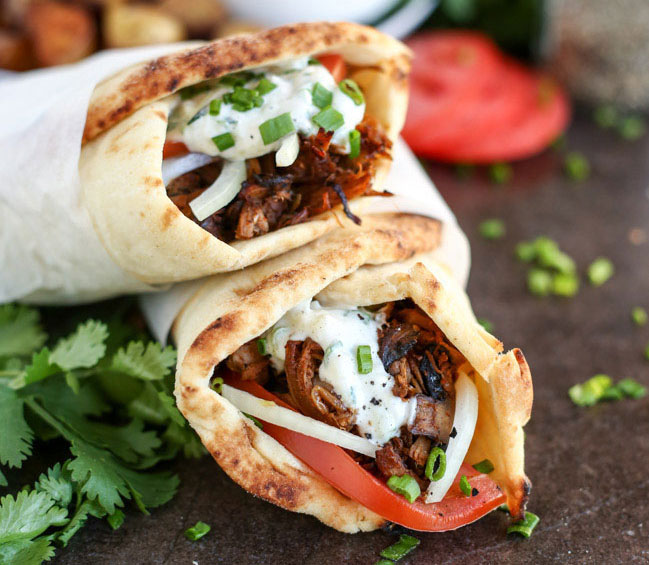 Feeling inspired by these vegan jackfruit recipes to try some new ways of replacing meat in your meals?

Why not try these tasty vegan seitan recipes.