89 vegan quotes to inspire you, humour you, and provoke you

Get ready to laugh, cry and become inspired by our favourite vegan quotes. From funny vegan quotes and memes to quotes on vegan living, these words will empower your vegan life.

Words are a powerful tool when it comes to making a positive change.

Often, a few sentences can alter our perception of something and inspire us to change our lives for the better.

Vegan activists, authors, and even vegan celebrities have made us think about how society mistreats animals and what role we can all play in fighting against these injustices.

There are thousands of quotes on vegan living available across the internet and in libraries. Luckily, we’ve condensed our favourite inspiring saying all in one place.

From Disney movies to vegan academics and quotes about vegans, these words will empower your vegan life…

2. “Plants are infinite – this diet isn’t limiting and there’s so much more to explore! That’s what excites me about it most.” Denai Moore on the Simply Vegan Podcast

4. “If you don’t take care of this the most magnificent machine that you will ever be given…where are you going to live?”― Karyn Calabrese

5. “We can eat meat, but we don’t need to eat meat – if you have a choice, why wouldn’t you choose compassion?” – Louise Palmer-Masterton on the Simply Vegan Podcast

6.“It takes nothing away from a human to be kind to an animal.” -Joaquin Phoenix Looking for more vegan inspiration? Check out these articles next:

7. “I personally chose to go vegan because I educated myself on factory farming and cruelty to animals, and I suddenly realised that what was on my plate were living things, with feelings. And I just couldn’t disconnect myself from it any longer.” -Ellen DeGeneres

8. “If we all come together and find common ground, we can create magnificent change in this world” – Dan McKernan, Simply Vegan Podcast

9. “May our hearts overcome our appetite” – Melbourne Pig Save

10. “Vegan food is soul food in its truest form. Soul food means to feed the soul. And to me, your soul is your intent. If your intent is pure, you are pure.” – Erykah Badu

11. “Let’s help the earth and all living beings on this planet by making conscious choices about the food we eat and let the healing begin.” – Genesis Butler

12. “The more we understand about life, in general, the more we value the lives of all creatures.” -Paul Johnson

14. “My body will not be a tomb for other creatures.” – Leonardo Da Vinci

15. “I’m vegan for animals because they deserve to live in peace just like we do.” – Genesis Butler

16. “Anyone who makes a change, embrace it, celebrate it, be excited and proud about it.” – Alicia Silverstone, Simply Vegan Podcast

20. “The day my heart spoke louder than my stomach, my life changed forever.” – Anonymous

21. “Animals are not ingredients.” – Barbara Thompson

22. “Animals are my friends and I don’t eat my friends.” – George Bernard Shaw

23. “The soul is the same in all living creatures, although the body of each is different.” – Hippocrates

25. “Seven years ago I was at rock bottom. I was certain I’d die and had given up hope. It was one of the hardest periods of my life, but slowly I rebuilt my life and my health was getting better. I’m in no doubt veganism has helped save my life.” – Aaron Calder

28. “To me, veganism is not synonymous with ‘clean eating’ and ‘gluten-free’. Those are simply dietary choices. I think the root of this whole lifestyle is compassion.” – Evanna Lynch

29. “You have two homes: Earth and your body. Take care of them.” – Anonymous 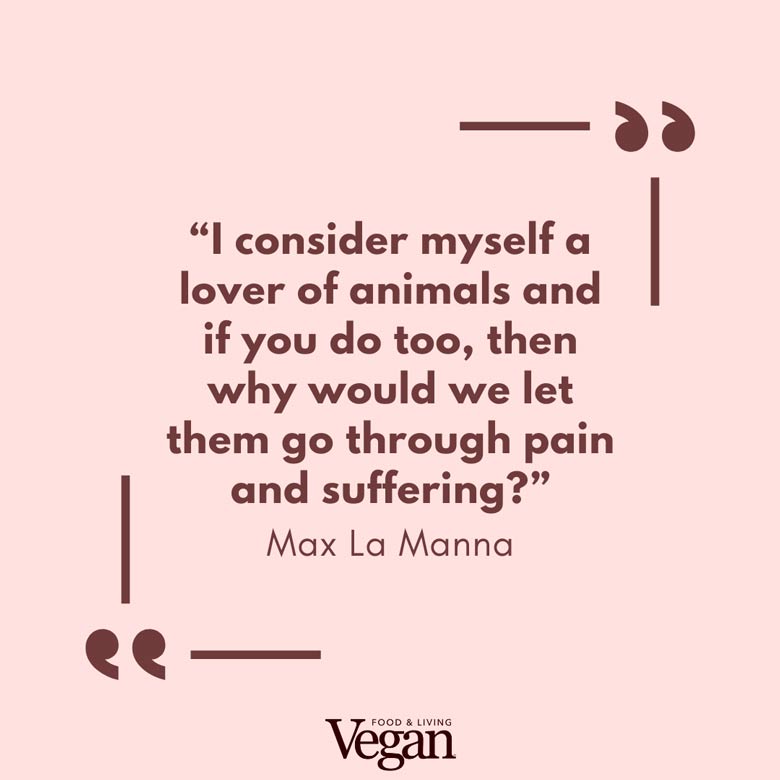 30. “I consider myself a lover of animals and if you do too, then why would we let them go through pain and suffering?” – Max La Manna

32. “Every person that I have met who has gone vegan says it is the best decision they have ever made” – Lewis Hamilton

33. “Animals are not voiceless, you are not listening.” – Anonymous

34. “My only regret about going vegan is not doing it sooner.” – Anonymous

36. “If you think that being vegan is difficult, imagine being a factory-farmed animal.” – Davegan Raza

37. “I’m a vegan. I respect the environment, and I do my best to spread the importance of such an issue.” – Jared Leto

38. “Sometimes the right path is not the easiest one.” – Grandmother Willow, Pocahontas

39. “People think being vegan is some weird thing. That’s one argument that I’m willing to have because I know that I’m always going to win.” – Sadie Sink

47. “We’ll stop using straws to save fish, but won’t stop eating fish to save fish.” – Anonymous

48. “The most difficult part of being vegan is waking up at 5 am to milk almonds…” – Anonymous

50. “Happiness is finding out there are vegan options.” – Anonymous

51. “No one cares about protein intake until they found out you’re vegan.” – Anonymous

52. “If bean juice can become a macaroon, you can do anything.” – Anonymous

53. “I love being vegan from my head tomatoes.” – Anonymous 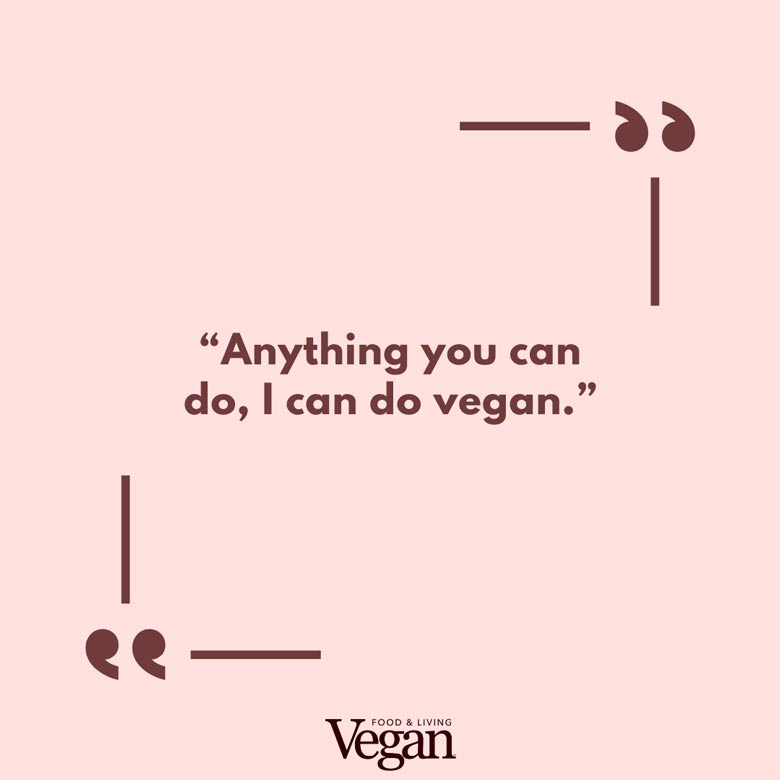 62. “If you don’t want to invite me as a result of that [being vegan], great! I don’t want to come to your house.” – Romesh Ranganathan

64. “Are there social pressures that encourage you to continue to eat, wear, and use animal products? Of course. But in a patriarchal, racist, homophobic, and ableist society there are social pressures to participate and engage in sexism, racism, homophobia and ableism. At some point, you decide who you are and what matters morally to you. And once you decide that you regard victimising vulnerable nonhumans is not morally acceptable, it is easy to go and stay vegan.” – Gary L. Francione

66. “If slaughterhouses had glass walls, the whole world would be vegetarian.”― Linda McCartney

67. “Most people who eat meat have no idea that they’re behaving in accordance with the tenets of a system that has defined many of their values, preferences, and behaviours. What they call ‘free choice’ is, in fact, the result of a narrowly obstructed set of options that have been chosen for them.” – Melanie Joy

68. “Farmers love their animals and want only the best for them, while still profiting from sending them to a slaughterhouse to be killed. It is undeniably a contradiction to claim to love someone who you intend to kill for money.” – Ed Winters 69. “It requires 20 times more land to produce a gram of protein from cows or sheep than it does to produce it from pulses such as chickpeas or soybeans.” – Henry Mance

70. “Who are we to say dogs and cats have more rights than cows and pigs. They’re all conscious. They feel the same. They hurt the same. God help us understand!” – Izey Victoria

72. “When you truly understand that your food choices are powerful and life-affirming, you can exercise control and restraint without deprivation.” – Marlene Adlemann

73. “I don’t see why someone should lose their life just so you can have a snack.” – Russell Brand

74. “People eat meat and think they will become strong as an ox, forgetting that the ox eats grass.” – Pino Caruso

75. “The love for all living creatures is the most noble attribute of man.” – Charles Darwin

76. “As soon as I found out how animal products were made, I didn’t want anything to do with them.” – Genesis Butler

77. “The human body had no more need for cows’ milk than it does for dogs’ milk, horses’ milk, or giraffes’ milk.” – Dr. Michael Klaper

78. “If we can’t tell children what happens to farm animals. Maybe what we’re doing to the animals is wrong.” – Anonymous

79. “We are, quite literally, gambling with the future of our planet – for the sake of hamburgers.” – Peter Singer

80. “We cannot have peace among men whose hearts find delight in killing any living creature.” – Rachel Carson

81. “I wouldn’t eat my dog, why am I eating all these other animals?’ – Matt Pritchard

82. “The amount of waste that is created to produce animal products is way more destructive than the pollution of vehicles.” – Max La Manna

83. “Being vegan isn’t about restricting oneself in any way, it’s simply about ceasing to take things that clearly are not ours.” – Mango Wodzark

84. “The food you eat can be either the safest and most powerful form of medicine or the slowest form of poison.” – Ann Wigmore

85. “There is something about veganism that is not easy, but the difficulty is not inherent in veganism, but in our culture.” –  Will Tuttle

86. “Adding ‘humane’ before slaughter doesn’t cancel out the slaughter. It cancels out your guilt.” – Anonymous

87. “Integrity is choosing courage over comfort; choosing what is right over what is fun, fast, or easy; and choosing to practice our values rather than simply professing them.” – Brené Brown

88. “To my mind, the life of a lamb is no less precious than that of a human being.” — Mahatma Gandhi

Looking for more vegan inspiration? Check out these vegan celebrities who share why they went vegan

All artwork is created by Vegan Food & Living. Do not use without permission.