Dan, a 14-year-old vegan crusader, talks us through his experience of being vegan among his peers and his vegan life… 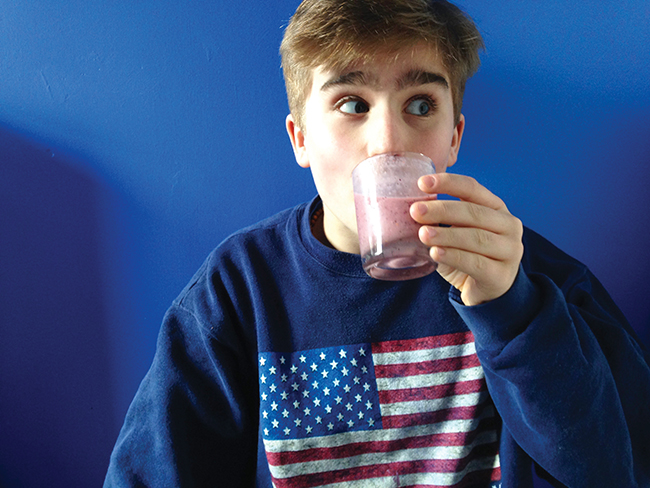 I was an avid meat-eater until the age of 10. Hoisin duck wraps, sticky chicken wings, chunks of salami, spare ribs, chipolatas, chilli prawns…. these were a few of my favourite things. But one day my mother and I cut out red meat as part of a vegetarian transition. We carried on eating poultry, but not for long as we were both poisoned after eating roast chicken. Strangely, my sister was not affected. That was it for eating meat and fish followed soon afterwards.

I started to look into animal welfare and soon found out the gory truth about the meat industry. I also learned how animals contribute towards global warming more than all of the transportation methods in the world –due to cows farting a lot and producing too much methane!

As soon as I went vegan in October last year, I started to have so much more energy than I had when I ate animal products. In the morning I can jump out of bed without having to hit snooze on my alarm, and I don’t get that horrible ‘bloated’ feeling after having a heavy meal.

A lot of people say they care more about humans than animals but, if you think about this, because of the huge demand for meat, the grains and water that could have been given to humans has been given to animals. 795 million people in the world do not have enough food to eat, while the rest of the world has an over-abundance of food and obesity is a growing concern.  People also think that animals are less ‘intelligent’ than humans, but what is intelligence? Seeing humans create war on the back of greed, and turning the planet into a giant rubbish tip while many animals are becoming extinct – how can we call ourselves intelligent? The bees all work in the hive without any instructions – just instinct – yet they are dying out too.

At almost every meal at school I get a different person come up to me and ask things like: ‘where do you get your protein?’ or ‘animals don’t have feelings’ and stupid things like: ‘if you are trying to save the animals then why are you eating their food?’ In addition to this, someone came up to me, who happens to be one of the smallest people I know, and he said ‘if you’re vegan, then how are you going to grow?’ These questions are laughable and only show up people’s ignorance and lack of sensitivity, but they do motivate me more to keep on doing what I do.

I think restaurants need to wake up as well. Sometimes all they have on offer are olives and bread. I mean, come on, we are in the 21st century.

I also think that if you are not willing to go and kill the animal for food or to milk it, take their produce or to shear them, etc. then I don’t think you should be consuming animal products. Most meat on offer in supermarkets is packaged in such a way that people are oblivious to which part of the animal it comes from. You only have to look at the horsemeat scandal to realise half the time people don’t really know (or want to know) what they are eating.

I also find that when you are eating with meat eaters and they ask you why you are vegan, they start to feel uncomfortable when you talk about the food on their plate. Meat is often disguised in names so that consumers don’t feel like they are eating something like pig flesh (bacon).

This may be a generalization, but I think being a vegan boy is harder in school as there are a lot of stereotypes and it isn’t ‘manly’ to not eat meat and ‘you can’t get muscle.’ These are all annoying stereotypical views, which should be abolished! It’s a completely backward attitude.

Survival of the species

Humans are 100% herbivores, because of the way we eat, sweat, digest etc, and so, if you were to give a baby a banana and a baby chick, I think it would be more likely to eat the banana and play with the chick. Something that has never made sense to me is when people go gaga over some ducks crossing a road with their ducklings, yet happily tuck into some hosin duck without flinching.

Canada has launched a big animal protection campaign showing, among other images, a piglet in a farm prison next to someone tucking into a bacon sarni to make people aware of what they are doing. Humans have become desensitised and would rather not know the nasty truth about the animal welfare and industrial concentration camps, because they don’t want to have to change their eating habits.

Soon, hopefully the world will wake up and realise they have been asleep. Vegans are currently only 1% of the world’s population, but we are growing.

I would like to hopefully one day write a cookbook and open a restaurant and shop and start a vegan movement. I honestly can’t imagine ever wanting to eat meat again.