We want to celebrate the vegan celebrities, cook book authors, restaurants and even cities that are doing their bit to advance the vegan movement. Introducing the Vegan Hero Awards...

There are many fantastic people working away to spread the word about veganism and get it recognised more in the mainstream, from vegan celebrities to those wonderful guys making new recipe books to keep us all inspired.

So we’ve decided to launch a set of awards to celebrate all those vegan heroes, as well as the high street restaurants and cafes, and even cities, that are doing their bit to keep driving the vegan movement forwards.

We’ve created the shortlist, now we want you to have your say. It’s time to vote for your favourites…

You’ll also get the chance to win a Cosori Airfryer worth £110 plus £100 of VFC coupons to spend in any store at the end of the voting form, to thank you for taking part. 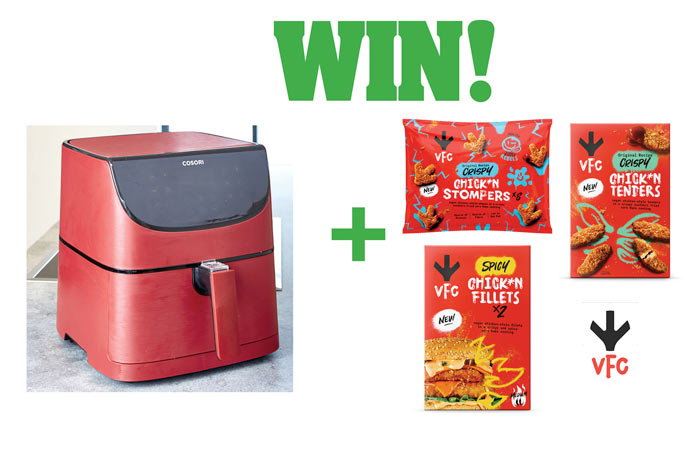 As a thank you for taking part in the voting, you can be entered into a draw to win a Cosori Airfryer worth £110 plus £100 of VFC coupons to spend in any store.

Created by Adam Lyons and Co-Founder, Matthew Glover, VFC is inspired by a sell-out dish on the menu at Adam’s York restaurant, Source.

The Chick*n is made from soya and wheat protein, in an authentic southern fried and crispy cornflake coating, offering the same universally loved experience as traditional fried chicken, as a vegan, sustainable alternative.

The VFC range was created as part of the duo’s activist mission to stop the intensive factory farming of chickens without preaching or finger wagging. Instead, Matthew and Adam want to use the power of positivity, wit and tasty feel-good food as their ‘sit down protest’.

Voting closes on 17th February 2023, so make sure you vote now for your chance to be entered into the draw.