A vegan’s guide to Seattle

Julia Thomas packs her bags and heads for the Pacific Northwest of the USA. The city is one of the fastest growing in the country and that includes catering for the expanding vegan community too.

Known as the Emerald City because of the evergreen landscape that surrounds it, Seattle is celebrated for its beauty, but is also a pioneer of Pacific Northwest cuisine, with innovative chefs and local farmers setting the standard for fresh, wholesome and inspiring dishes.

Plants and ice cream aren’t commonly associated, but Frankie & Jo’s ice cream store uses only plant-based ingredients, making it 100% vegan. There are a variety of flavours to choose from and on the first Wednesday of every month, they launch unique seasonal tastes.

Ice cream comes in a variety of shades, from charcoal grey salted caramel to luminous-yellow ginger. Combine this with pink and green tropical-themed décor and it ensures this is a must-visit for any Instagramming traveler. 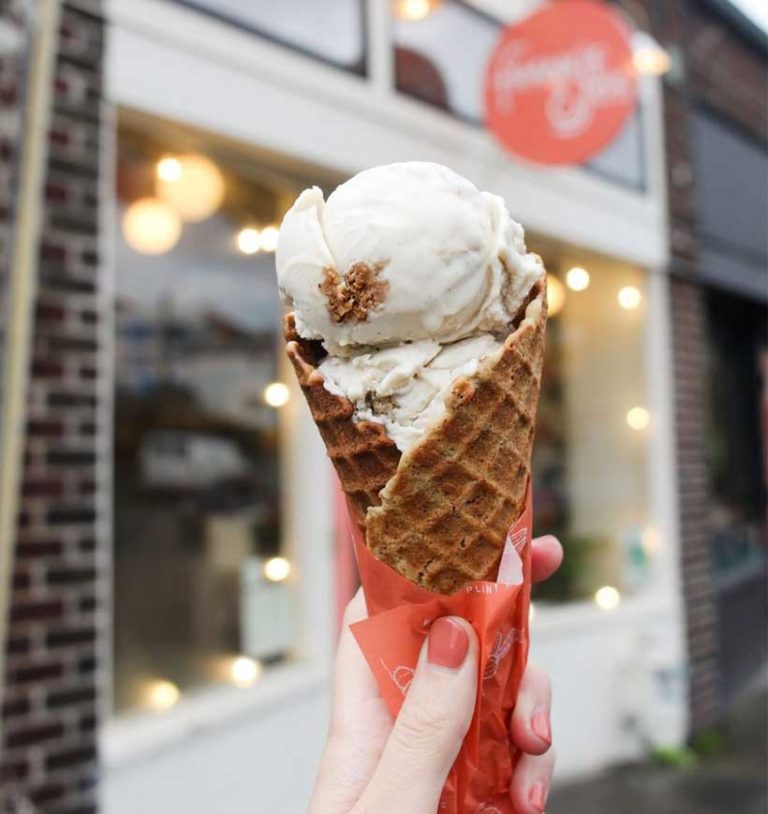 Get your sugar fix at Mighty-O Donuts, an organic and sustainable donut café. All of the ingredients that go into making each delicious donut are organic, sustainably sourced and, of course, vegan.

There are vanilla and chocolate varieties to feast on as well as specialty donuts such as the French Toast, a spiced cake donut with a maple coating, and the Lemon Poppy, a lemon poppy seed donut with a sweet glaze. Mighty-O Donuts has multiple locations in and near Seattle, but its flagship store is in Green Lake. 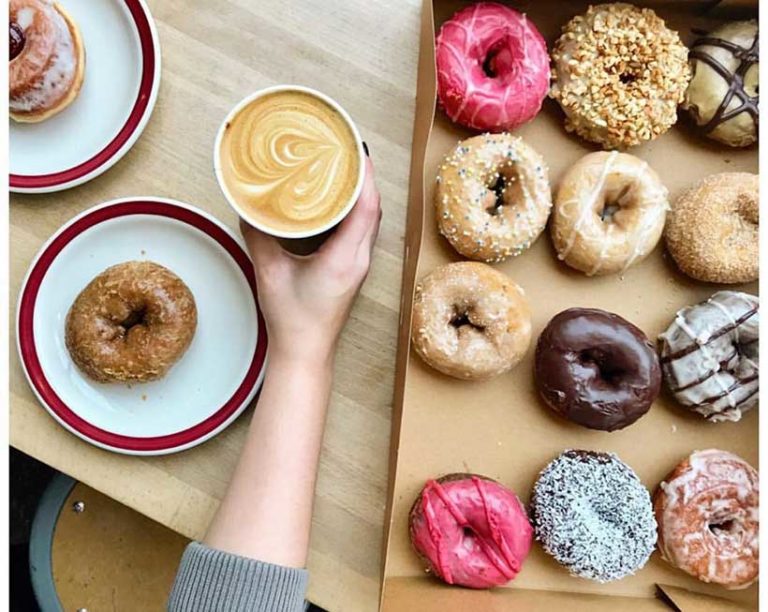 A firm favourite with locals, Highline Bar serves hearty pub grub made entirely from vegan ingredients. On the menu are ‘fish’ and chips, nachos and tacos, as well as thick sandwiches with names such as Crazy Train and Pig Destroyer.

The cocktail menu is as eclectic as the sandwiches – the Electric Wizard combines cucumber and mint with lime, Aperol liqueur and soda water – and there’s also a wide selection of craft beers. Highline Bar also hosts live music and events most nights of the week. 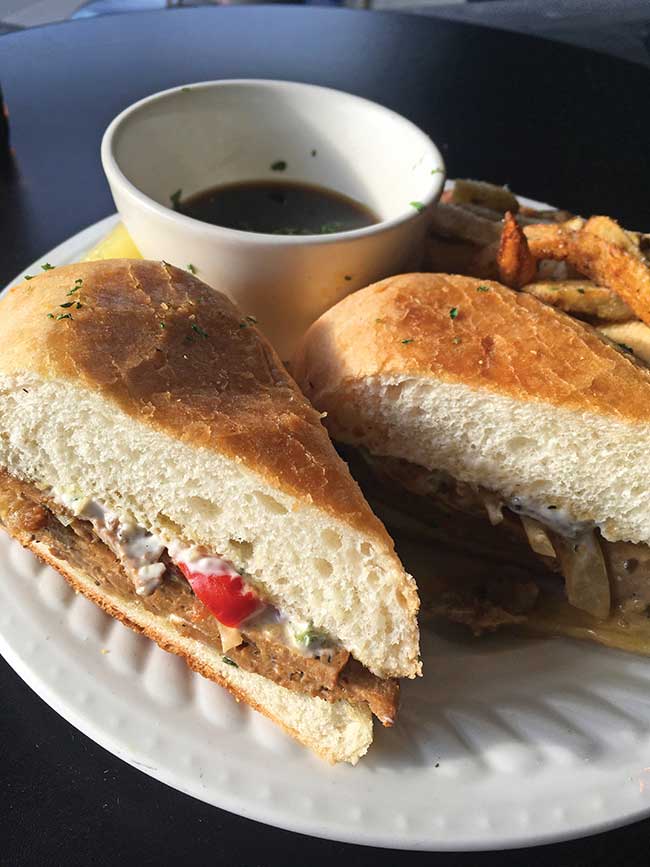 What started out as a simple food truck in 2014 is now one of Seattle’s most popular vegan restaurants, No Bones Beach Club. Its tagline sums it up – just because it’s vegan doesn’t mean it sucks – and owner MacKenzie DeVito is on a mission to prove just that.

The beach shack style establishment serves a range of dishes, from light bites and crisp salads to full-flavoured tacos and bagels, all best washed down with one of their signature cocktails. No Bones Beach Club is also committed to animal welfare and donates a portion of sales to local animal charities every month. 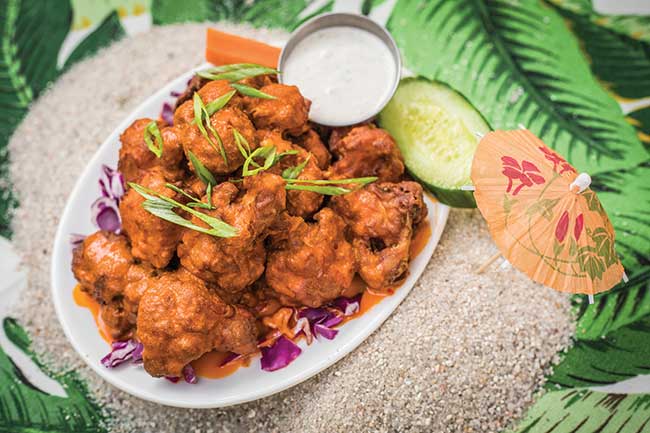 Vegan Haven is a 100% vegan supermarket owned by Pigs Peace Sanctuary, a rescue centre for pigs one hour north of Seattle. There is every type of product imaginable available, including plant-based proteins, dairy replacements, ‘seafood’, desserts and ready meals. 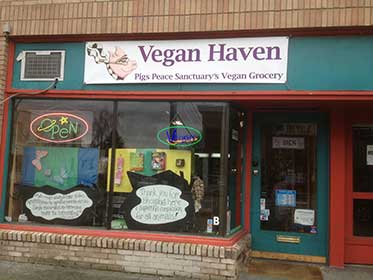 Situated in the Capitol Hill neighborhood, Plum Bistro is renowned by locals for its innovative and delicious cuisine.

Overseen by chef and owner Makini Howell, dishes are created with artistic finesse – notable items on the menu include BBQ glazed plant loaf and handmade beetroot and ricotta ravioli. You can tuck into a sandwich and freshly prepared juice, while there’s also plant-based ice cream. 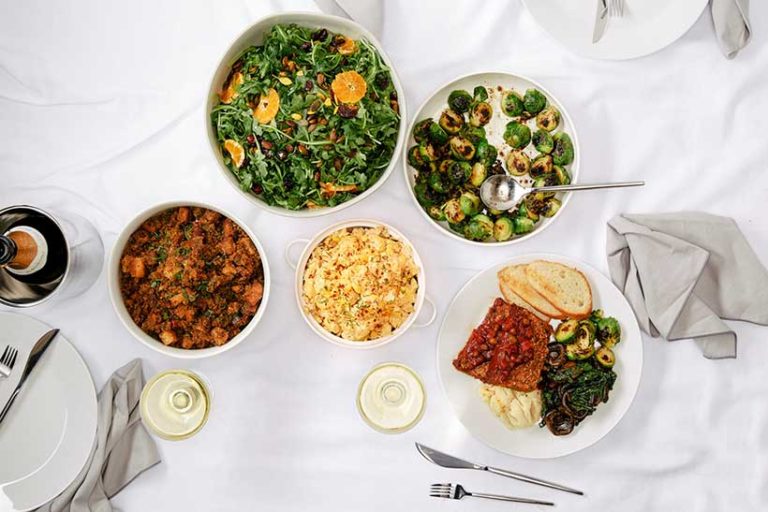 One of the oldest farmers markets in the USA, Pike Place Market has been serving Seattleites since 1907. There are more than 500 shops, vendors, restaurants and bars, providing everything from fresh vegetables and aromatic coffees to homemade gifts and local art. It’s also home to the original Starbucks, opened in 1971. pikeplacemarket.org 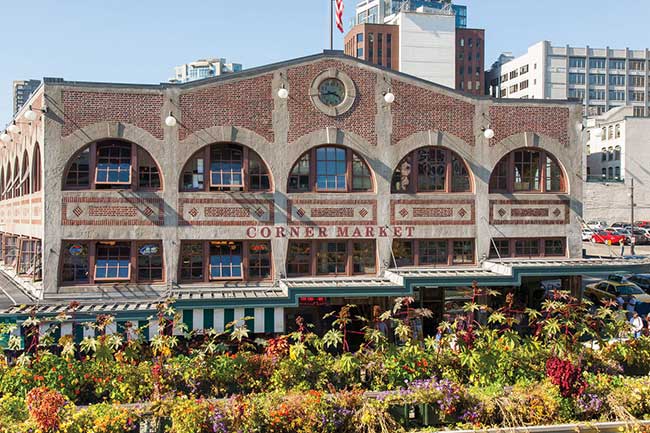 Standing at 605 feet tall, the Space Needle is an iconic landmark in Seattle’s skyline. Opened in 1962 for the Century 21 Exposition world fair, the tower was designed to symbolise humanity’s Space Age aspirations. It recently underwent a refurbishment and one of its highlights is The Loupe, the world’s first and only rotating glass floor. www.spaceneedle.com 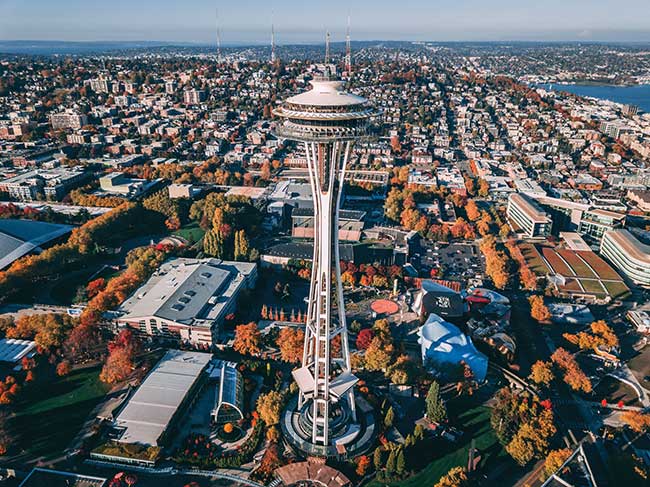 The centrepiece is the Glasshouse, a conservatorystyle building with a 100-foot sculpture suspended inside in hues of orange, red and yellow. www.chihulygardenandglass.com 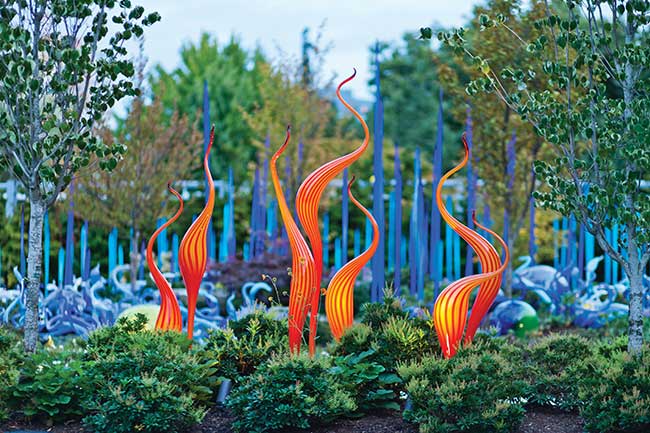 Music, science fiction and popular culture all come together at Seattle’s Museum of Pop Culture, or MOPOP as it’s known to the locals. Designed by Frank Gehry, the architecture of the building aims to replicate a smashed guitar, in homage to the legendary musicians that hail from the city.

Ongoing exhibitions include Pearl Jam: Home and Away – examining the journey of rock band Pearl Jam since they formed in the city in 1990 – and Fantasy: Worlds of Myth and Magic – looking at fantastical books and movies. From spring until 4 January 2020, visitors can catch Prince from Minneapolis, an exhibition on Prince. www.mopop.org 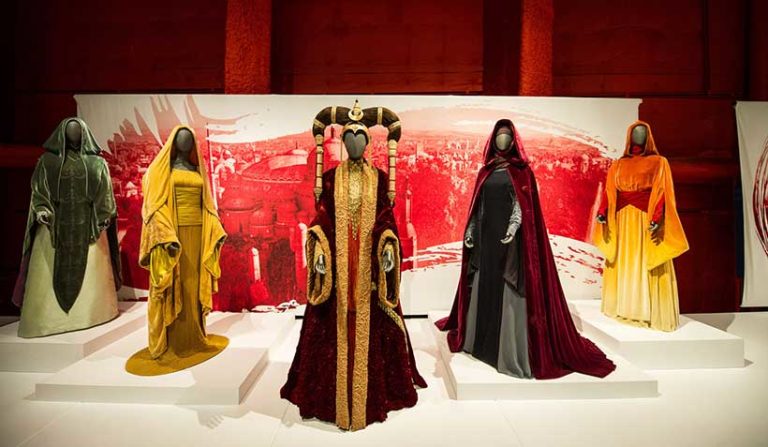 It’s a great place to spend a leisurely afternoon, whether that’s grabbing a bite to eat or discovering the area’s hidden gems, like Waterfall Garden Park. On the first Thursday of the month, head to Pioneer Square for a free art walking tour. www.pioneersquare.org 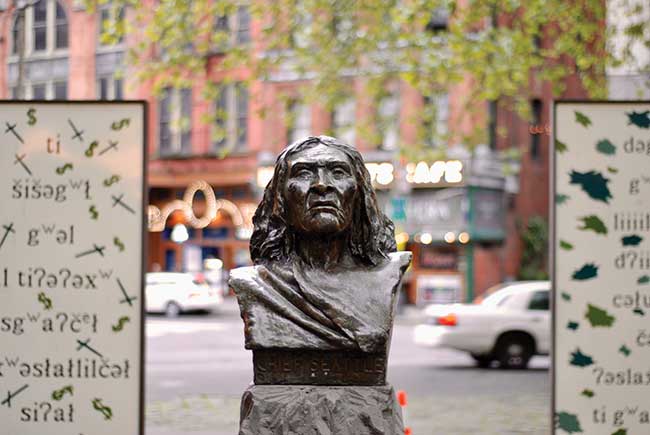 There’s loads to see and do in the park, including hiking and camping. There’s also a range of lodges available to stay in for those looking for a blissful and comfortable getaway. www.olympicnationalparks.com 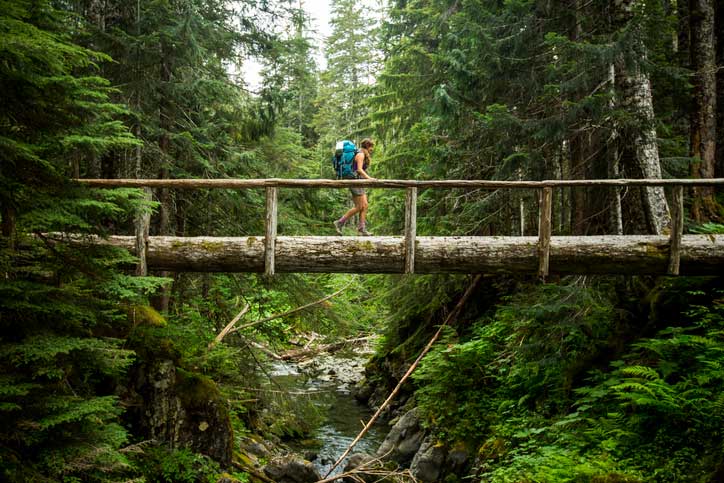 If you’re keen to book various tours in advance, such as the Hop-On, Hop-Off bus, take a look at Isango!. Or alternative you can buy a CityPASS that gives you access to the Space Needle, the aquarium, the Museum of Pop Culture, and more at your own pace packaged together for a much cheaper rate.

The State Hotel – 1501 2nd Avenue, Seattle, WA 98101. Opened in March this year, The State Hotel is a new boutique property just a stone’s throw away from Pike Place Market. The rooftop deck offers spectacular views of the city. www.statehotel.com

Book The State Hotel at Booking.com

The Sound Hotel – 2120 4th Avenue, Seattle, WA 98121. Having celebrated its grand opening in February, this is the latest addition to Seattle’s Belltown neighbourhood. The hotel is contemporary in design and luxurious in comfort. thesoundhotelseattle.com

Book The Sound Hotel at Booking.com

Kimpton Palladian Hotel – 2000 2nd Avenue, Seattle, WA 98121. A landmark property in Seattle, the hotel still retains the grandeur and elegance since it first opened in 1910 as the Calhoun Hotel. Its location in Belltown is walking distance from Pike Place Market and the waterfront. www.palladianhotel.com

The Maxwell Hotel – 300 Roy Street, Seattle, WA 98109. The Maxwell Hotel is funky, fun and fresh. Visitors are welcomed into a brightly coloured lobby before checking into artistically-designed rooms. www.staypineapple.com/the-maxwell-hotel-seattle-wa

Book The Maxwell Hotel with the Booking.com

Graduate Seattle – 4507 Brooklyn Avenue NE, Seattle, WA 98105. This boutique property is in the city’s university district, making it a hot hangout to relax at with a coffee. On the top floor is the Mountaineering Club, a bar and restaurant with panoramic city views. www.graduatehotels.com/seattle

Book the Graduate Seattle at Booking.com

Getting there: Norwegian Air, Virgin Atlantic and British Airways all fly direct to Seattle from London. For more information visit the website www.visitseattle.org