A culinary journey through Asia: The ultimate vegan travel itinerary for 2017

Are you ready to pack your bags and go on an adventure of a lifetime? Join Adriana Pope from Nomad Vegan as she takes us through a culinary journey through some of Asia’s hottest vegan eateries… 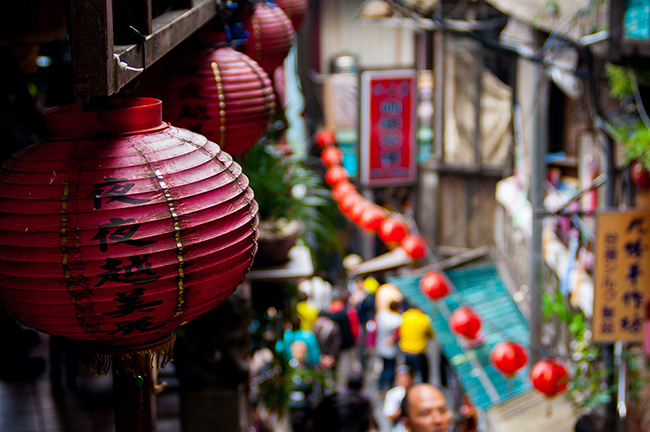 Southeast Asia is one of the most vegan-friendly destinations in the whole world. I’ve created the ultimate vegan travel itinerary that is guaranteed to inspire wanderlust.

From ancient temples and lush green rice paddies to exotic fruits and tantalising dishes, Asia is a wonderland of mystical experiences, sights, sounds, and flavours.

Luckily for you, eating vegan in Southeast Asia is not as difficult as it may seem. Due to the predomination of Buddhist culture, vegetarianism is widely practiced amongst many Asian countries.

The abundance of tofu, fresh vegetables, and the use of rice noodles makes finding vegan option incredibly easy.

In this article, I’ll cover the top vegan travel destinations in Asia and highlight the key factors that makes these cities stand out. I’ll also include a bucket list of the top-ranking vegan restaurants that serve up the most delicious food for each city.

Out of all the cities in Thailand, Chiang Mai is inarguably the most vegan-friendly city, hands down. With a plethora of vegan, organic and even raw restaurants to choose from, you’ll be spoilt for choice when it comes to dining options.

Located in Northern Thailand and in close proximity to the Burmese, Chinese, and Laos borders, Chiang Mai’s unique culinary specialities are infused with the influence of the surrounding cultures. 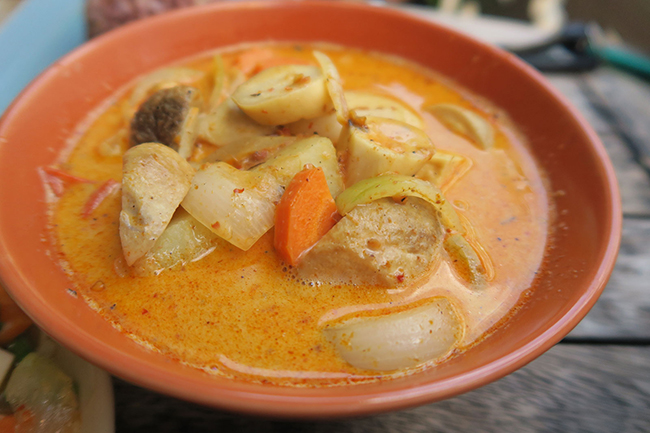 Albeit small in size, Chiang Mai contains more than 200 mesmerising temples and is surrounded by an impressive ancient city wall. This mellow city boasts dozens of outdoor markets, hoards of healthy street food stalls, and a growing number of trendy coffee shops.

One quick stroll through the lantern-lit streets of this charming town and you’ll quickly realise why Chiang Mai is the ultimate vegan vacation spot just waiting to be explored by peace-seeking travellers. 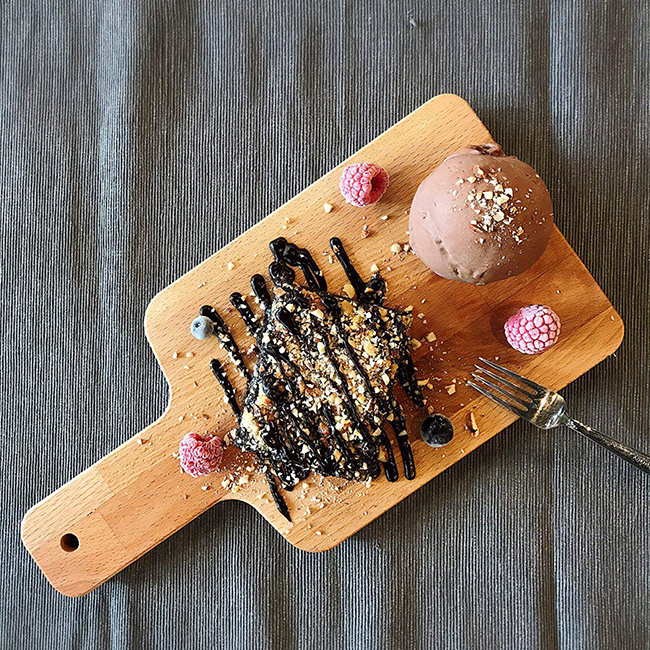 Vietnam. The word itself invokes imagery of palm-leaf conical hats, monks in orange frocks collecting alms, and a river of motorbikes streaming through narrow streets with horns blaring.

Ho Chi Minh city may no longer be the capital of Vietnam, but this splendid city certainly never lost it’s charm!

From it’s jaw-dropping French colonial architecture to its surprisingly complex cuisine, Ho Chi Minh city offers a little bit of everything for both the history seeker and vegan foodie enthusiast.

Recently recognised by PETA as one of Asia’s top ten most vegan-friendly cities, Ho Chi Minh city is fast becoming one of the most beloved travel destinations for 2017.

Ho Chi Minh City, which is still referred to by the locals as Saigon, offers vegans respite. With a large population practicing Buddhism, Saigon is filled with an extensive amount of vegan-friendly restaurants.

From hand-made spring rolls filled with fresh Vietnamese herbs and tofu to colossal steaming hot pots filled with an unprecedented amount of mushrooms and local greens, the cities exciting culinary flavours are a force to be reckoned with. 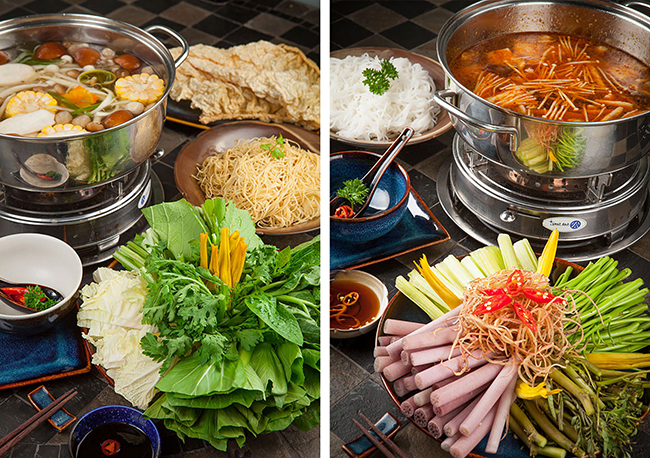 The faint sound of bells chiming, the smell of incense drifting in the air, monkeys swinging from branches, and the display of brightly coloured flowers laying in banana leaf offerings – this is the wonderful and mystical world of Ubud, Bali. Ubud’s unabashed Balinese culture is gripping, enchanting, and downright hypnotising. Paradise on earth would be the most concise way to describe this miniature village that has grown to be one of the most vegan-friendly cities on earth.

It is easy to find vegan options in Ubud. Whether you’re looking for a great spot to be a digital nomad or you want to hunker down and practice yoga, Ubud’s relaxed vibes and lush nature make it a must-see destination in Southeast Asia. 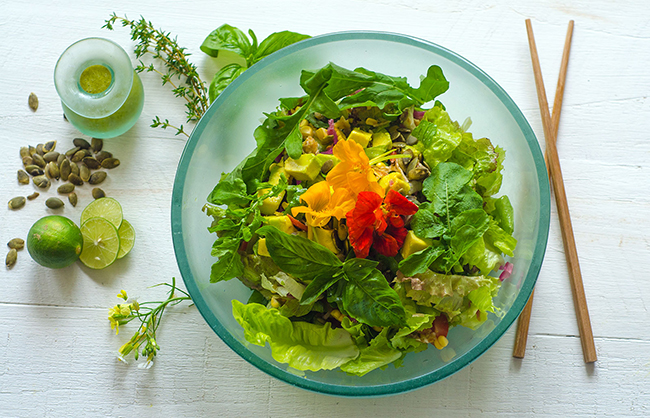 Straddling the Strait of Malacca, the picturesque island of Penang is the economic jewel of Malaysia. The centuries old Chinese-style storefronts littered with colourful lanterns swaying in the soft breeze, and quaint coffeeshops are enough to make you contemplate settling down forever in this charming little town. Tropical fruit farms, organic farmers markets, and a burgeoning number of vegan-friendly restaurants make Penang a suitable choice for traveling vegans.

Founded in 1786, the fetching downtown area of George Town is a melting pot of three diverse cultures which are Malay, Chinese, and Indian whom all live in a unique harmony. It fact, it’s not uncommon to see a Buddhist pagoda, a Muslim mosque, and a Hindu temple all situated on the same street. However, religious tolerance is not their only glowing quality. 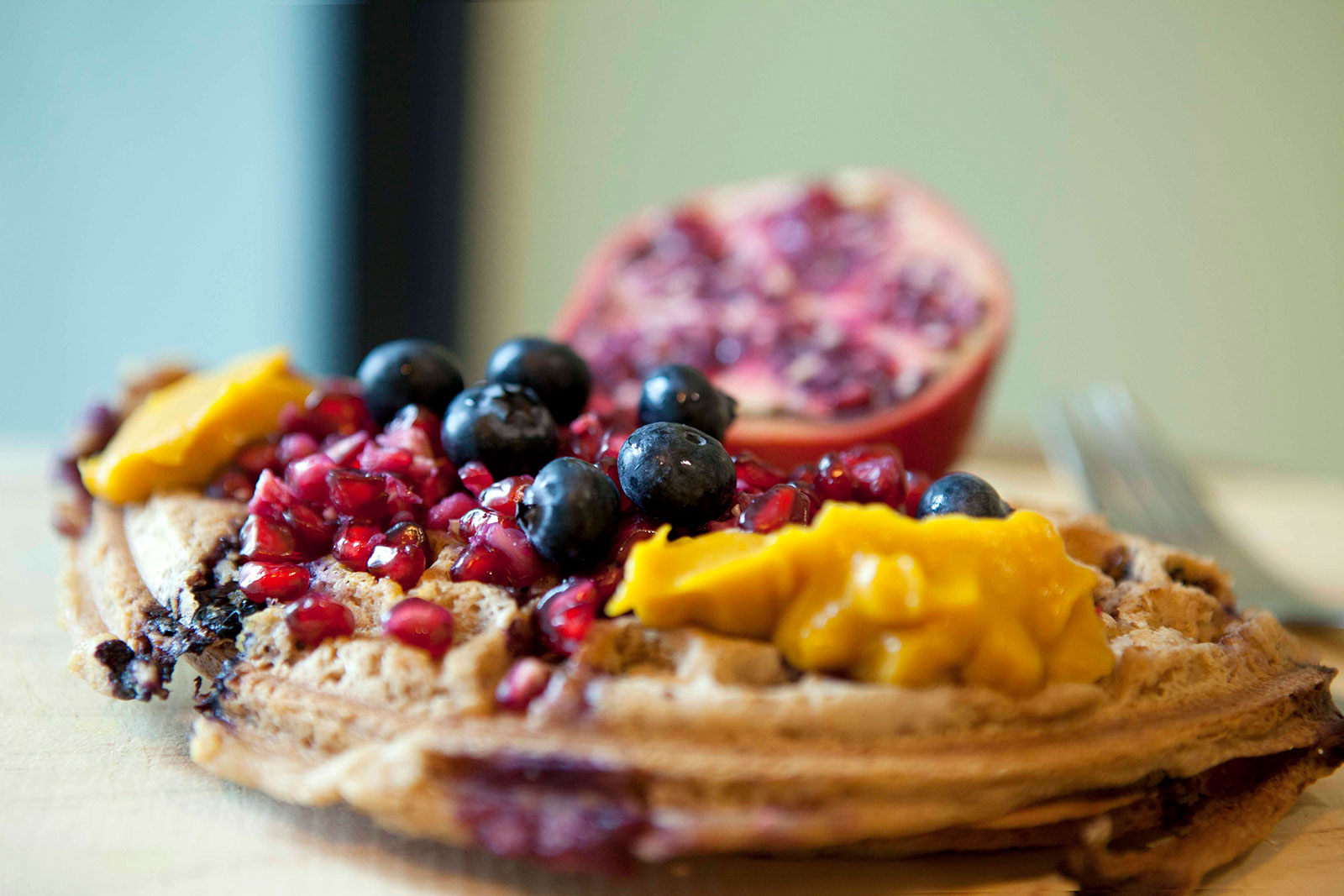 The distinct cuisine of Penang is a fusion of these varied cultures which results in dishes that are extraordinary delightful and truly unique to the island.  Plant-based restaurants are also extremely easy to find because both Hindu and Buddhist practices encourage a meat-free diet. 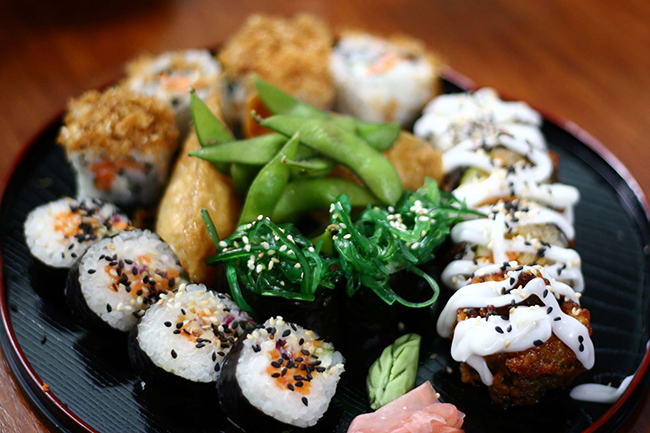 Taipei has officially become the number 1 most vegan-friendly cities in Asia. Trendy coffee shops, 24 hour bookstores, beautifully absurd fashion, seriously good vegan bakeries, and retro neighbourhoods are just a few examples of how cool Taipei really is. Get ready to go to a music festival, explore modern art museums and stuff your belly with tasty street food.  If you’re into bustling cities and amazing vegan food, Taipei is the right place for you!

With the up-tick in vegan-friendly restaurants, Taipei has permanently placed itself on the map as being a vegan paradise. You can even find artisanal vegan cheese by the plant-based company Moon Cheese. If that’s not enough, they even have their own vegan supermarket called iVegan Supermarket where you can find anything your little heart desires! If you’re craving authentic vegan Chinese food or you’re just a plain noodle fanatic, then Taipei is certainly calling your name. 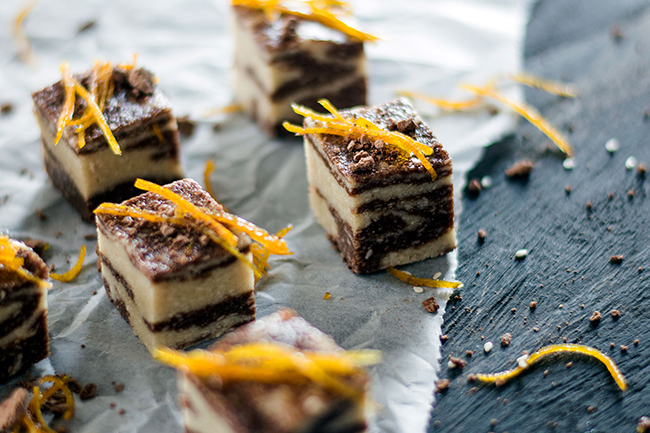 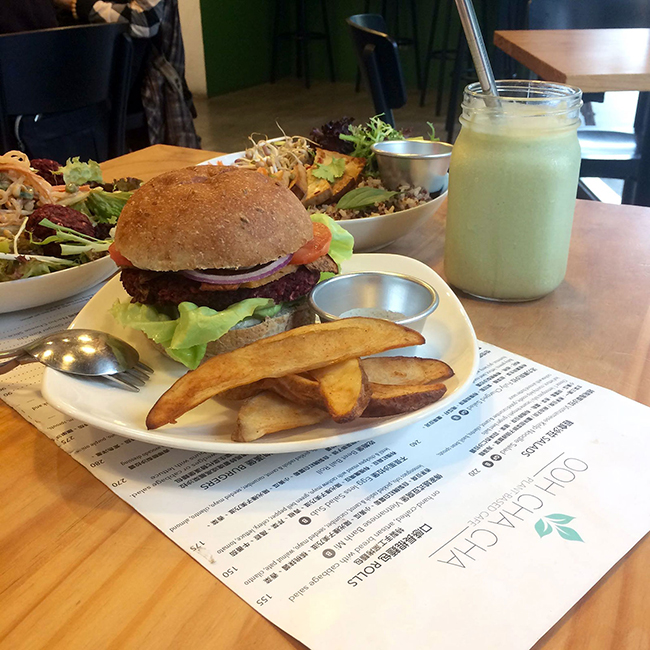 Unsurprisingly, Singapore (a.k.a. “The Lion City”) has been rated as the second most vegan-friendly city in all of Asia for 2017. Considering the ever growing presence of vegan restaurants popping up every day, it’s no wonder why this metropolitan city is one of the most loved cities in the world by plant-based foodies. What’s Singapore like, you ask. Singapore strikes a balance between cloud-towering modern architecture, awe-inspiring nature, and stunningly beautiful ancient pagodas.

Singaporean cuisine is prized as one of the best foodie destinations! It’s essentially a mash-up between Malay, Chinese, and Indian flavors. Besides delectable authentic Singaporean dishes, the Lion City also offers international cuisine in the form of vegan burger shops, farm-to-table kitchens, and dairy-free bakeries which are paving the way to make Singapore the vegan capital of the world. 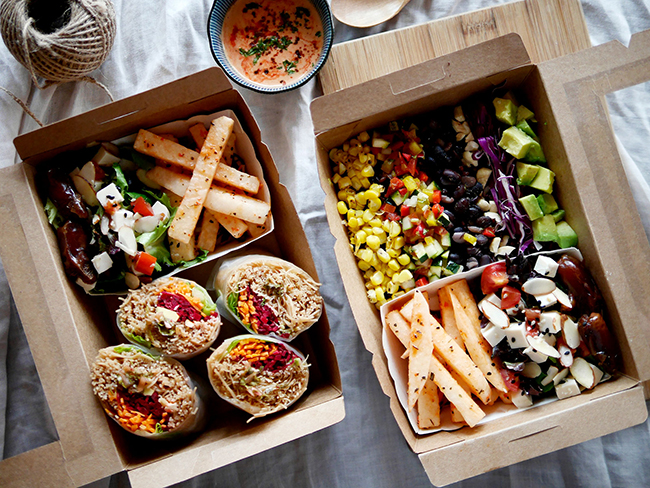 In Singapore, you can find everything you’re looking for as a vegan! Treat yourself to a vegan pedicure at the Paint Shoppe Nail Spa, shop for eco-conscious threads at The Little Green Dot Marketplace, pick up some organic groceries at the Real Food Grocer, eat a drool-worthy burger at VeganBurg, grab a vegan donut at the Well Dressed Salad Bar and take an ice cream to-go at Brownie Ice Cream. Basically, Singapore is vegan heaven on earth. 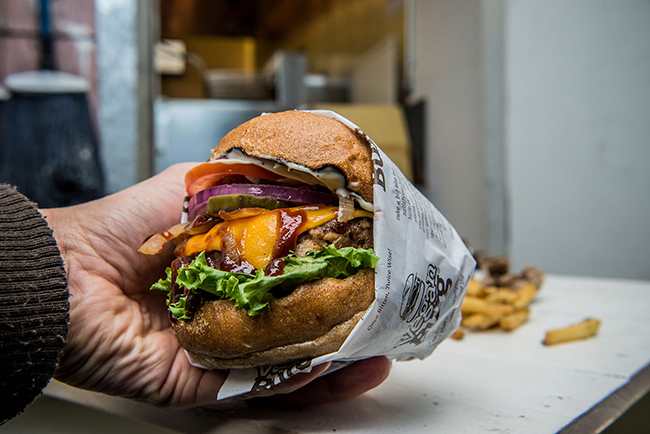 Traveling as a vegan doesn’t have to be difficult. The challenges that may arise actually provide opportunities for you to explore the city with a little more depth. If you need help finding vegan  restaurants, you can use a site such as Vegnomad which is the first worldwide vegan restaurant guide. You can also join vegan Facebook groups to see if there are any vegan potlucks happening or if anyone would like to meet up and show you around their city. Happy travels!

VegNomad is a worldwide directory of all vegan and vegan friendly restaurants. Their goal is to help people find vegan options nearby wherever they are in the world. They currently have over 30,000 listings and they are growing everyday. 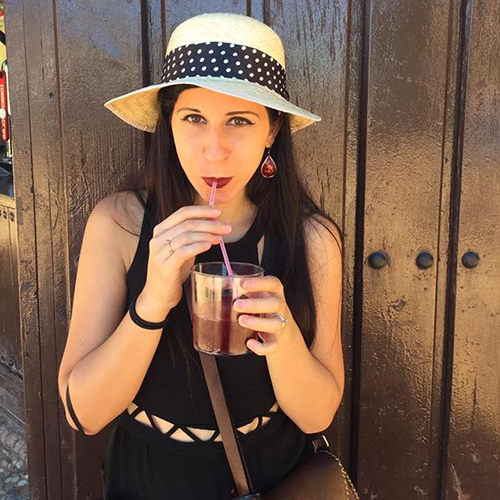 Adriana Pope is a co-founder of the world’s first vegan restaurant guide Nomad Vegan, which contains over thirty thousand vegan friendly listings. She has been traveling throughout Asia with her husband Nathan for almost two years in the search of the best vegan food. You can follow their travels on YouTube and see their latest photos on Instagram.