We meet Daniela Lais Inode from Vegan On The Go

From a challenging start to life as a vegan in Austria, Daniela now has it all on the go! 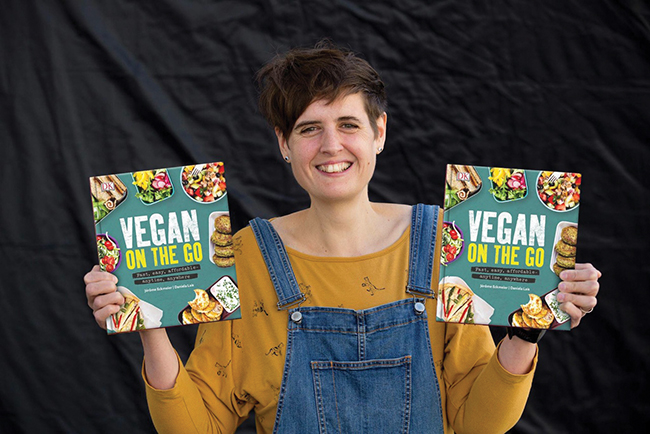 When did you decide to go vegan?

It was 15ish years ago. I was a vegetarian and decided from one day to the next, I want to go vegan. I thought by myself, being veggie is cool, but there is so much more to think about it and it’s not 100%. So I just did it. It was for ethical reasons, no animals should be harmed for my eating habits. It was the best decision in my life!

What was the vegan scene like in Austria at the time?

It didn’t exist. There was no vegan scene, no vegan food, no people who knew about the vegan lifestyle. It was rough and it was a hard time for me. I was not able to find plant-based milk at the supermarket, no vegan cheese of course, no tofu or seitan. Nothing. I started going to the organic market, asked for soy milk, but no plant-based yoghurt, for example. So I ordered huge amounts of soy yoghurt ahead, it was a 2-3 week wait until it was delivered to the organic store. I was also the only person in a very rural area. No vegetarians, no vegans. I was the weird person with a 100% plant-based diet and people didn’t understand why. I talked so much about the topic, I went to bookstores, asking for vegan books, ended up describing what veganism is about. No vegan books of course.

How is the scene in Portland, where you live now, different?

It’s a vegan wonderland. This is the best place on earth. We have everything here, a vegan mini mall, vegan donut stores, international vegan restaurants, vegan pizza places, vegan ice cream places, vegan food carts. I love this city, it’s where my heart is and it’s home for me. You can mostly choose from three to four plant-based milk options in coffee shops, the food is amazing. The best chefs and bakers are in Portland, I am surrounded by foodies and this is what I love. Vegan options everywhere you go. There is also a strong vegan community, people who are doing a great job with volunteering and helping people the vegan way, for example Food Not Bombs is a group of people cooking vegan food for people in the streets.

How did you learn how to cook?

I learned everything by myself. This was hard work. As there was nothing out there, no vegan food, so I kind of had to! I started trying and working on it. I’ve worked on tons of recipes, sometimes I was desperate when it didn’t work –that especially happened with cakes and I worked so hard. I made up recipe after recipe. This brought me later to the books. At the time I could never imagine that this would happen one day. I am a journalist, never had commercial kitchen training, it’s all about passion. Love what you do and work hard, then you can do everything!

What is the most challenging thing about vegan baking?

For me it was gluten-free vegan baking. Over the last two years I worked on lots of gluten-free, soy-free and vegan recipes. This combination was the most challenging thing. I have very high expectations in my work and in myself, so it has to be 100% delicious, then I am happy with it. I normally work for a long time on recipes, I do it again and again, until it’s perfect.

What are your favourite ingredients?

My favourite ingredients are organic and fair trade. I try to bake and cook everything organic, I think it’s the key for a better environment and a green planet. It’s also important for me to use fair trade ingredients. Especially with cocoa – don’t support child slavery. Vegan lifestyle means more to me than just caring about animals. It’s about humans too, fair payment, healthy people, good thinking, positive lifestyle. It’s a big, whole thing.

How did your new book Vegan On The Go come about?

We are super successful in the German speaking market, so my publisher DK decided to translate the book to English and for the US and UK market. Both are very interesting markets, as there is a huge ‘to-go’ culture in both countries – people want to cook fast but healthy meals. And this is what the book is about.

What’s your favourite recipe from the book?

Hard to say! We have 100+ recipes in the book and my favourite thing is that every recipe comes with a picture. This is so important, because you want to see what you cook and you are motivated to cook something if you have a picture of it. I would say my most favourite things are the pasta-fennel-banana salad, my cinnamon buns and the burgers and sandwiches.