From novice to ultra in one year, Tim Shieff talks to The Vegan Society’s Elena Orde about his physical and mental change to a better person… 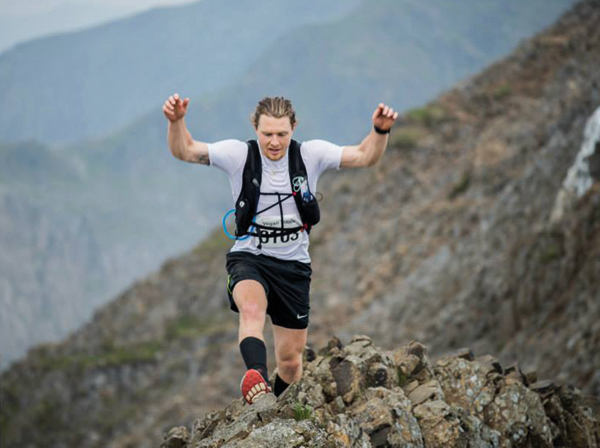 Tim ‘Livewire’ Shieff is a multi-skilled athlete; a World Champion freerunner and winner of the Ninja Warrior TV show. Until recently, running had just been a means to an end, a way for Tim to move between obstacles or gain momentum to vault a wall. But last year, all that changed.

Discovering a depth of unplumbed talent for distance running, Tim ended 2015 by completing a 100k ultramarathon, having hardly been able to manage a ten-minute jog 12 months earlier. He attributes much of this new-found endurance to his vegan lifestyle, something he is very passionate about.

Tim got into running in September 2014. “Before that, I could barely run a mile and I’d be knackered. Then I just got hooked on it,” he says. “I got the bug. Now I want to do it all the time.” I don’t have much difficulty believing this, as Tim is taking our phone interview as
an opportunity for a jog around the streets
of London.

Tim completed his first marathon in April last year, finishing in just over three hours. “I thought if I just went a bit slower, I could go quite a bit further,” he says. A month later this idea was tested, as ‘quite a bit further’ became two and a half times the distance. In May, he took part in the London to Brighton 100k challenge, a feat he filmed for his YouTube channel. Crossing the finish line on the dot of his 12-hour goal, he almost couldn’t believe it. “That’s mad! 12 hours exactly! That’s my 12-hour PB,” he said.

Speaking about this phenomenal challenge, Tim says, “I’ve never felt so overwhelmed as an adult. Nothing has ever made me feel this way, feel this sense of accomplishment. Maybe that’s because we’re born to run – it’s such a natural thing for us to do.” 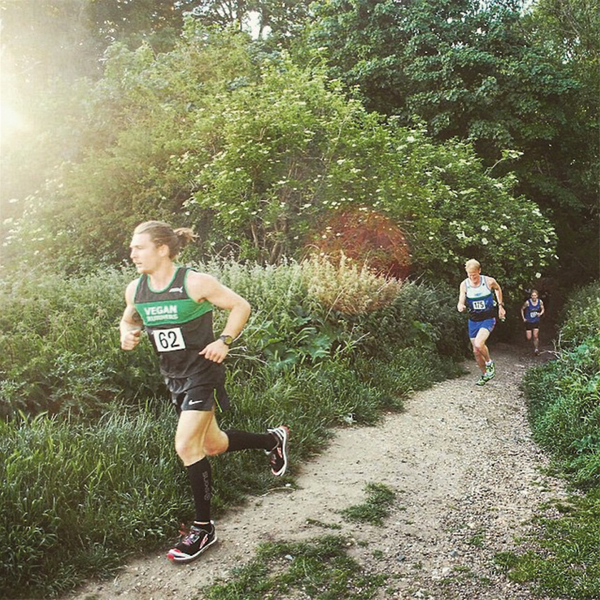 So what’s the secret behind going from novice to ultramarathon-runner in just a few months? “The vegan diet helped me to improve so quickly. When you train so frequently you get joint aches and ligament strains. I used to get sore knees and tendonitis. All of that went away as I began to eat a whole food, plant-based diet – it’s so anti-inflammatory, and your digestive system gets a break. Eating meat takes a lot more energy to digest, and so when you stop eating it you have all this spare energy that goes on healing your body, and building your body.”

Along with this diet has come a whole new way of thinking. “I don’t think I was an athlete until I became vegan. I used to be big, muscularly, but I was swollen – it wasn’t ‘healthy big’. Now I’m lean, sharp and my mind’s quick. That challenge of changing my diet made me, mentally, a lot tougher. If you can change your diet, you can do anything.”

On finishing his 100k race Tim says, “The human body can adapt so quickly if you’re passionate about something.” But where does this passion stem from? A large part of it is raising awareness for animal rights causes. “It’s such an injustice, the way we treat animals so hypocritically. Eating animal products is so deeply ingrained in our society, but at this point it’s a mistake. It doesn’t need to exist anymore, and people are certainly starting to understand that.”

Tim always champions the ‘Vegan Runners’ T-shirt when he competes, as a way of dispelling myths about vegans lacking nutrition. “Other athletes aren’t surprised anymore,” he says. “We’re reaching a tipping point. A lot of people are getting interested in vegan lifestyles. The next two or three years, they’re going to be very interesting.”

Get more advice and support about following a vegan diet at www.vegansociety.com