Karin Ridgers talks to Jake about his foray into veganism… 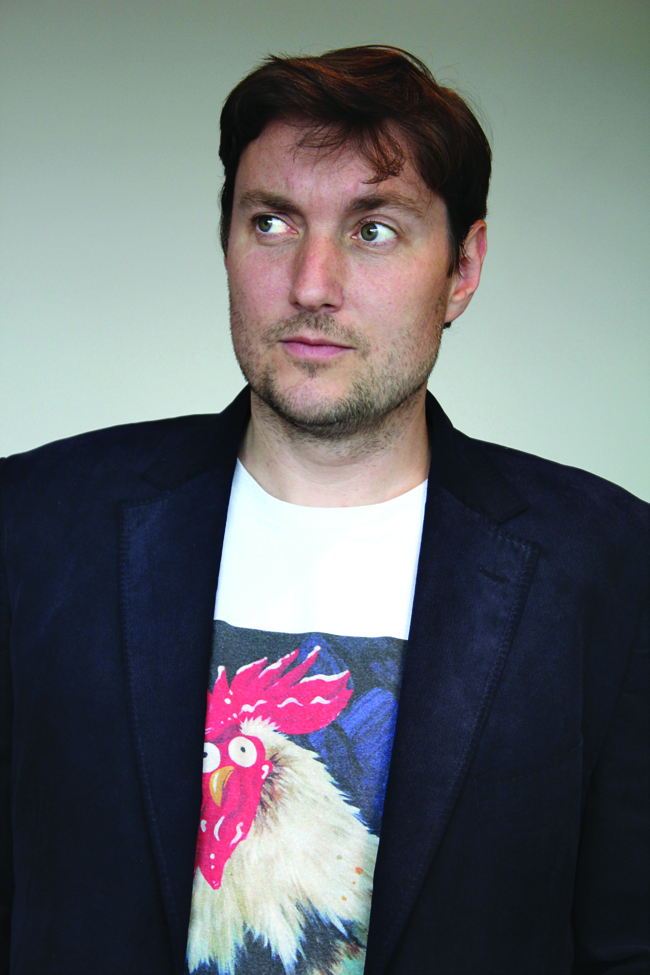 Jake is a writer, composer and comedian, with writing and performing credits including Never Mind the Buzzcocks, Charlie Brooker’s Weekly Wipe on BBC2, and 8 Out of 10 Cats Does Countdown.

As well as television, Jake spent three years working on the 6Music Breakfast Show, writing, performing and producing hourly songs and sketches. He also wrote and performed Pleased to Meet You for BBC Radio 4Extra, in which he played a little old lady called Dora Dale, who was pretty fruity.

His online clip ‘Radio 4 in 4 Minutes’ has attracted nearly 100,000 views, and, inexplicably, resulted in appearances on Feedback, Broadcasting House and the Now Show (his next appearance is on December 17th, if you’re around).

He’s a committed vegan of four years’ standing, and has reached a point where he feels soy milk no longer tastes like wet cardboard. Come and see him at the Vegfest UK too.

Hi Jake, as you know I am writing for Vegan Food & Living magazine and I also run www.veggievision.tv with some big plans for spreading the vegan word next year. I have been vegan for nearly 20 years since I realised what it was I was eating.

What about you? Why and when vegan – and did you go vegetarian first?

I went vegetarian at the age of 11 – my whole family decided. I remember having been upset at the idea of where meat came from for a long time, and was relieved when we decided to give it up. I turned vegan in 2011 – and have just celebrated my fourth anniversary.

I’m ashamed to say I didn’t manage to do it alone – it was my partner Kim who showed me the way. I think it often takes someone you respect to influence you enough to make the change.

I hear that a lot, especially in the early stages of going vegan – great to avoid the non-vegan foods that may be a temptation in the fridge, although after a little while they are no longer a temptation! I actually felt more confident and spiritually happier when I went vegan and others have told me they have more energy, feel fitter, even have better sex lives! What other benefits have you seen being vegan?

What you don’t realise before you give up dairy is how attuned your palate is to it. And once it’s adjusted to a vegan diet (it takes about 12 weeks, I think), you don’t ever want to go back.

I remember a few years ago Kim and I went to a restaurant in Leeds which had literally no vegan options. At all. So we ordered some vegetable side dishes. They arrived, we tasted them and they were swimming in butter. I think that being vegan teaches you to have more respect for where your food comes from and what’s gone into it – I really hate waste.

So we ate the food. I am not going to lie to you – they tasted amazing. But an hour later, there was this sour, rancid, cloying claggy taste my mouth and I realised that I had lived with that taste all my life – I just hadn’t realised. I think you just generally feel a lot cleaner and lighter inside.

The other thing is your brain’s sheer relief at no longer having to practise such extreme cognitive dissonance – reconciling a wish to look after animals and eschew violence with knowingly eating food which has caused death or suffering. It’s a really profound feeling. I’ll always be glad to have made the little jump into veganism for that.

So how does being vegan affect your comedy and writing career? Are you always catered for well at events? What’s the worst thing that has even been dished up for you?

Veganism is probably as close as I’ll get to having a religion – it’s a belief system and a set of values which affects your outlook on everything. And so it does inform my comedy.

The worst catering was on location, filming for Charlie Brooker’s Weekly Wipe one time.

I have to say, producers are consistently incredibly conscientious about making sure there’ll be food that’s ok for vegans, but we got to the cafeteria late, and I think I ended up with cold frozen chips. It was a bit dismal…

Can you tell us about that one defining moment when you knew you wanted to be a comedian?

Nope. Bye! Haha. No, but I grew up, listening to comedy, mainly.

My heroes were Spike Milligan and The Goon Show, Spike Jones and his City Slickers, basically anyone called Spike. Which happens to be the name of my little boy.

Steve Coogan. If you haven’t seen Saxondale, dig it out. It pulls off that incredibly rare feat of being sweet and touching and laugh out loud funny.

I loved Arrested Development, too. It was phenomenally good. I like the mad polemicism of Doug Stanhope and Bill Hicks as well. But then, look at something like Father Ted; how glorious. Amy Schumer is brilliant, too. And I miss Jon Stewart from The Daily Show. So say we all.

WHERE TO START? I know I’m supposed to say steamed quinoa with toasted pumpkin seeds and fresh tomato, although, actually, that’s starting to sound quite good, but a good veggie cheeseburger and chips, followed by chocolate brownie and ice cream. I mean, COME ON.

Not much beats a good vegan cheeseburger! In fact would you let us know what a typical day at Jake’s house would look like – tell us your plans for the day and what you eat – breakfast, lunch, snacks and dinner?

I get up with my little boy at about half past six (I cannot WAIT for his teenage years in that respect) and make his breakfast. His favourites are either a toast sandwich with Natex and cashew butter (I know, how middle class can you get) or, and he just asked for it one morning – fried gnocchi.

I’d made it for him a few times and he decided it was breakfast food. And actually, it’s a great start to the day. Shallow fry gnocchi on a medium-high heat until it’s crispy and golden, then add garlic powder, smoked paprika and nutritional yeast flakes. Toss them about a bit, then try to distract your child while it cools.

For lunch we have something simple as we’re invariably juggling work or childcare, so it’ll be snacky stuff like Taifun tofu, salad stuff, bread, hummus, whatever’s knocking about.

For dinner, Spike will have sausages (Linda McCartney usually) with some vegetables, or rice. He’s getting into cooking and loves making rice with some vegetables in. Or maybe some satay rice noodles. There are few things so gratifying as watching your child shovelling food you’ve made into his mouth.

At the moment we don’t cook much grown-up stuff, but end up eating what he has. We use a lot of chilli sauce on our stuff.

If we were going to pop round yours for dinner and you really wanted to impress us with gorgeous vegan cuisine, what would you make for us Jake?

I make a mean tofish and chips. I slice tofu in half and fill it with a herb paste and chopped capers, which gives it a nice tartare saucy flavour. Then I tie it together with a spring onion and dip it in a seasoned and spiced beer batter. Then I’d hit you with a cocobanoffee pie. Bang.

What’s next for you career wise?

Morrison’s up the road might have some bin work going. I don’t know. I never know. That’s part of the joy of the job. I love never knowing what’s coming next. But there’s a series on Radio 4 I’m part of called ‘Would You Eat An Alien?’ and it’s a fantastic programme, looking at the ethics of eating animals. Episode one is already available, and it’s first broadcast on 9th December.

Is there something we should have asked you and didn’t?

Anyone wistfully wondering about becoming vegan should just do it. It’s really easy now. It’ll feel hard for a few weeks, but it gets easier and funner every day. And I promise it’ll be the best decision you’ll ever, ever make.

So finally… What do you wish was vegan and isn’t yet?

Fish sauce. Like nasty, pungent, retch-inducing anchovy pungent stuff. Nothing else, really. There are so many amazing substitutes for cheese, milk, chocolate and meat. I just tried the Coffee Chocolate Truffle chocolate bar by Considerit and it’s… It’s important. God. It’s so good.

I do wish all of Nigella’s recipes were vegan. But she is definitely on the bus with us now. Have you noticed?