In the kitchen with… extreme fitness guru Ross Edgley

An extreme fitness guru, new vegan, and a sports scientist, Ross Edgley is always on the lookout for new ways to push himself to the limits. 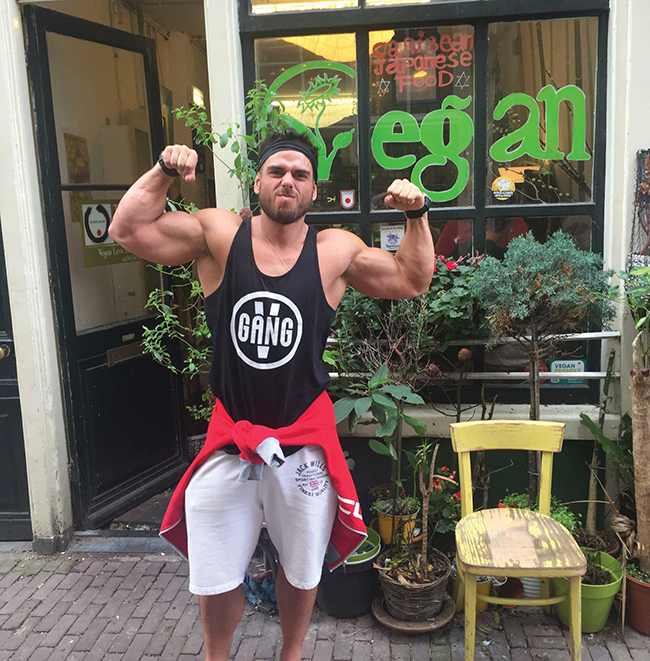 When did you first become involved in the fitness industry?

The truth is I’ve been training since I could walk. My dad is a tennis coach, my mum a sprinter, and my grandad was a great marathon runner. So sport and basic calisthenics have been part of my life (and family) for as long as I can remember. But I started to really embrace strength and conditioning properly at age 14. This is because I was playing water polo for the Great Britain junior squad at the time when I got a call up for the senior squad.

For those who don’t know, water polo is quite a physical, aggressive sport. Whilst I was a strong and physically capable 14-year-old, playing at senior level was a whole other level. I don’t mind admitting I basically got bullied in the pool during my first year at senior level by guys much stronger and bigger than myself. I remember one match in particular – it was against the Maltese national side and I took an absolute beating off this bear-like man with a giant beard and vice-like grip. We got into a fight and he held me under the water for what seemed like an eternity. At the point of passing out I couldn’t do anything other than take a bite out of his calf (not proud of it but equally didn’t want to end up on the bottom of the pool). My coach and I realised I needed to refine my training if I was to have any longevity in the sport.

Long story short, we did. I studied sports science at Loughborough University’s School of Sport and Exercise Science. And years later I was three (lean, functional) stone heavier and no longer having to ‘bite’ my way out of fights with guys much bigger than myself.

Why did you decide to go vegan?

There was one study that always resonated with me. In 2010, research published in the American College of Sports Medicine stated that plant-based “diets high in unrefined plant foods are associated with beneficial effects on overall health, lifespan, immune function and cardiovascular health,” but added: “Whether a vegetarian or vegan diet is beneficial for athletic performance has not yet been defined.” It made intuitive sense that it would because of the nutrient-dense nature of a vegan diet, which is why I’ve been exploring it ever since. Mainly competing as a vegan, I decided the time was right to go vegan, especially in the lead-up to my sports-based charity event. 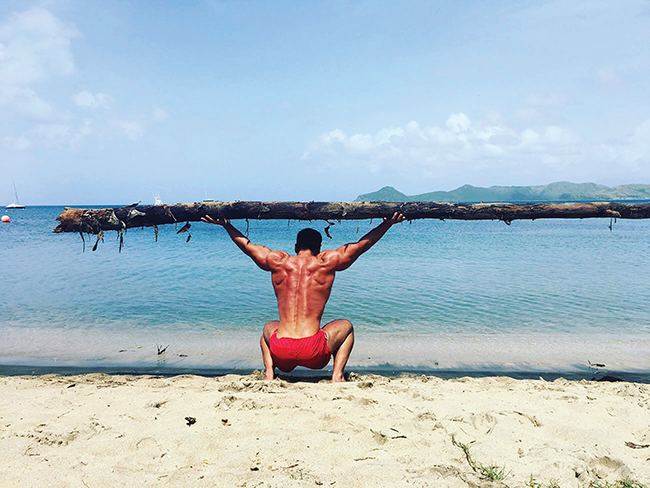 What were the biggest challenges?

I thought getting enough quality protein in my diet to recover from training would be an issue, but I’m in a very fortunate position being part of the founding team at THE PROTEIN WORKS™, which means I have a sports lab and protein bakery at my disposal. Since changing from whey protein to vegan proteins like hemp, pea and soy, I can honestly say I prefer the taste of vegan proteins. They taste more natural and are slightly denser in texture and when sweetened with stevia and vanilla extract they taste amazing.

Are you an enthusiastic cook?

I love my food and am learning to be better in the kitchen. But my skills pale in comparison to family members of mine. So since I’m lucky enough to have so many great cooks in my family (most vegetarian and vegan), I take the ‘back seat’ in the kitchen and adopt the role of chief taster. But I do have some cheeky recipes up my sleeve.

Is there anything you miss?

I think if I wasn’t from a family of vegan and vegetarian culinary geniuses I might struggle. But the reality is I am spoiled with vegan desserts, amazing curries and the best vegan muffins you will ever try.

Are people generally surprised to find out you’re vegan in the industry you work in?

I think attitudes are thankfully changing. Generally speaking we’ve become conflicted with our food. For many people food is black and white. You’re either vegan or you’re not. You’re either low carb or high carb. You’re either paleo or not. The list goes on. Basically, when it comes to our nutrition, we’re encouraged to adopt ‘polarised thinking’, which is a fallacy of thinking that our food is either black or white, good or bad, all or nothing. 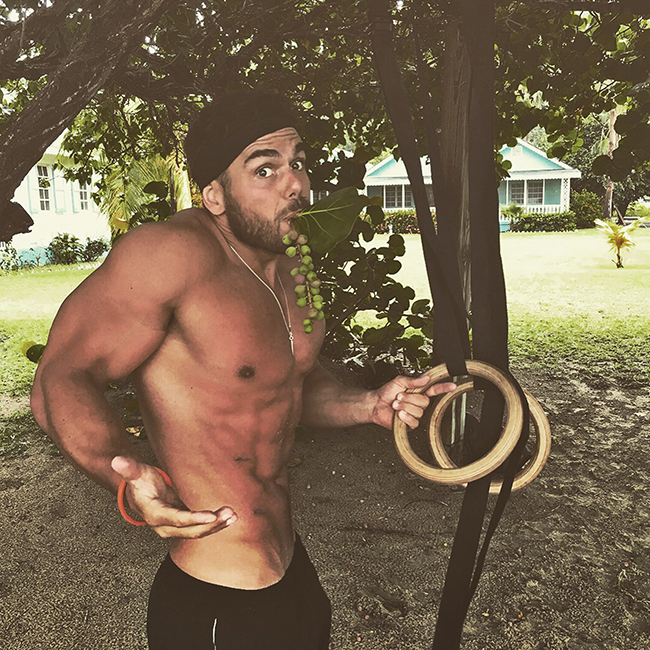 How do you prepare for an event like the World’s Strongest Marathon?

With something as extreme as this it was just about subjecting the body to hours and hours of training all fuelled on a lot of quality calories. Too often people will use an event like this to ‘binge’ on calorie-dense foods with no emphasis on nutrient density, yet veganism by its very nature floods the body with vitamins, minerals, phytochemicals and many micronutrients that are too often overlooked. What this meant is I met my calorie/energy needs during training and on the day, but at the same time was able to keep the immune system healthy and strong so I didn’t burn out.

What are your favourite vegan dishes to prepare for non vegans?

This has to be my vegan protein muffins. When straight out the oven they taste amazing!

Can sweet treats still be a part of your diet?

Absolutely. This is one of the biggest misconceptions about vegan diets. People think it’s salads and bland vegetables, but the reality is very different. Vegan friends of mine have a profound appreciation for food. An appreciation that anyone can learn from.

What three things in your kitchen could you not live without?

Oh that’s easy. Nut butters – in the form of cashew butter, peanut butter and almond butter, in that order! To fuel the volume of training I’m doing (sometimes requiring 10,000 calories a day) I live on this and now have my own range sold on THE PROTEIN WORKS™. 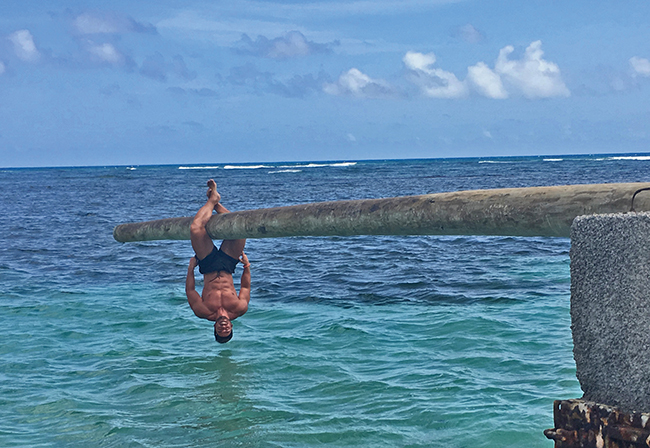 What led you to create your own range of nut butters and vegan proteins?

There is now such a demand for all things vegan. More and more people are opening their eyes to the possibilities and of course  it seemed a great way to ensure I had easy access to enough quality protein for my diet.

What’s the most extreme thing you’ve ever done?

This year has been pretty hectic. It started with the World’s Strongest Marathon (running 26.2 miles pulling a 1.4 tonne car). Then I climbed a rope (repeatedly) until I climbed the height of Everest (8,848m) and then ran 1,000 miles barefoot in a month. But I think the most extreme is still to come. This month I announced on social media that on the 12 November I will enter the crystal blue waters of the Caribbean and attempt to complete their annual triathlon (1.5km swim, 40km bike ride and 10km run) whilst carrying a 100-pound tree. Not just because of the weight, but the awkward nature of the tree, this is going to be hard and maybe my most extreme.

What’s next for you?

After the tree-athlon I promised I would be done for the year. But that may have just changed! The Teenage Cancer Trust rung me and asked if I would run a marathon carrying a Christmas tree to raise money for one of their wards. Of course I’ve said yes. So when I get back from the Caribbean, that will be next on the agenda, followed by a crazy 2017 that will make this year look like a warm up.