In the kitchen with chef Gaz Oakley of Avant-Garde Vegan

Sally FitzGerald talks to the author of Vegan 100, Gaz Oakley, about his vegan journey… 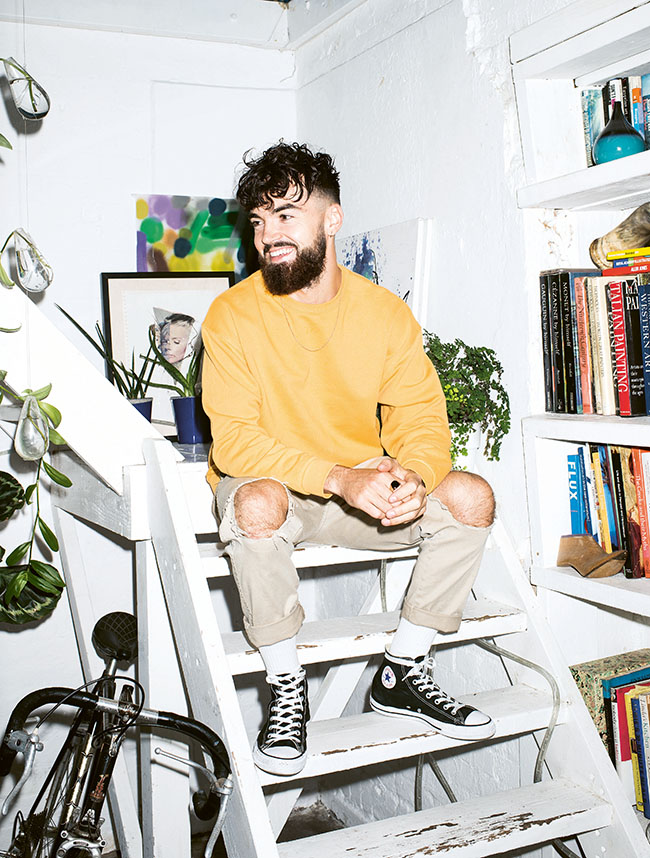 How did your passion for cooking first begin?

My dad cooked fresh meals for my family every night at home, and I just thought it was the thing to do. As soon as I was tall enough to be able to stand above the kitchen surface, I started helping out my dad. He taught me a few bits and bobs. When I was 14 I took catering at GCSE and that was the first moment I decided I wanted to be a chef. At 15 I had a week’s work experience at a hotel in Cardiff and then as soon as I could leave school I went full time and worked around some of Cardiff’s best restaurants for a few years. Even though I was so young they didn’t take it lightly on me, I was still working those 80 hour weeks and I had to drop out of it. I got involved in a completely different career, but as soon as I became vegan three years ago my passion for cooking came back to life and I am where I am now.

How different did you find cooking vegan food?

I basically had to learn how to cook again, but I never forgot the professional skills, so I still use the same techniques, I just had to learn new ways. I’d never used something like wheat gluten before, so I had to think of ways to use that and adapt.

Wheat gluten took me a few trials – if you don’t knead it enough it’s spongy, if you need it too much it’s tough, so it took a lot of testing, but now I have a base recipe and I can just tinker the flavouring in the wet mix to make different things. I love working with it.

How would you describe your cookery style?

I guess I’d use my favourite term – ‘veganising’. I love veganising nostalgic dishes and classic tastes. Not many of us were born vegan unfortunately, so I like to recreate those comforting foods with nostalgic tastes, only using plant-based ingredients. I also like to add a bit of flair, because
I like plating up and I love making things look beautiful. 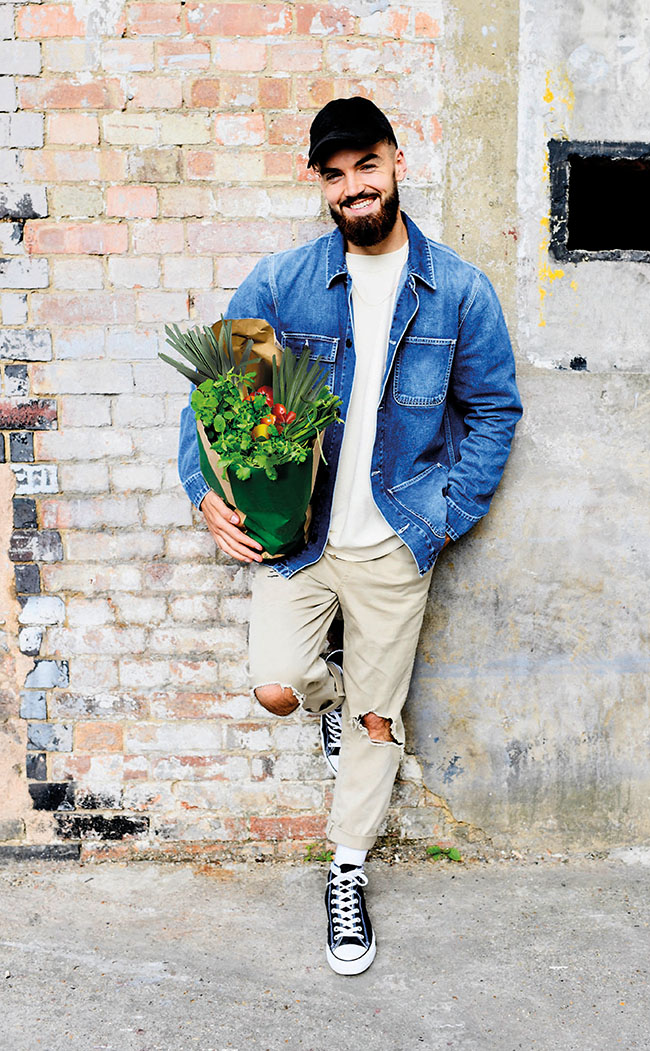 When and why did you decide to set up your YouTube channel?

It came about because my Instagram channel was about six months old and had gone from strength to strength just from uploading pictures of my recipes. So I thought the next step was to go over to YouTube. I only had a little bit of on-screen experience – when I was 14 I actually went on Britain’s Best Dish, a TV programme. I don’t know where I got the confidence from back then.

As soon as I stepped in front of the camera for my YouTube channel I was so nervous. The first few videos you can tell how nervous I was, a bit shy and a bit stiff, but I now love YouTube, it’s my main platform. In 13 months I’m coming up to 350,000 subscribers, which I can’t believe, it’s beyond my wildest dreams. I’m so grateful to everyone following me.

What do you wish you’d known when you first set up your YouTube channel?

I’ve learnt a lot each time I filmed and watched the video back. I now know how I need to address my audience. Going back a few seasons, I was cooking more like I would if I was cooking at home. I’d leave jars unopened, put a tin that I’d used on the surface behind me, but now I know you have to get rid of that straight away, keep tidy. Keep the audience well informed with what you’re doing. Smile – that’s a major one because at first I wasn’t smiling. I’m just happy that I haven’t tried to put on any personae. I’m just myself and I’m really happy with how they’re going these days.

I had an email from my now agent when I had 12,000 subscribers on my YouTube channel and she obviously saw something in me, really believed in me and set me up with some publishers that she knew. I had a few meetings and ended up signing the contract with Quadrille Publishing. They really supported me throughout the whole process of making the book and I’m so proud of it! 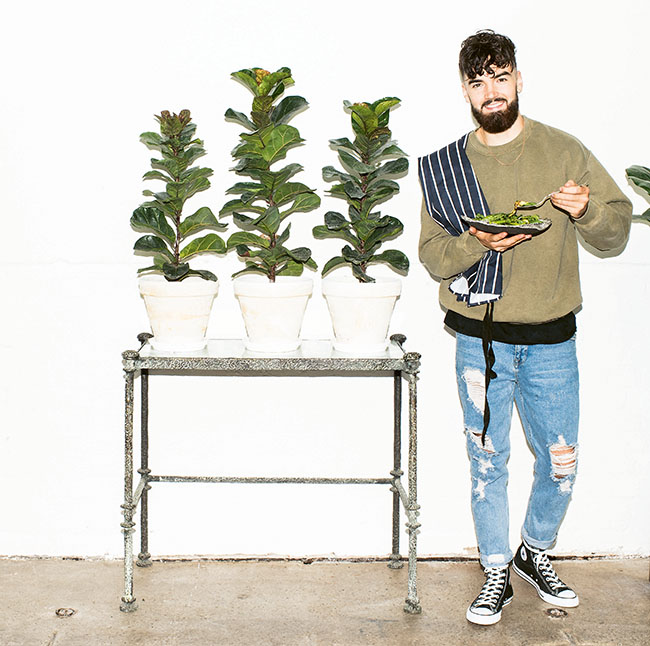 How did you decide which recipes to include?

I’m excited already to do another book and show off more of my recipes, because I’m learning so quickly about what I can do and what I can get from vegan ingredients. I’m learning every day and I don’t think any chef stops learning. I’d love to keep putting out more books.

Many of my followers are gluten-free, so I like to show people how to make tasty gluten-free recipes. Maybe one day I could do a vegan gluten-free cookbook, because it’s not as hard as people think.

What would you say was the USP of this book?

It’s classic, nostalgic flavours, packed full of comfort food and there’s something for everyone. That’s my punchline. It’s the book I really wish I’d had just as I went vegan. I’m happy that I learnt them really quickly, and that I can now share them with people that are maybe just going vegan and these recipes will hopefully help them.

And what’s your favourite recipe in the book?

A tough question. One favourite is the sriracha meatballs – that’s my message to people who say tofu is bland and boring. It can be, but when you get those amazing flavours involved, make ‘meatballs’ and serve it with grilled vegetables, it’s so tasty. And sriracha – I don’t think there’s a vegan who doesn’t like it – it’s so tasty.

What are your top vegan cooking tips?

Make sure you have a store cupboard full of a good mix of dried herbs and spices, including salt and pepper, because that’s how you get a good base of flavour into your dishes. You can instantly transform recipes that way and stop anything being bland.

Invest in some good equipment. A blender comes into play in a lot of my recipes and I recommend a powerful one – I use a Ninja Kitchen, if anyone wants a recommendation. And a sharp set of knives, but be very careful! Some of my recipes can take some time and they take even longer if you’ve got a blunt knife. Finally, check out my YouTube channel, because if you need additional tips they’re there, and there is a good selection of recipes for everyone to try.

What’s next for you?

I’m going to get back to YouTube to film a new season of recipe videos. I want to push the boat out and keep getting more and more adventurous dishes on the channel. My most recent series was quite adventurous – I made things like ‘scallops and bacon’, I made vegan ribs, and I want to keep exciting people with my cooking. And I want to promote veganism to as many people as possible and save as many animals as possible, that’s the reason I do all this. 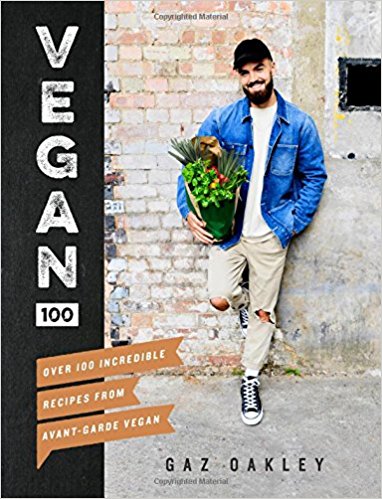