On the morning of August 12th 2012, I woke up and felt physically sick. I’d woken up like this every day for over a year. But, this morning it was blood. I remember my heart sinking. When I was sick for the third time and it was still blood, I knew something was seriously wrong. I’d been at a party the night before and drank heavily. This was something I’d done every day and night for months. I made my excuses and went home to bed.

When I woke a couple of hours later I thought the sickness had passed, suddenly I was violently sick again and it was more blood than before. My partner took me to hospital where I continued being sick. I was rushed into a room with a large amount of medical staff around me. The last thing I remember was someone saying I’d lost a litre of blood just in the waiting room.

When I woke hours later it was all a blur. I was told my liver was so badly damaged that seven varices (veins) in my oesophagus had burst open due to the pressure of my liver trying to filter the blood unsuccessfully. They had stopped the bleeding, but it wasn’t good news. I was still high risk as my liver was shutting down and more varices could rupture. I’d had a blood transfusion and another one the following day.

For the first few days I was told my liver showed no signs of improvement. Also my kidneys, spleen and gallbladder were damaged, I had gout, hepatitis, mild pneumonia, pancreatitis was malnourished and dehydrated. Also a huge amount of fluid built up between my liver and stomach (ascites), which had to be drained. I was so weak I couldn’t walk.

How did I get to this point? I’d been drinking every day for over a year. It started off as binge drinking to boost my confidence, and drinking to unwind and cope with stress. Before I knew it I was alcohol dependant and couldn’t function without it.

After the fifth day there was hope – my liver function had improved. I was so happy at this news, but it was still very early days. They were dealing with all the damage I’d caused and each day there were signs of improvement.

After two weeks in hospital I was sent home. Still very unwell, I had several trips back to the hospital for follow-up tests. A biopsy confirmed I had cirrhosis. I had counselling and attended a rehab group. I was told if I ever drank again I would die. The first three years my progress was slow, but improved with every test. I not only had to get my health back, but rebuild my life.
forks over knives

In 2016, I watched Fat, Sick & Nearly Dead on Netflix, a documentary about a very unhealthy man who turned his life around with a juicing diet. Throughout the documentary was a theme of a plant-based diet. Sceptical that your health could improve eating just plants I watched Forks Over Knives. Again, people who were sick were healed by cutting out meat, eggs and dairy. I was overweight, tired with bad skin and low moods, so I thought I’d give this vegan thing a go. 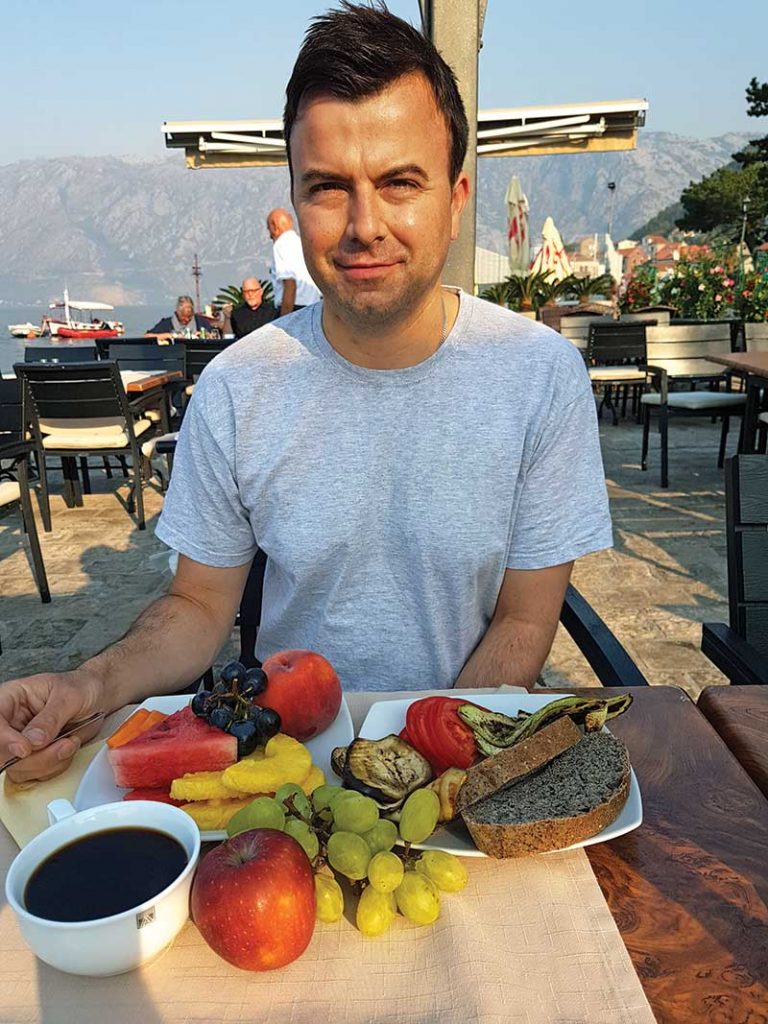 After two weeks I felt better inside and looked better. Also, going vegan was easier than I thought. A couple of months into the diet I started getting comments about losing weight and how well I looked. I noticed my eyes and skin were clearer, my moods better, my nails and hair grew thicker. When I returned to the hospital for a check-up, the specialist commented on how well I looked and about my weight loss – I’d lost over 2 stone. He ran through my tests and they were better than ever before. It confirmed how I felt, a plant-based diet was the key to optimal health.

Every year I have a fibroscan that measures the damage to my liver. The previous two had been 75 kPa. That’s the worst possible score. I was told a score of 12.5 kPa was very serious, so I’d been very worried. Two years vegan and this time there was good news, my score was now 39 kPa. My last scan had gone down even further to 30 kPa. Also, more good news, my liver showed no signs of fatty liver disease.

I decided to talk about my struggles with alcohol and living with liver disease after keeping silent for so long, to give others hope. Seven years ago I was at rock bottom. I was certain I’d die and had given up hope. It was one of the hardest periods of my life, but slowly I rebuilt my life and my health was getting better. I’m in no doubt veganism has helped save my life.