16 best vegan restaurants in Bristol – the vegan capital of UK

Discover the best vegan restaurants in Bristol serving up a delicious array of plant-based dishes in the vegan capital of the world.

Bristol is a city with a growing reputation for its food. The city’s daily lunchtime markets offer street food to suit all palettes, and there are five Michelin-starred restaurants for the finest dining.

Bristol has also been an early adopter of the vegan diet, and celebrated being voted the number one city in the world for veganism in January 2019.

Diners will be overwhelmed with choice when it comes to finding vegan restaurants in Bristol, from enormous hangover-curing breakfasts to an exquisite afternoon tea.

We’ve selected just a few of our favourite vegan restaurants in Bristol guide to help you plan your next trip to the vegan capital of the world.

If you manage to head south of the river this is one of the venues that has to be on the menu.

By serving unapologetically vegan junk food since 2016, Vx has been a staple name in Bristol.

From its iconic monster-shakes loaded with doughnuts and vegan-friendly whipped cream to the incredible mac & cheese burrito with chicken nuggets and crumbled vegan bacon – need we say more?

Dine in and enjoy the atmosphere of classic punk rock anthems to a backdrop of vibrant decor, with loads of merch from t-shirts to magnets to take home with you. 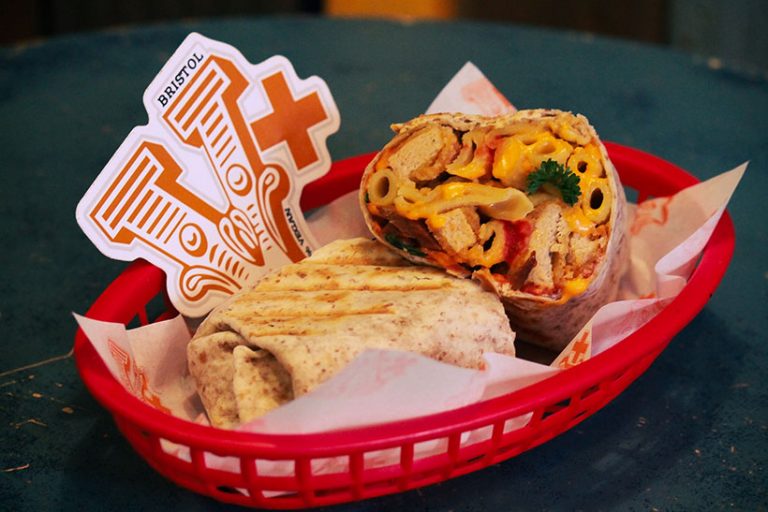 This fully vegan Persian restaurant burst onto the scene in May 2018 and its tables have been full of people sharing food and drinking gin cocktails ever since.

Traditional dishes like gheimeh and ghormeh sabzi are plant-based without losing any of their fragrance, while favourites like fattoush salad and falafel are perfectly executed. And there’s nothing diminutive about their small plates: bring some friends and prepare for a feast. 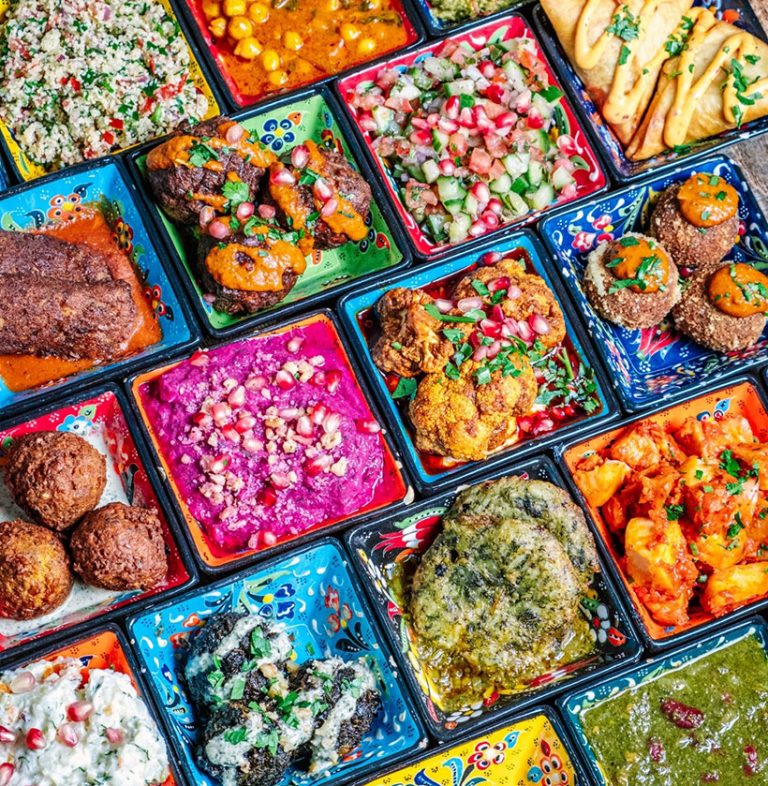 In the side streets of Clifton Village lies Eden Cafe, an all-vegan venue that specialises in great food and memorable taste experiences.

Eden means ‘a place or state of great happiness; an unspoilt paradise’, and that is very much the feel of the venue itself.

Offering a wide range of brunch items you get to make the hard decision of choosing between fresh smoothie bowls, filling burritos and flavourful sandwiches. The prawn marie rose pitta bread is definitely a stand out!

Afternoon tea options are also available, and booking in advance is highly recommended! 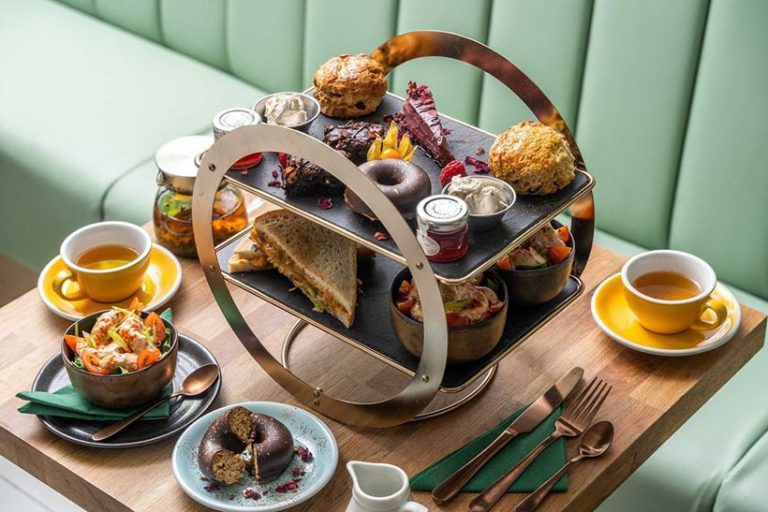 If you have a craving for authentic Italian food that’s also vegan – look no further.

Located in the heart of Bristol in Broadmead, Taste of Napoli is serving up the freshest hot slices of pizza, a range of flavoured arancini balls, plus coffees and desserts for everyone. They even have vegan ice cream by the tub!

With a clear vegan menu and many vegan options available at the counter, they also offer to make anything on the menu that may yet not be on display.

Dine in and relax in a lively atmosphere of local customers and friendly staff members chatting, surrounded by the beautiful imagery of Italian coasts.

On a hot day, it feels like you’ve actually landed in Italy. Buon appetito! 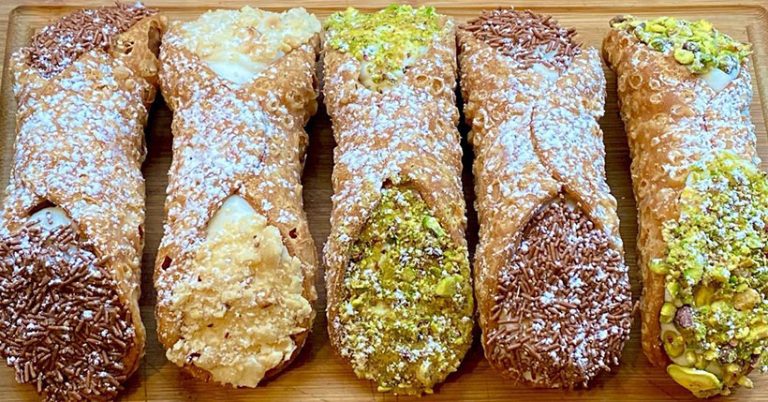 One of the UK’s hottest vegan restaurants has opened its doors in Bristol!

Having made its way across from Brighton, vegan restaurant Purezza has fully made itself at home in Bristol since opening in 2019.

Located on Gloucester Road, the all-vegan venue has opened its doors and offered its full range of amazing vegan pizzas, mains and side dishes – not to mention its indulgent and varied drinks menu.

Dietary requirements are easy to handle as you can pick which base you’d like your pizza to have. Choose from either wholegrain, gluten-free or even hemp bases, and due to the traditional cooking methods, all bases come out just as fluffy!

The doughballs should get a mention as they are simply so deliciously cheesy and go great with any of the dipping sauces! 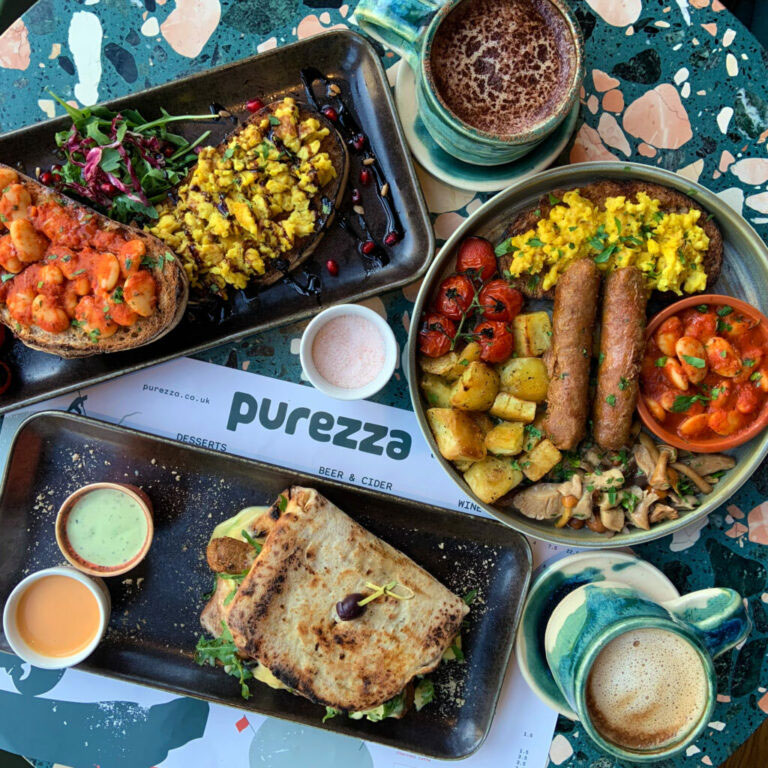 Oowee Vegan is a Bristol institution and a go-to for locals looking for some deliciously naughty vegan grub.

Known for its range of American diner-style vegan dishes, Oowee Vegan’s entirely plant-based menu is an absolute treat for anyone looking for their junk food fix.

Oowee’s vegan menu has proved so popular that it was even named Deliveroo’s ‘Restaurant of the Year’ in 2019. Since launching its all-vegan venues in Bristol, the junk food specialists have expanded to open more sites in Brighton and London.

Their entirely vegan venue is packed with a range of burgers with either ‘beef’ or ‘chicken’ fillings, and even some seriously tasty kebabs! All menu items come with a flame indication to show how hot each one is, so you can go as spicy as you wish!

Seitan’s Corner even has a heat food challenge that is not for the faint hearted! Rated at 12.5 million scovilles, it is most certainly an impressive feat to finish.

Those that do get a t-shirt to commemorate the win and a picture on the wall of flame! 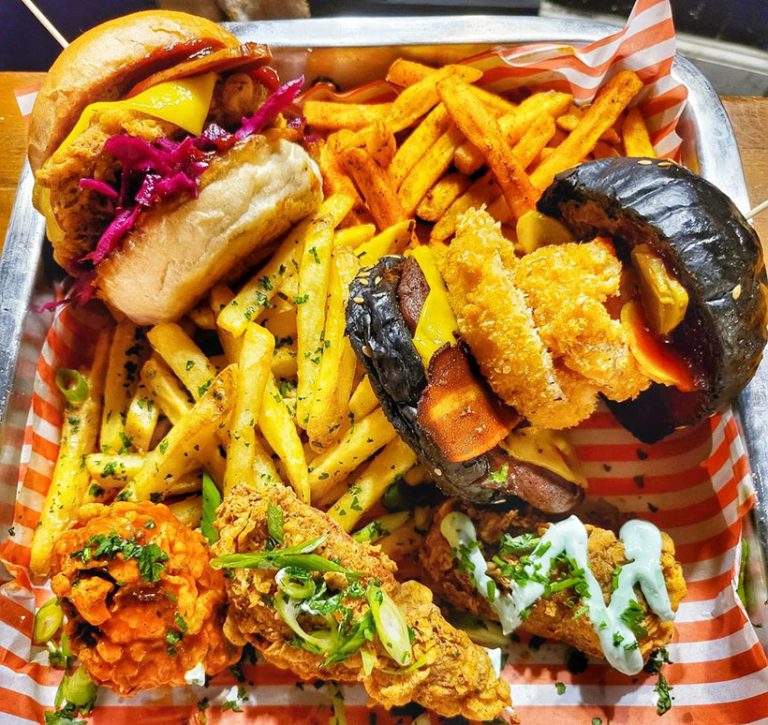 Got a sweet tooth? There’s no better place to indulge than at Bristol’s first all-vegan doughnut shop – Future Doughnuts!

With it’s ever-changing menu of creative vegan doughnut flavours, its freshly fried sourdough doughnuts have been taking the city by storm.

Plus, as it’s located near Bristol Temple Meads train station, it’s a great place to grab a bite to eat before a long journey. 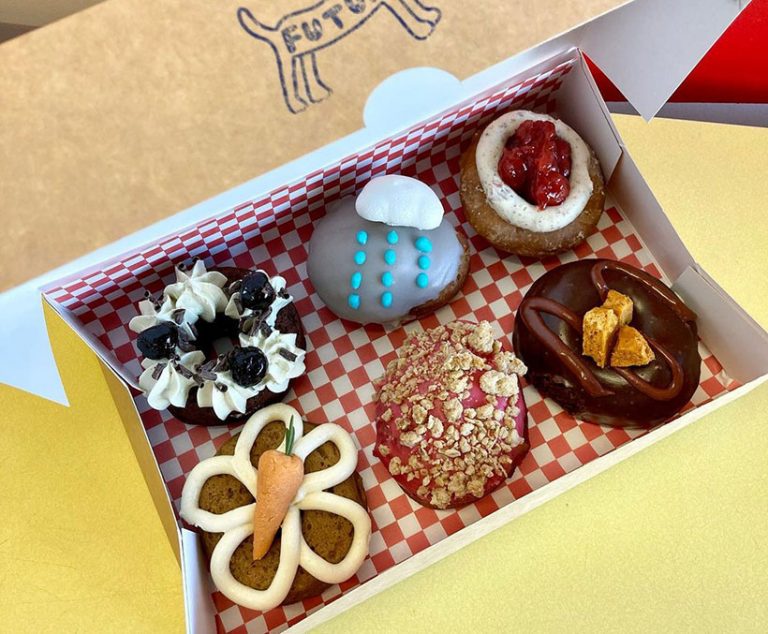 Bulrush joined the exclusive club of earning a Michelin star in October 2018, but despite its obvious prestige, it remains a supremely friendly neighbourhood restaurant in an upmarket residential part of Bristol.

Their exceptional eight- or nine-course seasonal tasting menu is usually vegetarian, but the team are happy to make it vegan. Expect the unexpected, like a beautifully presented truffle ice cream accompanied by a croissant mousse. 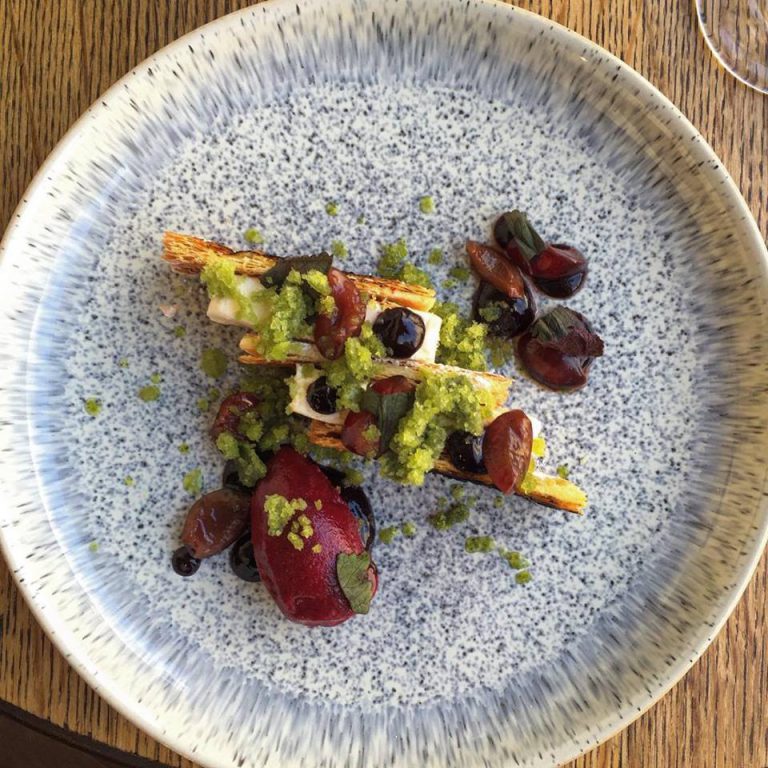 Heather Simmonds and Melanie Taylor have been running their street food stall since 2013, offering vegan dishes including huge portions of samosa chaat and jackfruit jalfrezi, along with the biggest bhajis you’ve ever seen and their delicious parsnip and ginger pakoras.

While sadly the restaurant in Wapping Wharf is now closed, the food van still operates around various parts of Bristol, notably the Tobacco Factory Sunday market. 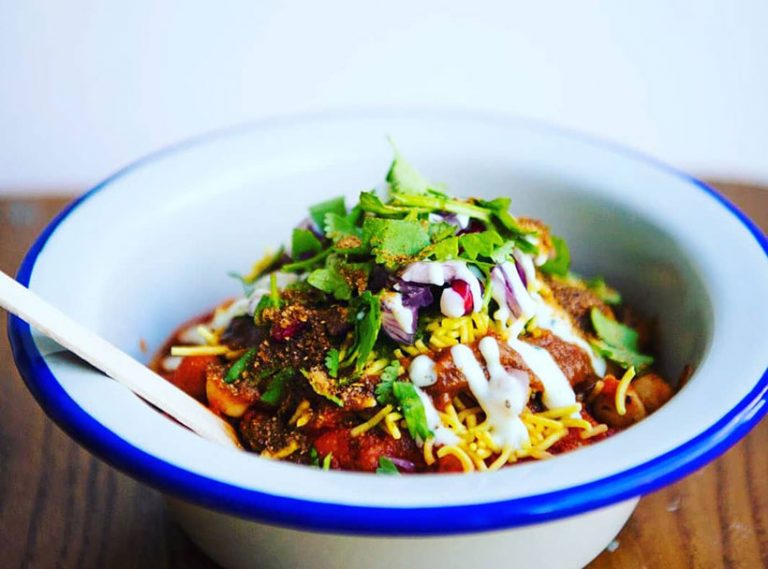 A pub run by a pair of brewers can’t be beaten. Bob Cary and Kelly Sidgwick began running their brewery, Good Chemistry, in 2015, and along with Sam Curley opened their first pub in December 2018.

As you’d expect there’s a huge selection of beers – both their own and from other independent breweries – and all of Good Chemistry’s tipples are unrefined, meaning they are suitable for vegans. They also have a brewery taproom on William Street in St Philip’s, open from April to October. 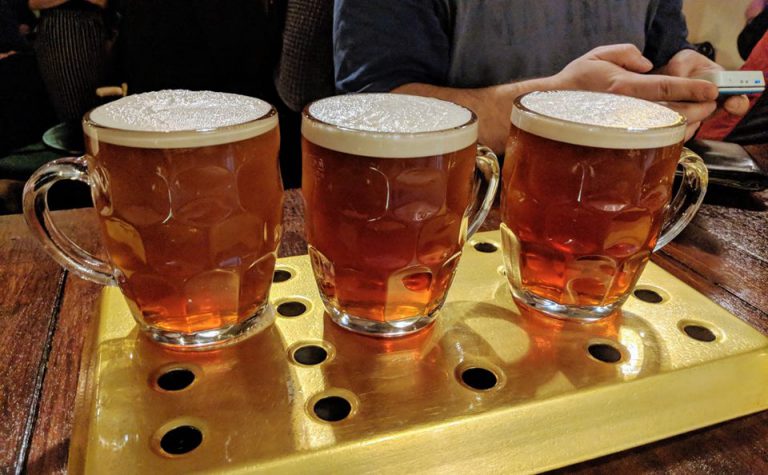 The only thing Bristol is more famous for than food is its music scene, and if you’ve indulged a little too much in the latter you need to know about the Bristolian and its enormous breakfasts.

Tucked away on a quiet street off Stokes Croft, it has a wild front garden dripping with greenery in the summer and a cosy interior stuffed with brightly coloured cushions that you’ll want to nestle in all day. 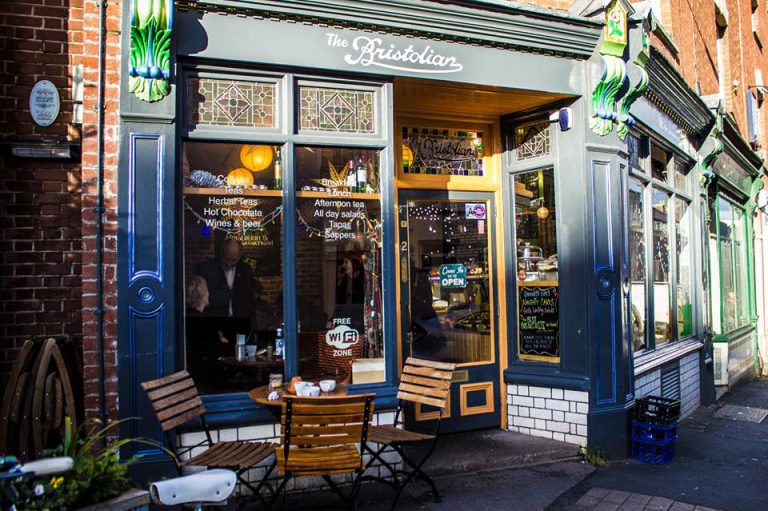 Originally Vegan Vend started with the one vending machine named Daisy, but has since expanded with others!

Set up by Remi Toth following a successful crowdfunding campaign in 2018, the vending machine is stuffed full of fresh sandwiches and wraps, from Coronation chickpea to pizza pockets, along with treats from local suppliers.

Remi was inspired to set the vending machine up after finding it hard to find tasty on-the-go vegan options, and rumour has it that it is now impossible for any vegan within a hundred-metre radius to resist the pull of a millionaire shortbread.

You can find Tiger-Lily on the middle floor at Cabot Circus, and both Willow and Violet around Frenchay Campus. 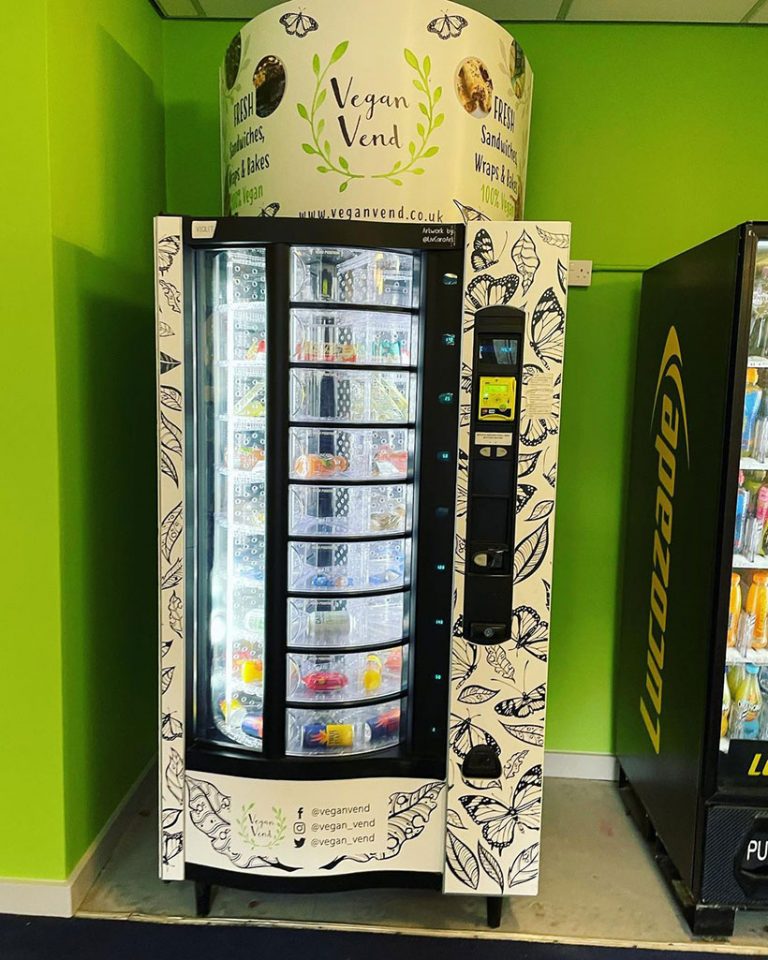 Tucked away in St George lies Fi Real, a 100% vegan and family-run restaurant serving up the best vegan Caribbean in Bristol. The expansive menu covers Jamaican classics with a vegan twist, with plenty of gluten-free options too.

The Jerk-fried Tofu is one of the most popular dishes, and the dumplings are a must as a side to whichever dish you choose. Choose fried plantain as a dessert to round it all off.

Expect generous portions, wonderful service, and a full stomach with any visit! 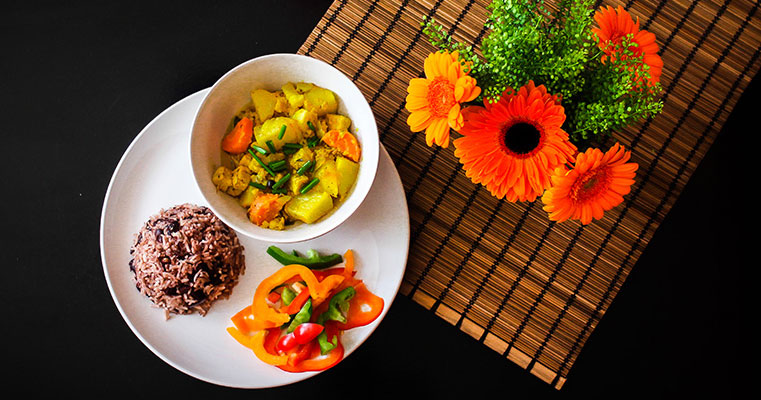 Conveniently located in the centre of Bristol, Tuk Tuck offers a hearty selection of vegan options that will be hard to choose from!

The flavourful katsu curry can come with either crispy tofu or crispy pumpkin, both served in a thick katsu curry sauce with sticky white rice and salad. The kimchi fries make for a great sharer, and there are several sides of edamame beans, gyoza dumplings, or spicy tofu bites.

Being a mixed dietary food venue, you can go with anyone and there’ll be something for everyone to enjoy. 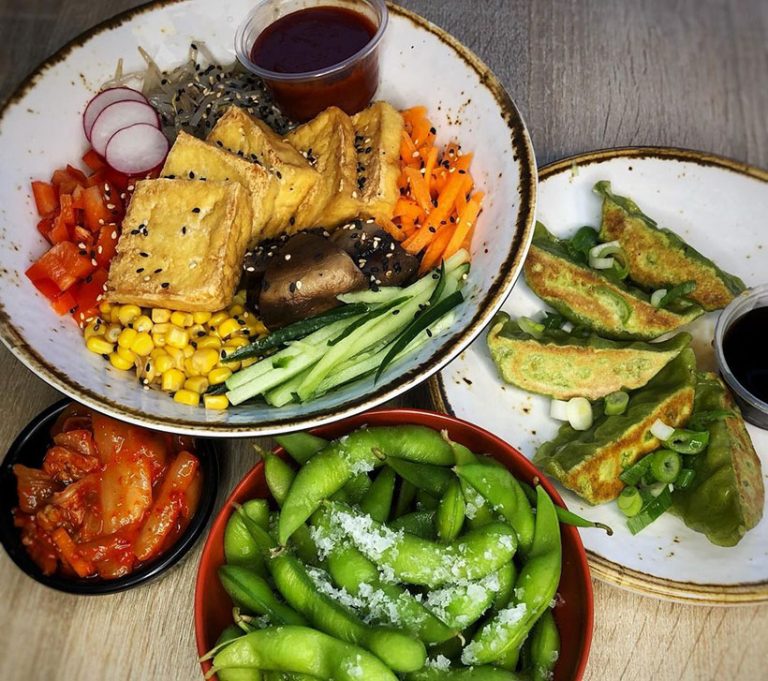 Located in Wapping Wharf, the Greek-themed cargo container can serve up all sorts of vegan options, complete with vegan dips and sauces so as to not miss out on any aspect.

Choose from wraps of different sizes to salad boxes topped with either plant-based chicken, gyros or halloumi. There’s even The Beast Vegan Gyros Box which is a supersized portion. Chips also come with everything so it’s a hearty meal whatever you decide!

Overlooking the harbour, it’s a must for a scenic dining experience. Or you could get takeaway and grab a spot along the harbour and watch the water activities. 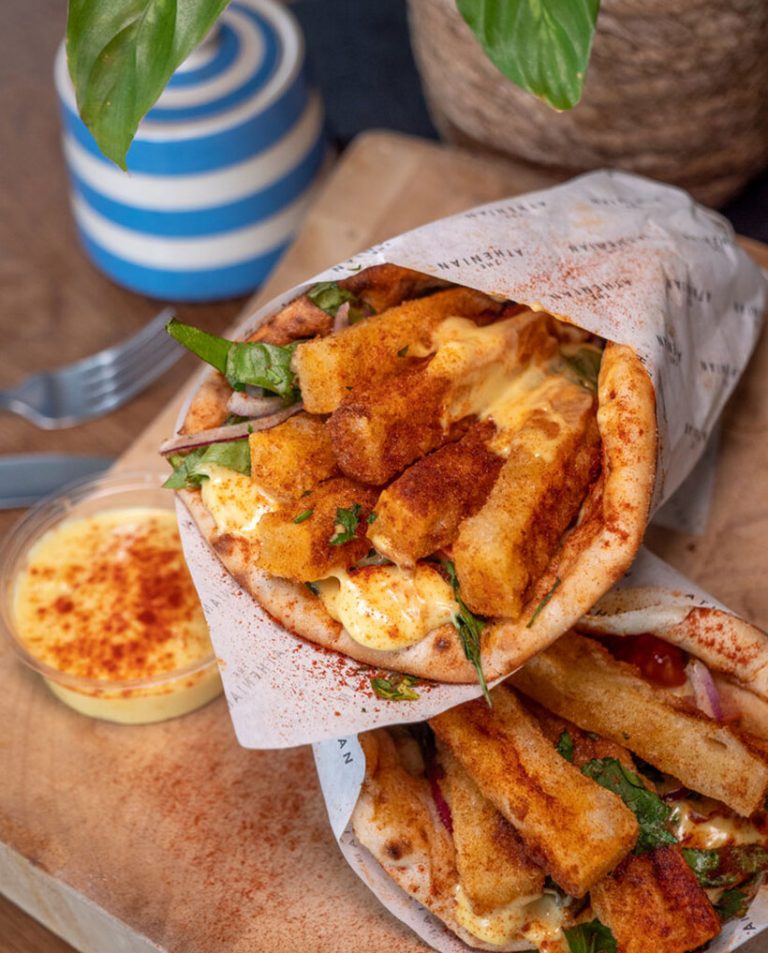 Now that you’ve discovered the best vegan restaurants in Bristol, take a look at what London has to offer.

Check out our handy guide to the best vegan restaurants in London!