Whether it’s as a sugar substitute, a post-workout drink or oil in a pan, the coconut seems to be the perfect alternative to traditional produce, but is it really a healthier option…? 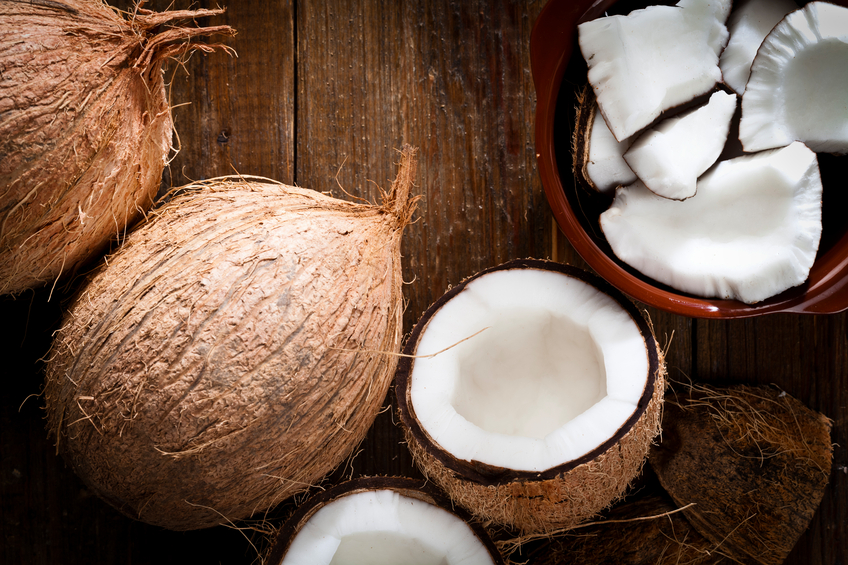 Coconut water, oil, sugar, flesh, milk and yoghurt; coconut is filling up our supermarket shelves in many guises – but what benefits can it bring to our diet?

Although coconut is technically a type of fruit, it is classified as a nut due to its high fat (particularly saturated fat) content in the flesh and its products such as coconut oil.

Saturated fat is the type of fat which has been found to increase both good and bad cholesterol, leading to an increased risk of heart disease. But can there can be some benefits too?

Coconut sugar has a lower GI than standard granulated sugar, however a similar calorie content per gram. It may be a healthier alternative to traditional granulated sugar, but it is still an energy-dense food which should only be used on special occasions.

Similarly, coconut oil is becoming more and more popular for roasting and baking. It has a similar nutritional profile to butter in that it has a high saturated fat content, which is thought to be less harmful to health than initially thought, particularly the type of saturated fats which are found in coconut oil: Lauric acid and Myristic acid.

The oil also contains some poly- and mono-unsaturated fats, which bring additional health benefits. It is still an energy-dense food so should be used in moderation.

Coconut milk is frequently used as a dairy supplement. There are two types of coconut milk widely available – one is about 8% coconut cream mixed with water, sugar and preservatives.

The other is mixed with rice milk without the need for sugar and requires less preservatives. Both have a similar calorie content to soya milk (about half that of semi-skimmed milk), but a much lower protein content than both soya and semi-skimmed milk.

You can also now buy coconut yoghurt which is great for those who are lactose-intolerant and who fancy a change from the soya varieties! It is much higher in fat than both natural dairy yoghurt and soya yoghurts, but also much lower in carbohydrates.

There has been a lot of hype recently about the fact that the saturated fat found in coconuts (called medium-chained triglycerides) is healthier, but this hasn’t been proven in humans yet, only animals!

Coconut water – the juice found in the middle of a cracked coconut – is now marketed as a highly hydrating fluid. It has less sugar than fruit juices and more minerals such as potassium, sodium, magnesium and calcium.

These properties are great as a post-workout drink if you’ve only been doing moderate exercise, but there isn’t enough protein or carbohydrate if you’re undergoing vigorous exercise of more than 1 hour.

You can achieve the same results by eating a balanced diet and having a banana and a glass of milk after a workout, which costs far less than a bottle of  coconut water!

The fresh flesh is delicious – full of vitamins and minerals and goes really well in a smoothie. Enjoy as a snack – but go easy on your portion sizes.

Some studies have found that trialling a coconut oil supplement has encouraged weight loss, however 1 tbsp coconut oil provides 115kcal and 13g saturated fat (double the kcal and saturated fat that you’d find in the same sized lump of cheese).

So it’s best to stick to a mono-unsaturated fat to cook with such as rapeseed oil, which has a high smoke point (therefore less harmful free radicals) and has been proven to increase your good cholesterol and reduce your bad cholesterol.

New studies may find that it’s healthier for animals or that some people lose weight, but adding 115kcal to your food and drink is going to increase your calorie intake – so it’s not worth the risk and it’s more likely to cause weight gain. In short, it’s an unproven ‘fad’ as of yet.