All about vitamin A: What vegans need to know

Also known as retinol, vitamin A plays an essential part in our health. Dr Justine Butler explains why.

Chemists have always been interested in the bright colours found in nature. In 1831, German chemist Heinrich Wackenroder used carrots to isolate the yellow/orange pigment beta-carotene that gives them, and other similarly coloured fruit and vegetables, their rich colours. He came up with the name from the Greek ‘beta’ and Latin ‘carota’, meaning carrot.

Beta-carotene is the most common form of carotene in plants. It is also known as ‘provitamin A’ as our bodies convert it into vitamin A (retinol). Carotenes are found in green leafy vegetables and yellow and orange fruit and vegetables — such as kale, sweet potatoes and cantaloupe melons. Generally, the greater the intensity of the colour, the more beta-carotene they contain. We convert it according to how much we need, so you can’t have too much.

Retinol, or preformed vitamin A, is found in animal foods such as eggs and dairy products. Your body can’t control how much it absorbs and too much can be harmful. Because of this, beta-carotene is a safer source of vitamin A than retinol.

We need vitamin A for healthy skin and mucus membranes — the thin skin that lines parts of the body, such as inside the nose and mouth, and which produce mucus to protect them. It also supports our immune system, eye health and vision and betacarotene is an antioxidant — protecting our cells and DNA from damaging free radicals.

Diets rich in carotenes are linked to a lower risk of some cancers, heart disease, stroke, age-related macular degeneration and cataracts. Research suggests that you need the whole food rather than a supplement, to obtain these benefits.

How much do we need?

Men need around 0.7 milligrams a day and women, 0.6 milligrams of per day — only a very small amount but that small amount is vital. Signs of deficiency include frequent and persistent skin infections, mouth ulcers, thrush or cystitis, dandruff and dry hair, dry eyes, sore eyelids and, in very extreme cases, night blindness.

During the Second World War, rumours circulated that British RAF pilots were good at night-flying because the carrots they ate helped them to see in the dark. A classic example of how propaganda helped to keep the RAF’s new radar technology a secret!

Vitamin A is required for your body to make rhodopsin, the pigment in your eyes that operates in low-light conditions. If you have a vitamin A deficiency, you may develop nyctalopia, or night blindness. Eating carrots could correct this but only to the same level as a normal healthy person — eating carrots won’t equip you with military-style night-vision! 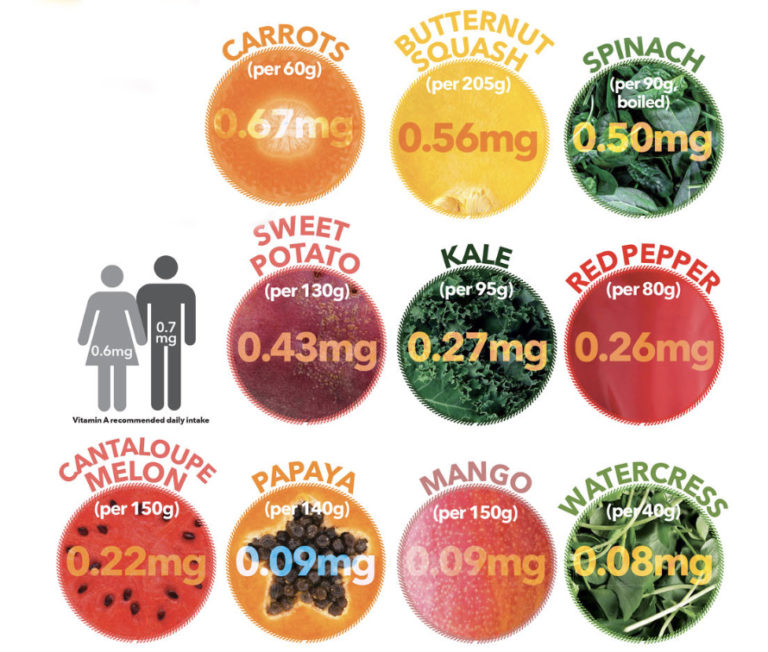 The impact of genetics

Some research suggests that people with more body fat are less able to convert carotenes into vitamin A. There is also a genetic variability in carotene metabolism where certain genes may help or hinder your ability to convert it. There’s nothing you can do about this but you can change your diet to include more green leafy and yellow-coloured vegetables along with plenty of orange coloured fruit.

Vitamin A is a fat-soluble vitamin, which means it does not dissolve in water and is absorbed best when taken with fat-containing foods. You only need a small amount — one study suggests including 2.4 to 5 grams of fat per meal with cooked vegetables to help optimise conversion.

Another study found that eating fat-containing avocados with tomatoes or carrots enhanced absorption. Try sprinkling a little flaxseed or olive oil on cooked vegetables, add a dash of salad dressing to your green salad and eat a handful of nuts with your daily fruit to help improve absorption and conversion.

Can you have too much?

High intakes of vitamin A from animal foods, such as oily fish, liver or supplements, can be toxic and has been linked to birth defects — hence it can be dangerous if eaten in pregnancy.

Excess vitamin A from animal sources may also cause weaker bones, which is of particular concern to middle-aged and older people. Adverse side effects have been observed with vitamin A intakes over 1.5 milligrams — easy to reach when you eat liver or liver pâté more than once a week or take a fish liver oil supplement.

Large doses of beta-carotene from supplements (not from food) may increase the risk of lung cancer in smokers, in people who have been heavily exposed to asbestos at work and possibly in other people, too.

The official advice is: if you take supplements containing vitamin A, make sure your combined intake from both food and supplements doesn’t exceed 1.5 milligrams a day.

However, you can’t have too much beta-carotene from plant food so there is no limit on how much you eat of foods which contain it. Your body simply stops converting it into vitamin A when it has enough.

The only side-effect you may experience if you eat large amounts of beta-carotene-rich foods such as carrots is a slight orange colouration of your skin — called carotenodermia. It’s not harmful and disappears when your intake drops. A varied, vegan diet rich in colourful fruit and vegetables provides a safe supply of all the vitamin A you need.

Viva!Health is part of vegan charity Viva! It monitors scientific research linking diet to health and provides accurate information on which to make informed choices about the food you eat. www.vivahealth.org.uk