Vegans and Vitamin B12: Where to get B12 on a vegan diet and how much you really need

Everywhere we turn we’re bombarded with information on how great B-vitamins are for us, but how much do we really know about what they do and how we can achieve the right levels in our diet?

With eight different types of B-vitamin to worry about including, where do we begin? The long standing assertion about vegans not being able to get any vitamin B12 in their diet is one we hear all too often, but is there any truth to this claim?

Here we debunk the veganism and vitamin B12 deficiency myth and discover the best sources of B12 for vegans.

How do we get vitamin B12 on a vegan diet?

Although a plant-based diet provides our bodies with almost everything they need to thrive, vegans must take vitamin B12 supplements.

Vitamin B12 is made naturally by bacteria in the soil. Traditionally, people and animals would have obtained this vitamin by eating food from the ground.

However, food production systems are now so sanitised and scrubbed clean that we do need to take a supplement.

This is because signs of deficiency include extreme tiredness, lack of energy, muscle weakness, depression and even cognitive problems1.

Animals are no different to us and are not magical creators of vitamin B12. Meat, eggs and dairy foods contain it because farmed animals are given supplements too – their natural diet having been depleted2 in much the same way as our own.

The argument to eat meat and dairy for B12 is therefore invalid — so why not get your B12 straight from the source?

Why do we need it and what are signs of B12 deficiency?

Common symptoms of a B12 Deficiency:

Vitamin B12 is essential for the maintenance and support of most of the vital processes that keep our body vibrant and healthy every day. Perhaps most importantly of all, it plays a vital part in the formation of red blood cells, which carry oxygen to every part of the body.

It works closely with folic acid to make red blood cells, which help iron to work better in our bodies. Anaemia can occur when a lack of B12 or folate affects our body’s ability to produce enough red blood cells. A lack of B12 can also lead to a raised blood levels of an amino acid called homocysteine which, at high levels, is linked to heart disease.

Vitamin B12 also helps maintain healthy nerve cells and produces DNA — our genetic material3. Stressing its importance, Joe Jacksons adds: “If you still feel that B12 isn’t important, then look at it this way: every cell in the body needs it in order for DNA replication, and for new tissues to be built.

“In other words, without B12 we would quite literally waste away, and not have our own identity or “blueprint”.”

Another of its main roles is the regulation of the nervous system, where it plays a part in the production of a material called “myelin sheath”. This material acts as an insulating cover for nerve cells, and allows for signals to be sent from the brain and spinal chord to the rest of the body.

Production of neurotransmitters in the body that are essential for the regulation of mood, pain reception, and sleep also rely on adequate amounts of B12 for them to be synthesised effectively. Without successful neurotransmitter production, neurological decline may occur.

It also helps our immune systems to function normally and can even affect our mood. 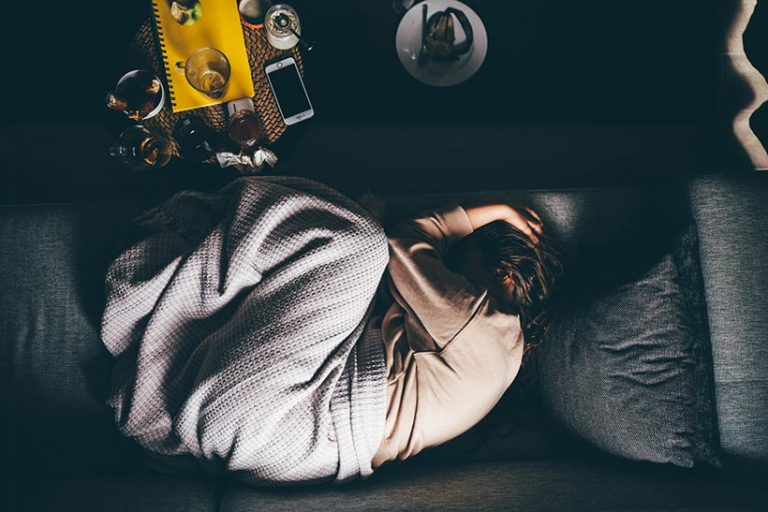 What is the recommended intake of vitamin B12?

We need only a little B12, and the government’s recommended intake is 1.5mcg a day (a microgram is a millionth of a gram), but getting that small amount is vital.

US guidelines are slightly higher, at 2.4mcg, and the European Food Safety Authority suggest an ‘adequate intake’ of 4mcg a day.

Some studies4 suggest that vegans have lower B12 levels than people who eat meat and dairy, but many studies have only included B12 from food and ignored intake from supplements.

The UK National Diet and Nutrition Surveys have found low vitamin B12 levels are not uncommon5 among the general population, regardless of diet, especially in people over 50. The reason is that absorption is a complicated process that declines with age.

Why does our absorption of B12 decline?

In order to absorb B12, it must first bind with a protein produced in the stomach called intrinsic factor. If you don’t make enough of this protein, you may not be able to absorb sufficient B12, even if your diet is awash with it.

Nutritional therapist Joe Jackson explains: “Upon absorption in the small intestine, as much as 5mg can be stored in the liver at one time. This may not sound like a lot, but in reality this reserve can be stored for up to five years, as the body only needs around 0.2% of this to be released every day in order to function efficiently.

“Therefore, even if someone is not obtaining enough through their diet, their past reserves may be able to sustain them for such a long period of time, that symptoms of eventual deficiency may take years to manifest.”

Another reason absorption declines with age is because the amount of stomach acid we make can also drop as we get older.

The B12 from meat is bound to animal protein so stomach acid is needed to release it before it can be absorbed6. The B12 in fortified foods and supplements is not bound in this way and so is easier to absorb. 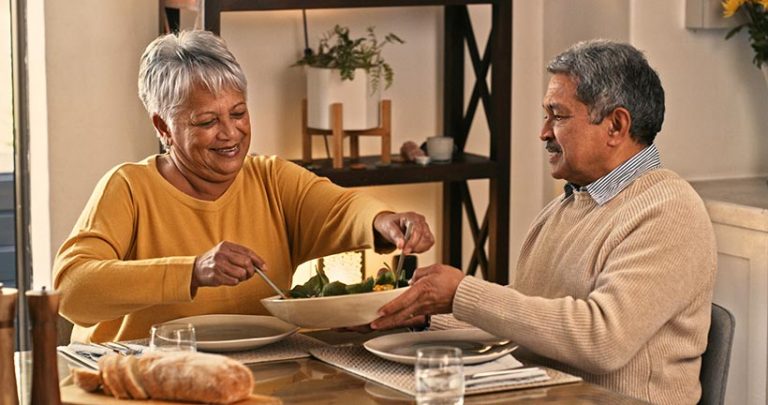 B12 needs to bind with proteins produced in the stomach, so if you don't make enough you won't be able to absorb sufficient levels. Our absorption also declines with age. Image credit: Kobus Louw via Getty Images

In the US, all adults over 50 are advised to obtain their B12 from supplements or fortified foods because of the high numbers of people in this age group who have a reduced ability to absorb it from animal foods.

Vegans have an advantage if they routinely include fortified foods and supplements in their diet.

Vitamin B12 is a water-soluble vitamin, so what you don’t need is excreted in your urine. Excessively high doses could be harmful but government guidelines say that taking up to 2,000mcg a day is unlikely to cause harm.

What are the best sources of vitamin B12?

This vitamin can be lost in cooking, so heating B12-fortified plant milk in a microwave, for example, can destroy the B12 in a couple of minutes.

On a hob or steaming, the milk would have to be at or near boiling point for five to seven minutes to destroy a significant amount.

The best plant sources of B12 include yeast extract (Marmite/Vegemite) and B12-fortified foods such as nutritional yeast flakes, plant milks, vegan yoghurts and desserts, breakfast cereals and margarine.

The body can store B12 for two to four years without being replenished so it can take a considerable time for any problems to develop after, say, changing your diet. Having said that, you should not rely on your body’s stores of B12. 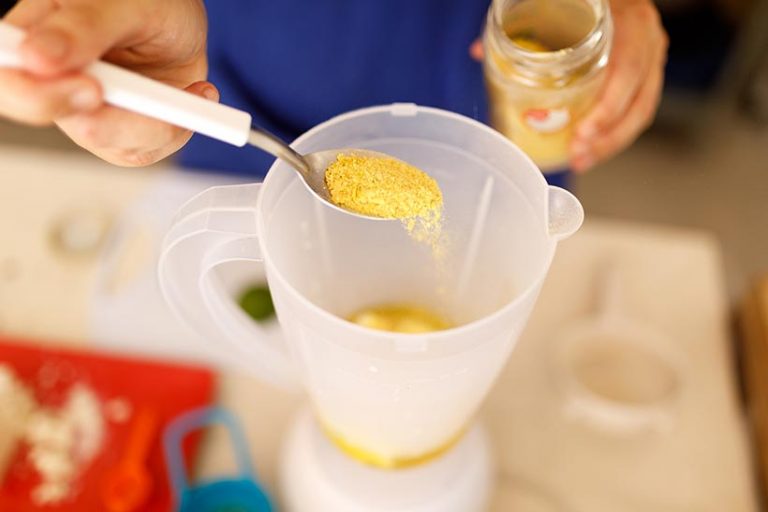 The best plant sources of B12 include yeast extract and B12-fortified foods such as nutritional yeast flakes, plant milks, and breakfast cereals. Image credit: Capuski via Getty Images

Should vegans supplement vitamin B12?

Levels can be easily checked by a doctor and any deficiency can be treated with supplements or a course of injections. It’s important not to ignore your intake of B12 as by the time any symptoms develop, the damage may have already occurred.

Should you take a supplement? Yes. Vegan health bodies recommend consuming fortified foods with a regular use of a supplement — particularly for children.

This, and a well-planned and varied vegan diet, will meet your requirements and provide a healthier and safer source of vitamin B12 than obtaining it from animal products.

There are two forms of B12 supplement:

Vegan foods fortified with Vitamin B12

As well as taking supplements to boost their B12 levels, vegans can also ensure they’re getting enough by eating foods fortified with B12.

There’s more good news for vegans taking fortified foods too, as Joe Jackson explains: “”Digestive disorders such as Irritable Bowel Syndrome, Chrohn’s Disease, Dysbiosis (an imbalance of gut flora), or low stomach acid production can negatively affect the way food is digested and absorbed, due to either an imbalance of essential bacteria, a physical manifestation, or inflammation.

“This readily digestible form of B12 does not require your digestive system to work as vigorously, and therefore may help increase absorption rates dramatically where digestion may otherwise be compromised.”

Below are some of our favourite vegan foods with B12 and how much you need to eat to get your daily recommend micrograms of vitamin B12 (1.5 micrograms per day).

If you’re taking a trip to the UK’s capital, make sure you don’t miss the best places to eat with our guide to vegan restaurants in London.