Learn more about the vegan health benefits of poppy seeds and explore what these tiny seeds have to offer - and who should avoid consuming them.

Poppy seeds can provide of lot of health benefits and are absolutely packed with nutrients.

These seeds have been in and still are a part of many cultures and are traditionally consumed without side effects in much larger quantities than what we eat in a slice of bread.

They provide many essential and valuable nutrients and taste delicious, which is why they’re so popular!

Poppy seeds have helped to boost people’s nutrient intake for millennia and nutrition science is only just the beginning to appreciate their value.

Find out how they are good for you, and get an idea of what tasty vegan foods you can make with them.

But be aware that there can be limitations on how much you can consume, so be sure to check where you get yours from.

Poppy seeds provide lots of great nutrients to those specifically on a vegan diet.

These seeds are very high in calcium, with just one tablespoon containing 126 milligrams – the recommended daily intake is 700 milligrams.

Poppy seeds also contain good amounts of other important minerals that are essential on a vegan diet, such as iron, magnesium, manganese and zinc.

On top of that, they’re a great vegan protein source, with just one tablespoon providing 1.6 grams – and offer some valuable fibre and unsaturated fats.

The dark blueish colour of poppy seeds means that they contain some powerful antioxidants called polyphenols which help protect your tissues and DNA from damage and support your immune system.

In a nutshell, poppy seeds are full of important nutrients and are certainly worth adding to your diet. 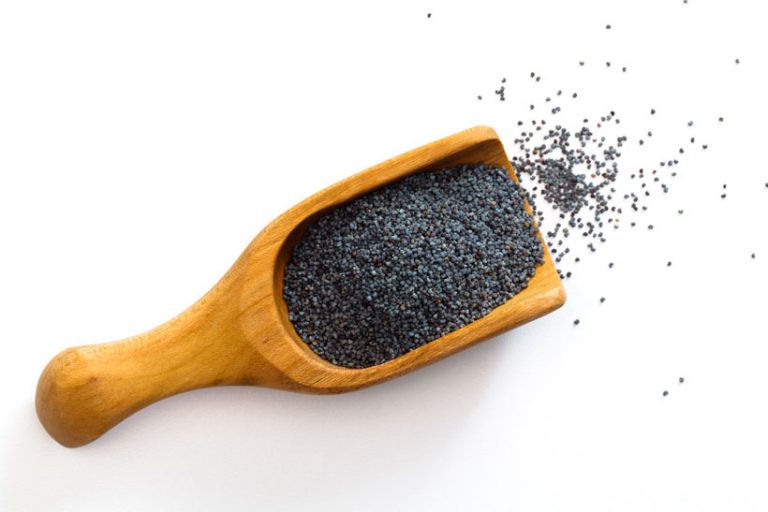 A wooden scoop of poppy seeds. Image via Getty.

Who should avoid poppy seeds?

Do not give poppy seeds to babies and toddlers. The old folk remedy of poppy seeds boiled in milk to pacify a crying baby may result in an accidental overdose.

Even though washed poppy seeds may only contain trace amounts of opioids, it may be enough to affect a small child.

It is also strongly advised that pregnant people do not consume poppy seeds either as they can have a high amount of toxins which can risk both lives during pregnancy.

Poppy seeds are also very poisonous for dogs, and if consumed could lead to coma and even death.

Can poppy seeds make you fail a drug test?

Manufacturers use the sap of the poppy plant to make drugs such as heroine, morphine and oxycodone which are highly addictive and dangerous.

As a precaution, athletes should avoid eating anything with poppy seeds a few days before and during a competition so as to avoid any possibility of drug tests showing trace amounts of codeine and morphine in their urine.

Poppy seeds don’t contain any of these opioids but they can become contaminated during harvesting or processing because the poppy pod is rich in opioid sap, also called poppy latex.

This is why poppy seeds are usually washed before being packed and sold for human consumption. 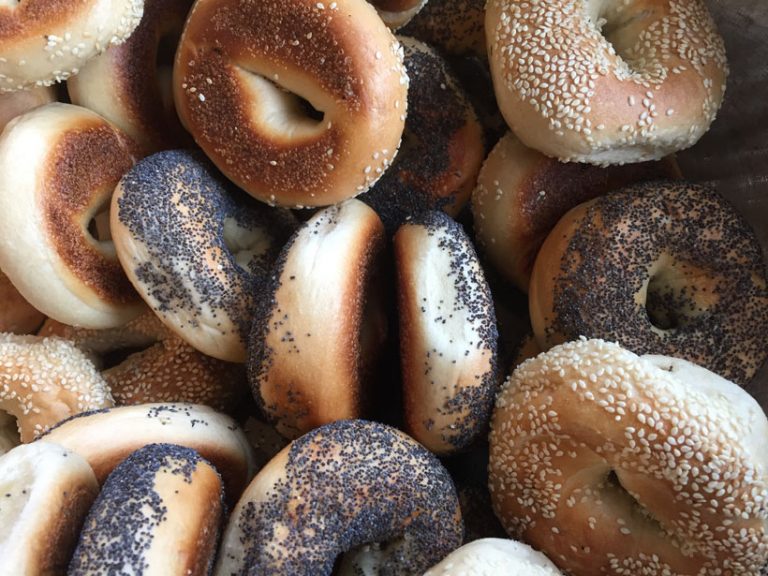 A big batch of poppy seed bagels. Image via Getty.

How to use poppy seeds

So what can we do with these seeds in the kitchen?

Although they are high in calcium, the problem is that it’s estimated that we absorb only between 8-15% of poppy seeds’ calcium because they also contain compounds that inhibit its availability.

If you soak and cook or bake them – think poppy seeds cake, pastries, or savoury dishes – it increases the calcium availability but the exact figures aren’t known.

The tiny seeds are very versatile but many of us are unsure how to use them. You could try a layer of poppy seeds as a crunchy topping on bread, bread rolls and bagels.

Or stir them into the dough for cakes and muffins, make savoury crackers with them or throw a spoonful in a curry or salad dressing.

If you feel more adventurous, soak them and then grind them into a paste in a food processor. It makes a wonderful sweet pastry filling – simply mix the paste with sugar, a little corn starch and a splash of water, then bring to a boil briefly until it thickens.

You can also add raisins or chopped prunes for extra sweetness.

This mixture can be used as a filling in cakes, pastries or strudels, and it makes a nice topping on a tray bake.

Soaking the seeds beforehand also increases the calcium availability so it’s a win-win.