6 benefits of coconut milk, from health to cooking

Katy Beskow looks at the benefits of coconut milk, why it's an essential ingredient in any vegan store cupboard, and how to make the most of this tropical delight.

Coconut milk is a tasty and creamy plant milk, which is versatile enough to be used for cooking and in hot drinks. It is readily available in supermarkets and offers a number of health benefits.

What are the benefits of coconut milk?

How is it made?

Coconut milk is made by finely grating mature, fresh coconut flesh and combining it with water, creating an opaque, snow-white milk. This milk is then treated with high heat to increase its shelf-life and reduce the risk of spoilage.

Sometimes, stabilisers and/or emulsifiers such as guar gum can be added to the milk, to reduce the natural separation that can occur between the water and the fattier grated coconut flesh.

When you open a fresh coconut, the clear liquid that flows is coconut water, not coconut milk. Coconut water is often obtained from young coconuts, rather than mature coconuts where is flesh is sweet and rich enough to be turned into coconut milk. 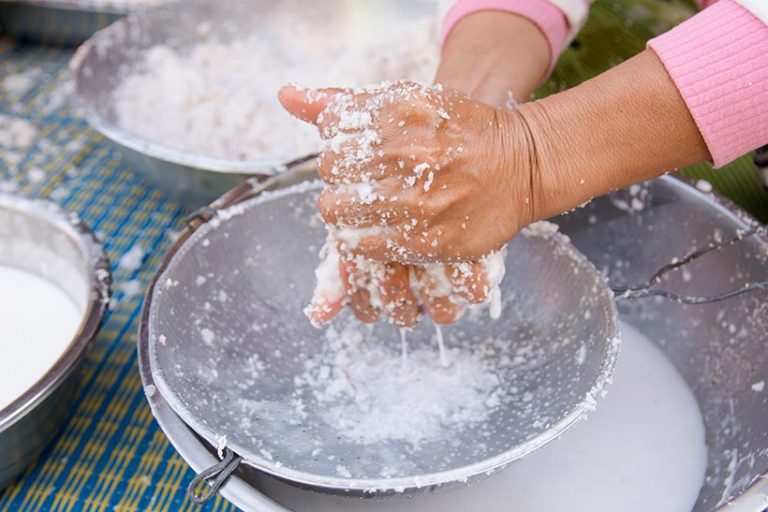 Coconut milk is made by grating coconut flesh and combining it with water. You can even make it yourself by hand by squeezing the mature flesh until the milk runs out. Image credit: Tevarak via Getty Images

Canned coconut milk is a thick and rich liquid, primarily used for creating a creamy base in recipes, and is the version that comes to mind when initially thinking about coconut milk.

Canned coconut milk is highly concentrated, making it ideal for creating a rich base in so many dishes, but do bear in mind that the fat content is high, so consume in sensible moderation.

Coconut milk in a carton is a thinner liquid with a higher amount of added water, making it perfect for adding into hot drinks, pouring over cereals, baking, and as an everyday alternative to cow’s milk.

It is often fortified with additional vitamins and minerals including calcium, D2 and vitamin B12 so you can be assured you are enriching your body with all the good stuff!

Coconut milk from the carton is found in supermarket chillers, and is also available as a long life version on the ambient shelves, from popular brands including Koko, Alpro, Plenish, and Rude Health in the UK. Look out for no added sugar varieties. 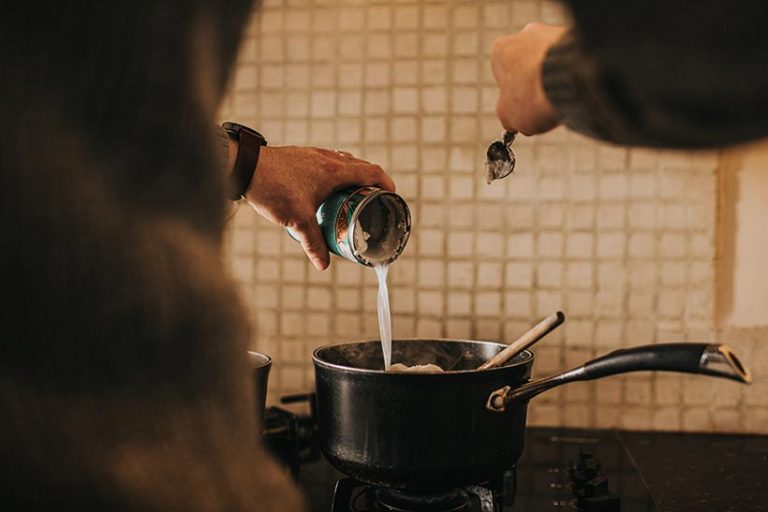 Canned coconut is rich and thick and perfect for using as a creamy base in recipes. Image credit: Catherine Falls Commercial via Getty Images

Which coconut milk do you use for a curry?

For the perfect creamy vegan curry, use canned coconut milk, full-fat for the best richness (unless you’re on a calorie or fat-controlled diet).

If your coconut milk has been stored at a cooler temperature, you may find that the liquid and creamier part has separated, so simply give the can a good shake before opening.

The two parts will also combine again fully when heated in your recipe. Canned coconut milk can vary with the additives used, some containing additional stabilisers, thickeners and emulsifiers to stop separation, so always check the ingredients list on the label if you are reducing your intake of additives.

The current price of 400g canned coconut milk is between 70p-£3 depending on price and retailer.

Can you freeze coconut milk?

If you’ve got some canned coconut milk left over and don’t want to waste it, simply pour it into an ice cube tray and freeze it for up to 3 months. You can then simply use the coconut milk from frozen by ‘popping’ it into curries, or blend into a smoothie, or frozen vegan dessert with fruit.

Dishes made from coconut milk including curries and soups can be fully cooled and frozen for 2-3 months, making it a perfect ingredient for batch cooking.

Coconut milk from a carton may not freeze as well, often becoming grainy when defrosted, so it’s best to use it all up while fresh. 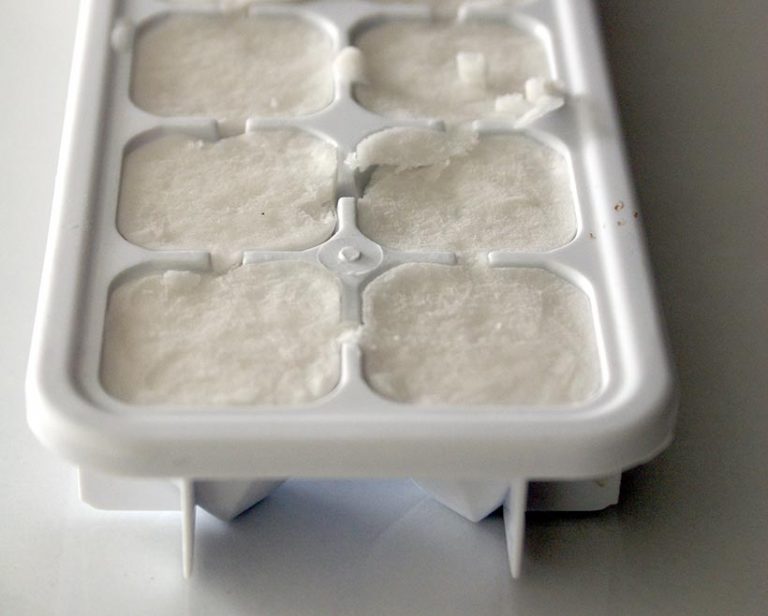 Leftover canned coconut milk can be poured into an ice cube tray and frozen for up to 3 months. Image credit: Jerneja Ribnikar via Getty Images

Coconut cream vs coconut milk- what are the differences?

Similarly to other types of cream and milk, coconut cream has a much higher fat quantity than coconut milk, and a thicker, more solid texture. You can buy coconut cream in small cans, perfect for whipping into a dessert cream, spooning into a Pina Colada, or for churning into a coconut ice cream.

It is rich in flavour and texture, so a little goes a long way. If you don’t have a can of coconut cream available, simply refrigerate a can of coconut milk and scoop out the solid cream that separates from the liquid- whip or spoon into a creamy treat!

Apart from curries, what else can coconut milk be used for?

Alongside making incredible Thai and Indian- style curries, coconut milk can be used to transform many other dishes from something simple to something spectacular!

Add a can of coconut milk to homemade soup, for the silkiest bowlful- especially roasted pumpkin or carrot and coriander.

It also makes a delicious base for homemade noodle bowls, or it can be blended with roasted butternut squash and sage for a rich vegan mac ‘n’ cheese sauce.

If you love creating desserts, canned coconut milk makes the most incredible vegan panna cotta when combined with agar flakes and vanilla, or get nostalgic and bake it into a slow-cooked vegan rice pudding.

Thin coconut milk from a carton can be used in place of any plant or cow’s milk, in hot drinks (and it won’t curdle!), bechamel sauce, in porridge. It’s also delicious added to a healthy morning smoothie to make it creamy and filling. 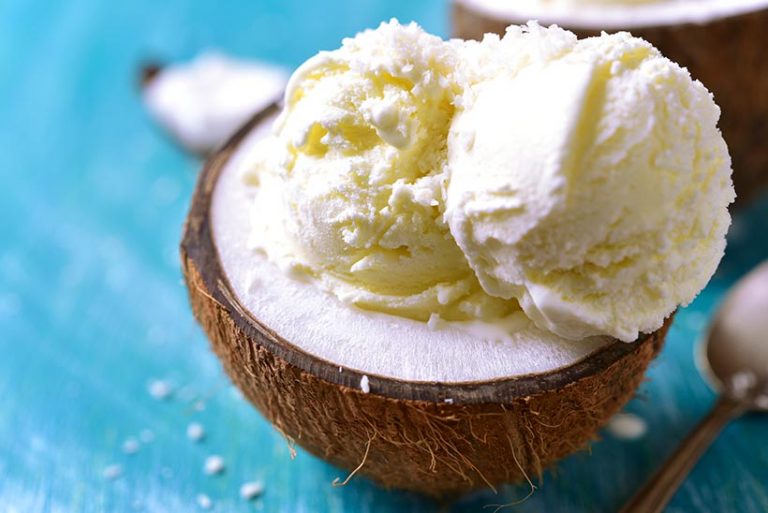 Because of its high fat content, coconut milk makes a perfect base for vegan ice cream. Image credit: Lilechka75 via Getty Images

Is coconut milk good for you?

There has been much research into the benefits of coconut milk (and other coconut products) over recent years, and the many positive health benefits have been recognised1.

Coconut milk is high in high in calories, meaning it can provide sustainable energy for activities throughout the day.

Coconut milk contains medium-chain fatty acids, which are considered a healthier saturated fat due to being oxidised quickly by the liver. Like all fats, they should be considered in moderation, but remain an important part of the diet.

One of the most valuable medium-chain fatty acids in coconut milk is lauric acid, which is thought to be beneficial to skin health. It also has anti-inflammatory and antimicrobial properties to support your body fight infection.

Carton coconut milk is often enriched with added vitamins and minerals, including vitamin B12 and calcium, making it a healthy and balanced choice.

How many calories are there in coconut milk?

100ml of typical coconut milk from the carton offers around 15 calories, compared with 60 calories per 100ml of barista-style oat milk, and 39 calories in 100ml of sweetened soya milk.

Can coconut milk cause side effects?

Coconut milk is unlikely to have significant side effects, unless you are allergic to coconut or are particularly sensitive to tree nuts.

Those on a low-fat or calorie controlled diet should consume canned coconut milk in sensible moderation.

Now you know everything there is to know about the benefits of coconut milk, it’s time to learn about the health benefits of seaweed. 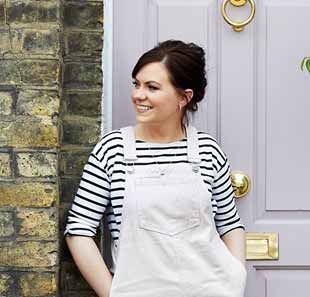 Katy Beskow is a cook, food writer and cookery tutor with a passion for good food and has been vegan for 15 years. Katy is the author of seven best-selling vegan cookbooks, including 15 Minute Vegan, Easy Vegan Bible, Vegan Roasting Pan, and Five Ingredient Vegan.