Almond milk is one of all-time favourites among plant milks but do you know just how good it is for you? Here are 7 benefits of almond milk that will make you ditch dairy.

What are the benefits of almond milk? 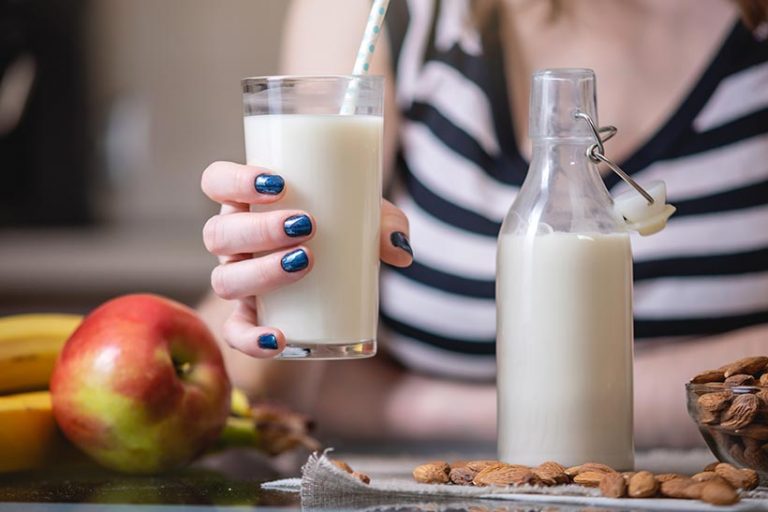 There are many benefits of almond milk as it is low in calories and sugar and is rich in foritifed ingredients. Image credit: Artem via Adobe Stock

What are the calories in almond milk?

In commercially available brands, 100 millilitres of almond milk contain between 14 and 28 calories, which is 59-118 kilojoules – very little!

If you make your own almond milk at home, you’ll probably use more almonds so it will be richer in calories but still a very healthy drink.

What’s the difference between sweetened and unsweetened almond milk?

The only difference is added sugar. Sweetened almond milks have between 2.4 and 3.2 grams of sugar per 100 millilitres, which is a relatively low amount.

It’s certainly less than cow’s milk, which naturally contains around five grams of sugar in each 100 millilitres! 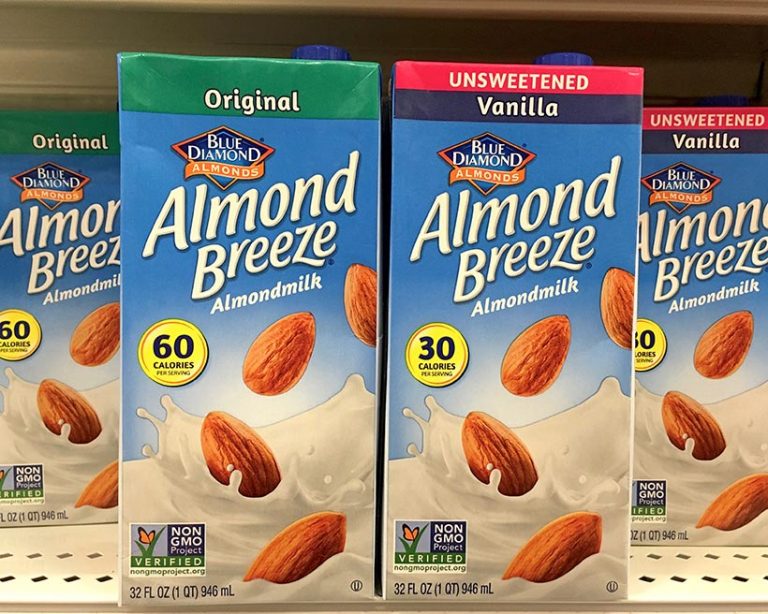 100 millilitres of almond milk contain between 14 and 28 calories, while cow's milk contains around 44 calories per 100ml. Image credit: sheilaf2002 via Adobe Stock

How is barista almond milk different to standard?

Barista milks tend to have a couple more ingredients in them to make them foam and froth better.

In some almond milks, this means more almonds were used, in others, they add some oats, pea protein or a little vegetable oil. In general, barista almond milks are slightly higher in calories than non-barista versions.

Almond milk vs oat milk – which is better?

Both of these milks are a healthy choice, with small amounts of healthy fats, protein and fibre. Unsweetened almond milk has less sugar than oat milk, so is better in that aspect.

However, looking at the environmental impacts, almond milk requires more water than oat milk, so from that point of view, oat milk is better. 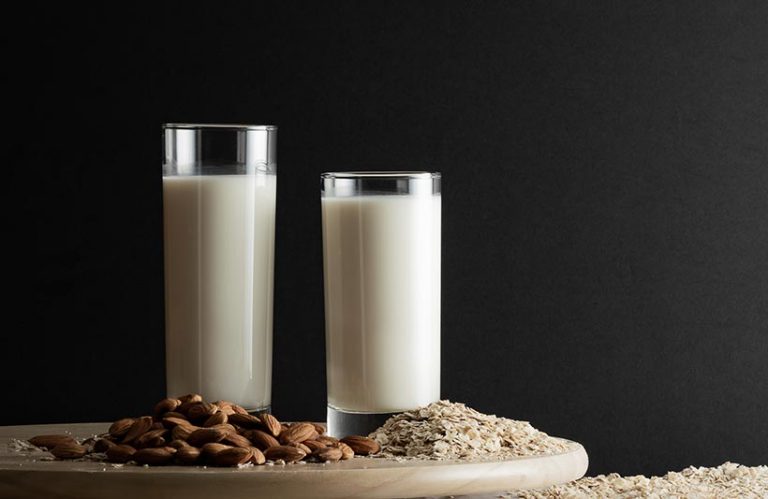 There are substantial differences between almond and cow’s milk and almond milk wins big! Compared with semi-skimmed cow’s milk, it has less fat and almost no saturated fat, while most of cow’s milk fat is saturated – the kind that increases your cholesterol levels and heart disease risk.

Almond milk has less protein than cow’s milk but because all milks contain low amounts of protein, it’s not a nutritional minus.

While cow’s milk contains lactose, a simple sugar that’s absorbed very fast in your body, unsweetened almond milk contains no sugar at all, making it a healthier choice. But most importantly, lactose causes digestive issues to many people who are lactose-intolerant. There’s no such problem with almond milk!

Cow’s milk offers no fibre whatsoever but almond milk always has some. Fibre is important for a healthy digestive system which, in turn, helps our immune system.

And, as if all the above wasn’t enough, almond milk has no hormones whatsoever while cow’s milk naturally contains hormones that may be linked to an increased risk of breast cancer1.

Fortified almond milk contains the same amount of calcium as cow’s milk – 120 milligrams per 100 millilitres – and it also offers vitamins B2, B12 and D, some brands add vitamin E. 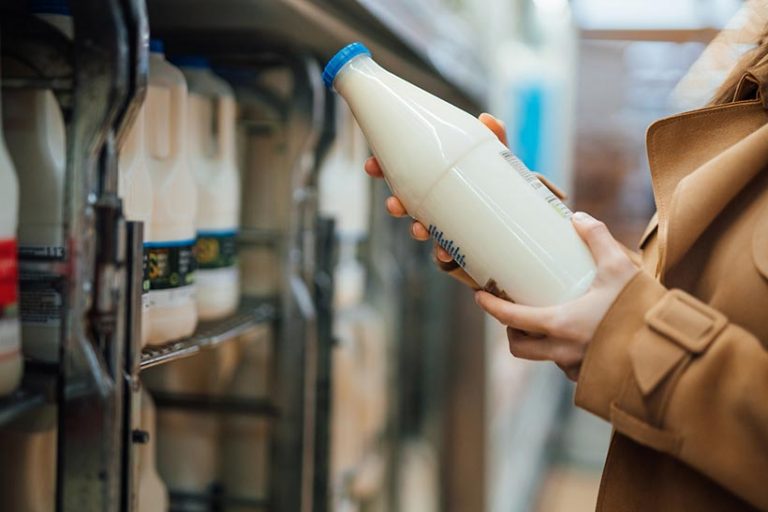 Cow’s milk offers no fibre, contains saturated fat and contains hormones that may be linked to an increased risk of breast cancer. Image credit: Oscar Wong via Getty Images

Yes, it is! Its low calorie content and absence of sugar (unsweetened variety) make almond milk an ideal drink for weight loss.

Is there much protein in almond milk?

However, even those are low amounts – other foods are much richer sources of vegan protein (beans, lentils, chickpeas, tofu, nuts, wholegrains) and milk of any kind is not intended to be a major source.

Does almond milk have calcium?

All fortified almond milks have calcium, 120 milligrams per 100 millilitres. This is a standard amount added to mirror the calcium content of cow’s milk.

Non-fortified (mostly organic) varieties contain only tiny amounts. Almonds as such are an excellent source of vegan calcium – one of the richest among plant foods – but since most commercial almond milks contain only 2-3 per cent almonds, the amount of calcium in the final product is low.

If you want to increase your calcium intake, choose fortified almond milk or snack on a handful of almonds! 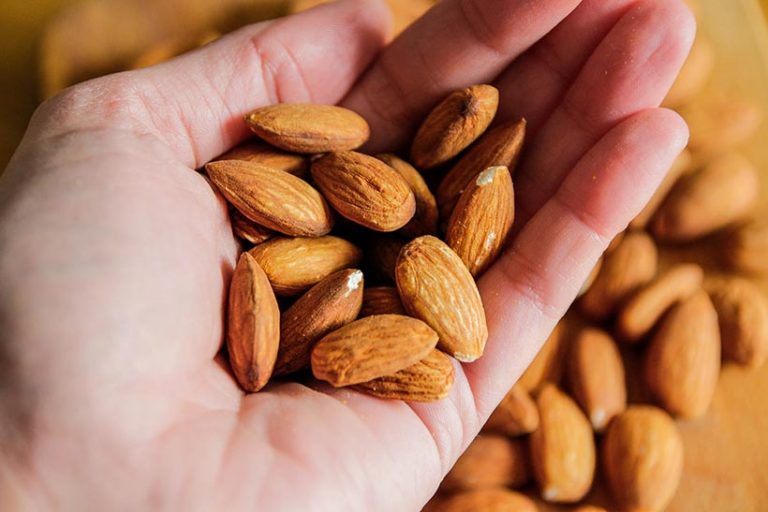 All fortified almond milks have calcium, 120 milligrams per 100 millilitres, and almonds are also an excellent source of calcium. Image credit: Kinga Krzeminska via Getty Images

Yes, almond milk is gluten-free, so the only people who should be careful with it are nut allergy sufferers. The brand Rude Health sell Barista Almond milk that contains oats but even that is gluten-free.

All gluten intolerant or gluten sensitive people can safely consume all almond milks currently on the market.

How to make almond milk

It’s easy to make your own almond milk but you have to have a good blender and a nut milk bag or a cheesecloth. Other than that, you only need almonds and water. It’s best to let almonds soak in water overnight or for a few hours before blending – as they absorb water, they become softer and easier to blend.

Put your almonds and water in a blender and blend until you achieve a smooth and creamy consistency. At this stage, you can also add any extra ingredients if you fancy – a small pinch of salt, some sweetener, vanilla extract, etc.

Next, pour the mixture into a nut milk bag over a bowl (or a pitcher) and strain until all you have left in the cloth is almond pulp. Make sure to squeeze out every last drop of liquid.

Transfer your almond milk into a bottle or another container that can be closed with an airtight lid and store in the fridge. Home-made almond milk keeps for about five days if stored properly.

Of course, you can make your almond milk thinner or thicker by modifying the amount of water used. 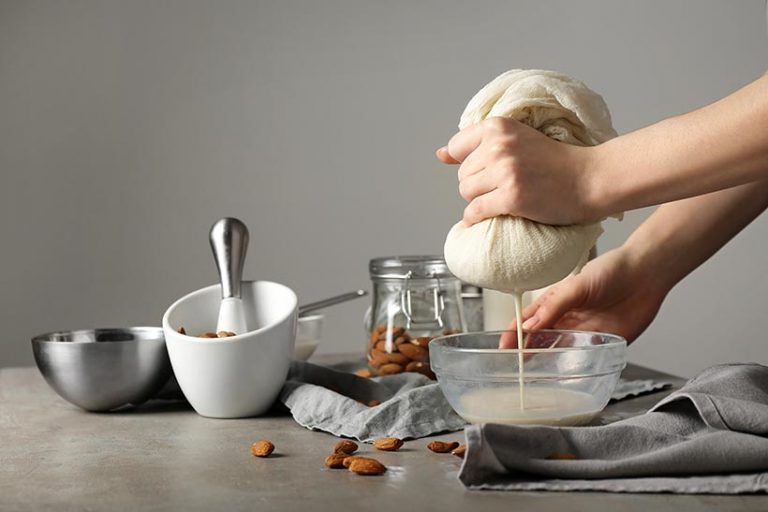 To make your own almond milk, you will need a good blender and a nut milk bag or a cheesecloth. Image credit: Pixel Shot via Adobe Stock

Can you freeze almond milk?

You can freeze almond milk but it won’t be the same again once it’s thawed. Freezing causes separation in the milk and even if you blend it after thawing, the taste and texture will be a little different.

That’s why it’s recommended to only use it as an ingredient in recipes or for making smoothies or shakes – that way you won’t be able to tell the difference. However, if you wanted to drink it straight from a glass or use in tea or coffee, you might be slightly disappointed.

Top tip: Freeze your almond milk in ice cube trays, that way it’ll be super easy to use later and it’ll thaw faster.

Is almond milk a modern drink?

Not at all! There are many records of almond milk being used as a common ingredient across the Christian and Islamic worlds in the Middle Ages. In the 13th century, it was featured in a Baghdadi cookbook, in the 14th century, it was described in an Egyptian cookbook and at the same time a mention of it also appeared in English literature.

Throughout the Middle Ages, almond milk was widely used in Europe during Lent as a replacement for dairy milk but also in recipes for children, presumably because it’s easy on the digestive system. Some traditional Islamic recipes use almond milk as an ingredient for beverages served during Ramadan.

Although modern day almond milk is mass-produced, the basic ingredients stay the same – water and almonds. Simple, delicious and healthy.

More people than ever before are ditching dairy for vegan alternatives like oat milk, but is oat milk good for you?

Check out our article to find out…