Get the lowdown on the top vegan bacon alternatives even meat-eaters will love.

Whether you’re looking to customise a vegan burger, fry it into your chickpea omelette or mix into the ultimate vegan mac and cheese, finding a great alternative to bacon is simple.

Here are some of our favourite ready-made vegan bacon alternatives you can find in UK supermarkets, as well as ideas for making your own at home. 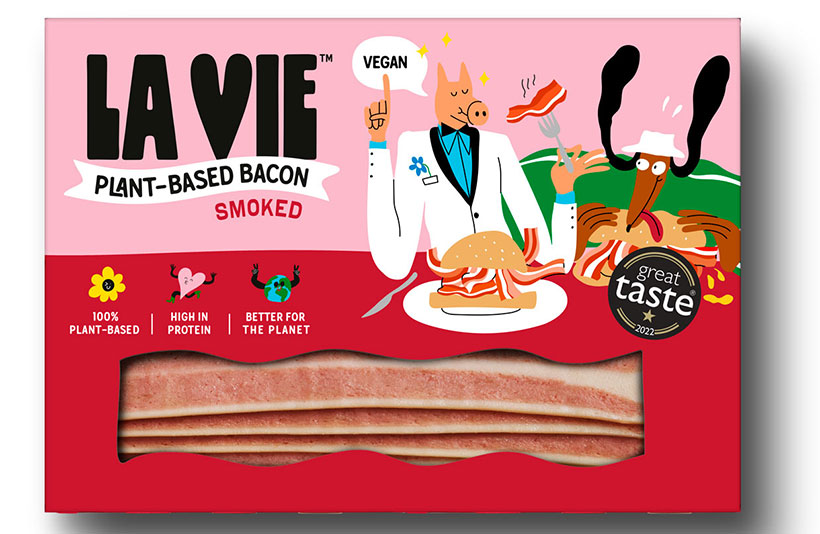 Newcomers to the market La Vie have created the most realistic vegan bacon yet made from soya. It crisps up just like its meaty counterpart and has a delicious smoky flavour. It even looks the part as it has streaks to mimic the fat in pork bacon but has 6 times less saturated fat and 5 times more fibre.

Best for: Replicating the smokey taste and chewy yet crispy texture of pork bacon to perfection.

Texture: La Vie’s vegan bacon is spot on with a superbly crispy texture and just the right amount of chewiness.

Preparation: This vegan bacon cooks just like real bacon, making it a simple switch for anyone wanting to cut meat from their diet. Simply pan-fry until golden brown and crispy with a tablespoon of oil until they start to crisp. Alternatively, you can place them under a pre-heated medium grill until they turn golden and crispy (about 8-10 min).

Use me in: La Vie’s vegan bacon is the perfect alternative and can be used in a huge range of dishes – the only limit is your imagination! They’re particularly good as a vegan sandwich filling for a BLT or as a tasty topping for vegan burgers.

2. THIS Isn’t Bacon Plant Based Rashers 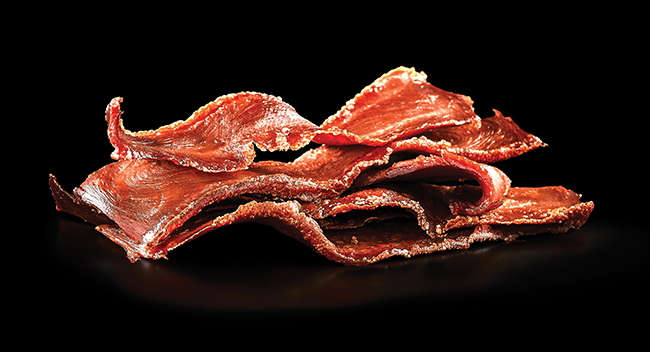 THIS uses a range of vegan protein alternatives including soya and pea to recreate the texture and mouthfeel of traditional bacon. The flavour is provided by vegetable extracts and added vitamin B12.

Best for: Replicating bacon rashers. No, really. These rashers are a smart way of convincing your non-vegan friends that there is life after animal products. The texture, and even the smell, are very similar to traditional bacon.

Texture: The texture is similar to traditional bacon, but with less of a chew.

Preparation: For best results, you’ll want to shallow fry the rashers in oil for 5 minutes before adding into your chosen dish.

Use me in: Best used in a fry-up or traditional breakfast recipe (pancakes and THIS bacon anyone?) to appreciate the true mastery of the plant-based revolution. However, you can also use THIS bacon in any way you would traditionally use bacon. 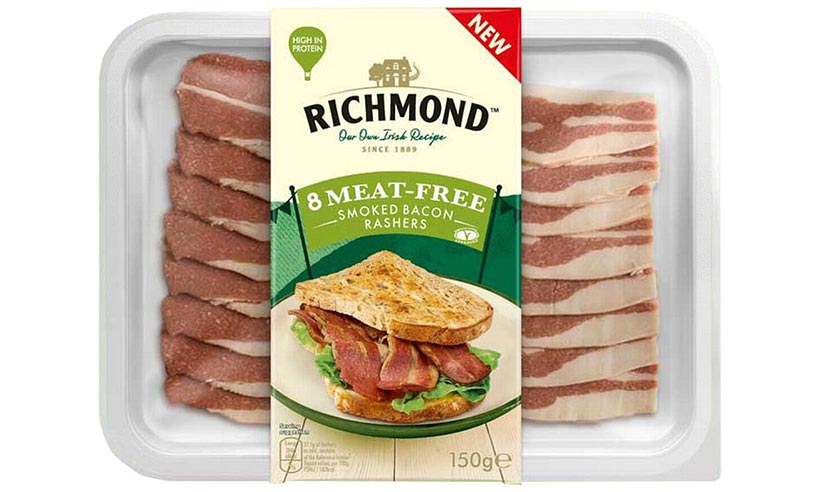 Following on from the huge success of its meat-free sausages, Richmond has added vegan bacon rashers to it’s line-up of vegan products. Made from soya and wheat flour to give them a meaty texture, they’re high in both fibre and protein making them one of the best vegan bacon alternatives.

As they’re infused with a natural smoke flavouring, they’re temptingly smokey and packed with flavour. They’ve even cleverly added softer streaks to the rashers to mimic the fat making them super realistic.

Best for: Because the taste and texture of Richmond’s vegan bacon is such a great substitute for bacon you can use it in anything from sandwiches to fry-ups!

Texture: The texture is softer than traditional bacon and they don’t crisp up to same the degree.

Preparation: Richmond’s meat-free rashers are cooked in a similar manner to bacon. Simply pan fry them in a little pre-heated oil on a medium heat for 3-4 minutes and turn occasionally until they’re well browned and piping hot.

Use me in: Richmond’s vegan bacon rashers are excellent in a vegan BLT as they retain their texture giving the sandwich the same mouth-feel as the classic sandwich.

They’re also fantastic for adding to a vegan burger to give it a smokey flavour.

I know. I was sceptical too, but… it’s pretty damn ingenious. A simple marinade of, yep you guessed it, soya sauce and liquid smoke, with the addition of nutritional yeast, helps transform humble rice paper into crispy bacon-style pieces.

Best for: If you like your bacon crispy, then this recipe is for you. You’ll experience the same traditional mouthfeel as crispy bacon, with the umami salty taste to accompany.

Texture: Super crispy, super smoky, brilliant for topping dishes (not to be used as a bacon alternative in wet recipes).

Preparation: You’ll want to soak your rice paper in water prior to cutting with scissors and marinating in the smoky mixture. Use two rice paper sheets stacked on top on one another to enable texture to build. Bake the rice paper for around 9 minutes to ensure a dehydrated and crisp texture.

Use me in: I would use this bacon alternative in sandwiches and wraps, or crumbled into freshly cooked pasta. 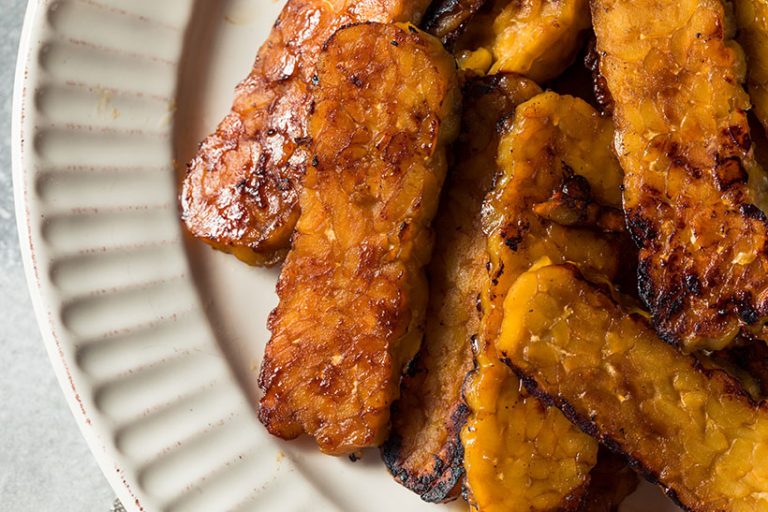 Tempeh is about to take off in a huge way. Tempeh is tofu’s cousin, and is made via the fermentation of whole soya beans. To make the slices, add in some classic smoky flavours using smoked paprika or liquid smoke plus soy sauce, maple syrup, cider vinegar and sea salt.

Best For: These slices are a quick and easy, no-nonsense alternative to bacon, mimicking the flavour whilst maintaining a healthy element of gut-boosting fermentation in the tempeh production process.

Texture: If you’ve had tempeh before you’ll know what to expect. The texture of this product is no different: a little grainy but it will become meatier when you cook it.

Preparation: Firstly, make your marinade using maple syrup, soy sauce, oil and liquid smoke. Cut the tempeh intro strips and allow it to marinate in the sauce for a minimum of 15 minutes to absorb the flavours. Then, simply toss the tempeh strips into a small amount of oil and cook for around 3 minutes on each side, or until they are nicely browned and crispy.

Use Me In: I would use this alternative in everyday sandwich recipes, or for an additional protein hit in your salads.

It’s pretty much what it says on the tin (or skin). Aubergine (or eggplant to our American friends) is a pretty diverse vegetable, with a spongy texture, that’s capable of soaking up whatever flavours you douse it with.

An unbelievably simple recipe, you combine thin slices of aubergine with oil, tamari, vegan Worcester sauce, maple syrup, liquid smoke and some powdered seasoning, including paprika and garlic, to marinate before baking until crispy.

Best for: The flavour of bacon. If you are craving a heady, smoky flavour that you’d expect to savour, this plant-based alternative offers you just that – a simple and delicious hit of salty-smoky flavoured goodness, with no animals harmed.

Texture: Akin to traditional bacon, you can make this aubergine alternative as crispy as you like based on the baking time you choose.

Preparation: This recipe is pretty simple. You can marinate the aubergine overnight, if you have additional time, or just whip up a quick batch and bake with a little extra sauce over the top if you’re in a hurry.

Use me in: I’d use this alternative in a tofu scramble, breakfast burrito, traditional fry-up or a BLT. 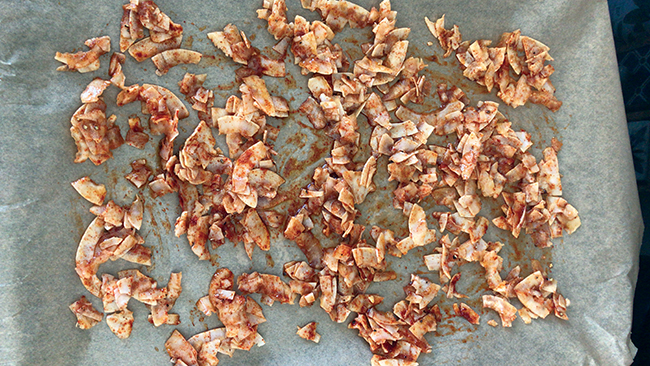 Coconut bacon is a fantastic alternative for those of us who like to get DIY in the kitchen. Made from smoky flavourings, tamari and large coconut flakes, coconut bacon resembles bacon bits when cooked. If you’re lucky enough to be able to source young coconut meat, this also makes a very realistic and delicious meat-free bacon alternative.

Best For: This recipe will recreate the texture of baked bacon and bacon bits, whilst providing the sweetened, caramelised flavour of crispy bacon.

Texture: You will retain the same coconut flake texture as you would expect, with an additional crunch and bite.

Preparation: Using around 8-10 ingredients, you can transform the humble flakes of coconut into a delicious topping. You’ll need to utilise tamari, smoked paprika, liquid smoke and seasoning, baking at a high heat.

Use Me In: Topping salads and hot dishes such as macaroni cheese, sprinkling on top of cheezy pizzas and pimping up your tofu scrambles. 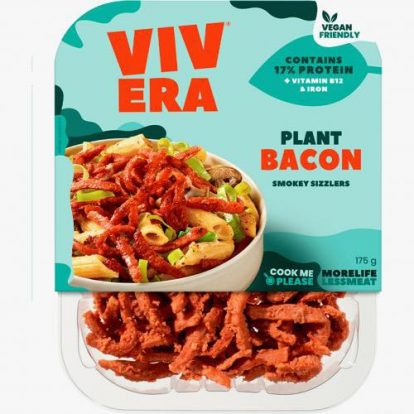 A combination of soy and wheat protein, alongside some thickening agents, herbs and spices, create these unbelievably like-for-like pancetta pieces, which are also enriched with B12 and iron.

Best For: Replicating the texture and mouthfeel of chopped bacon bits, this product is fantastic for quashing any stereotypes of vegan meat alternatives.

Texture: Exceedingly similar to traditional pancetta, these pieces have the familiar meaty bite, and retain their juicy mouthfeel after cooking.

Preparation: You’ll need to fry these pieces in a non-stick pan over a medium heat for 4 minutes. I would recommend using coconut oil for this high heat cooking.

Use Me In: These small pieces of bacon-flavoured wonder are incredible when added to a creamy pasta dish, chickpea omelette, savoury onion bread recipe or sprinkled on the top of your favourite vegan pizza.

Replacing eggs in your diet is as simple as can be!

Let us guide you through the best alternatives with our guide to vegan egg substitutes.