Don't miss out on the exciting new vegan products and menu launches for Veganuary 2023. We've got everything you need to know right here!

Veganuary 2023 is shaping up to be a big one and set to be the biggest yet with record numbers pledging to take part.

In fact, Veganuary has reported that someone is signing up every 2.4 seconds this year. That’s a massive amount of people giving plant-based eating a go this January!

Vegan newbies won’t be disappointed when they find so many amazing plant-based products to try. These days there’s no reason to miss meat!

And for us veteran vegans there are loads of exciting new products and limited edition goodies to try this month.

If you’re not sure which new alternative to buy or where to find that must-have vegan launch, you’ll find all the new Veganuary products and restaurant launches coming in 2023 right here. 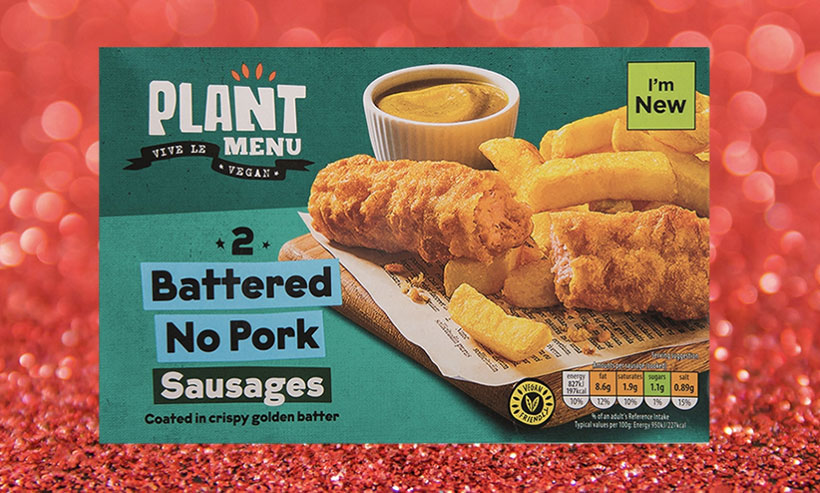 Aldi is kicking off the New Year with a bang with the launch of its biggest-ever range of affordable vegan products. With prices starting at 99p, the new offering is full of wallet-friendly options like steaks, burgers, and nuggets that are great for creating your own takeaway feast at home.

Some of the highlights from the range include Pulled No Pork, No Chicken Wings and Vegan Battered Sausages.

Not only is Aldi launching a huge range of new Veganuary products for easy meals, but it’s also launching its largest vegan cheese range to date with brands like Babybel, Boursin, Applewood Vegan and own-brand products on offer.

Plus, the affordable retailer is debuting a new line of vegan sandwiches, with BLT, duck, and prawn cocktails flavours on offer. 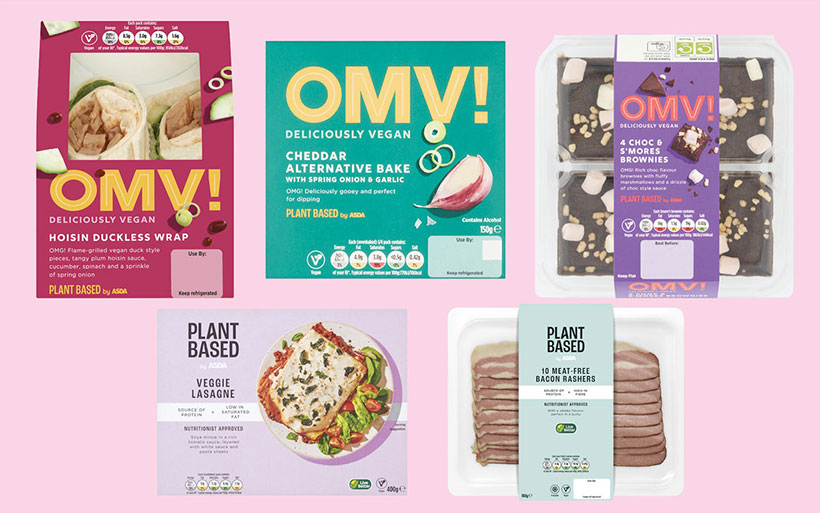 Asda was the first supermarket to launch a dedicated vegan aisle, and the retailer is showing no signs of slowing down when it comes to launching vegan products as its Veganuary products are coming in thick and fast!

Take a trip to the supermarket this year and you’ll find not one but two new vegan brands in store with over 112 vegan products to try, including a No Prawn Sandwich.

The two ranges – named OMV! and Plant Based – are aimed at everyone from ‘seasoned vegans‘ to new vegans taking part in Veganuary 2023.

According to the retailer, its OMV! offers ‘decadent, tasty treats sure to tantalise your tastebuds’, while its Plant Based range offers ‘nutritionally balanced meat-free meals that don’t compromise on flavour’.

Along with its two own-label brands, Asda has also welcomed vegan pizza brand One Planet Pizza, with the first major supermarket listing of its Spicy Peppernomi pizza. 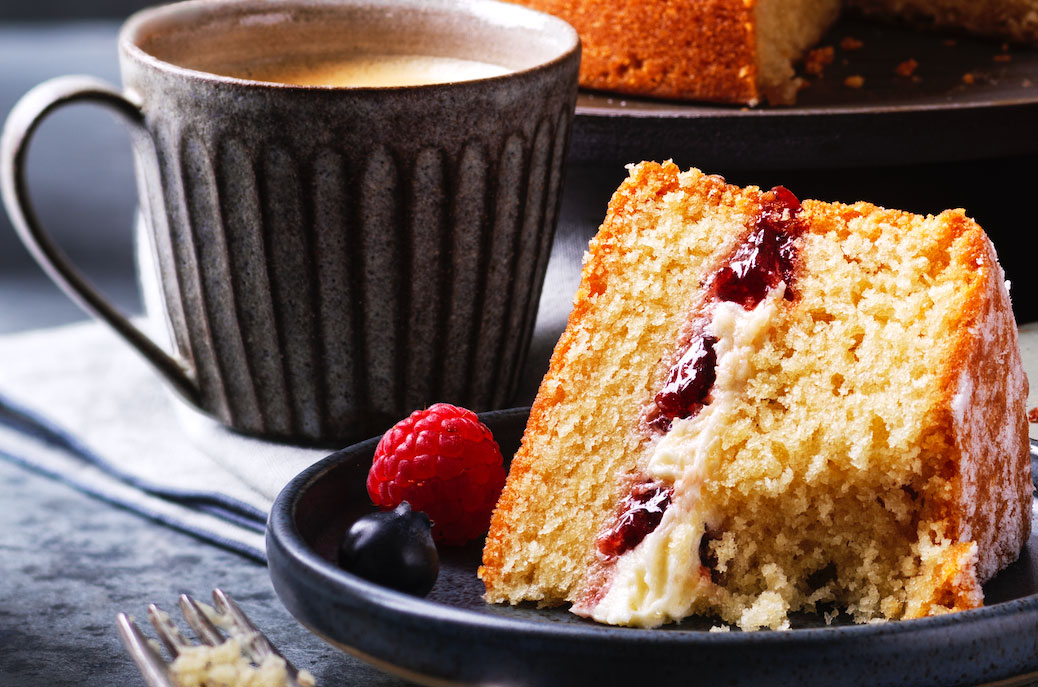 Year after year, our readers vote for M&S’ Plant Kitchen range as their favourite vegan supermarket range, and it’s no surprise why when you take a look at M&S’s new Veganuary launches for 2023.

Vegans can now have their cake and eat it too as a vegan Victoria sponge cake is now available in stores for the very first time.

You can find all the new vegan product launches in M&S stores across the UK now. 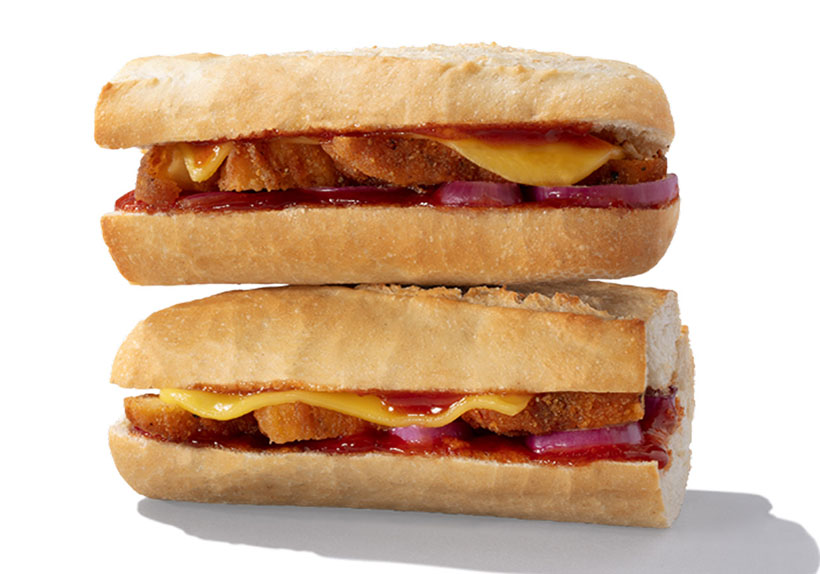 Greggs broke the internet when it launches its vegan sausage roll for Veganuary in 2019, and it’s dropping four new vegan products for us to try this January.

Perfect for lunch on the go, the new products include a Vegan Southern Fried Chicken-Free Baguette and the Vegan Chicken-Free Cajun Roll. 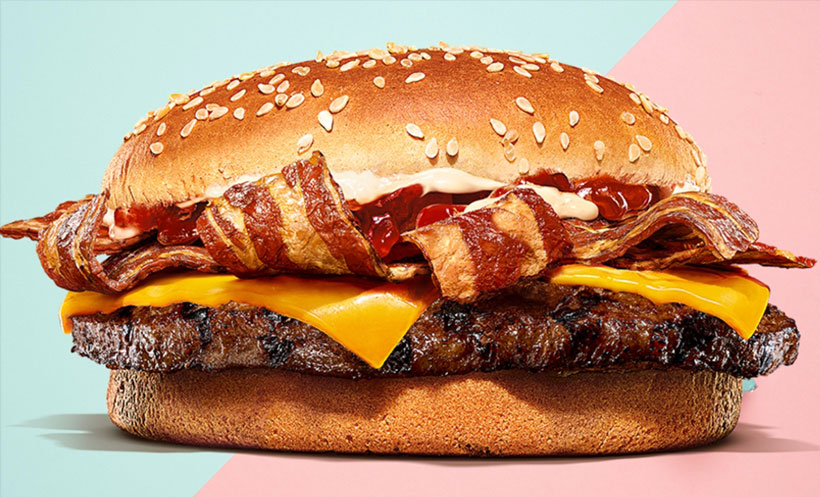 Continuing its mission to make its menu 50% plant-based by 2023, Burger King has teamed up with vegan bacon brand LaVie to launch two new meat-free burgers for Veganuary.

Other sandwiches on offer include the Plant-Based Bakon King, although diners should note that the patty is cooked on the same grill as meat, meaning there is a risk of cross-contamination.

Burger King’s new plant-based burgers are in available now in all 510 of its UK restaurants. 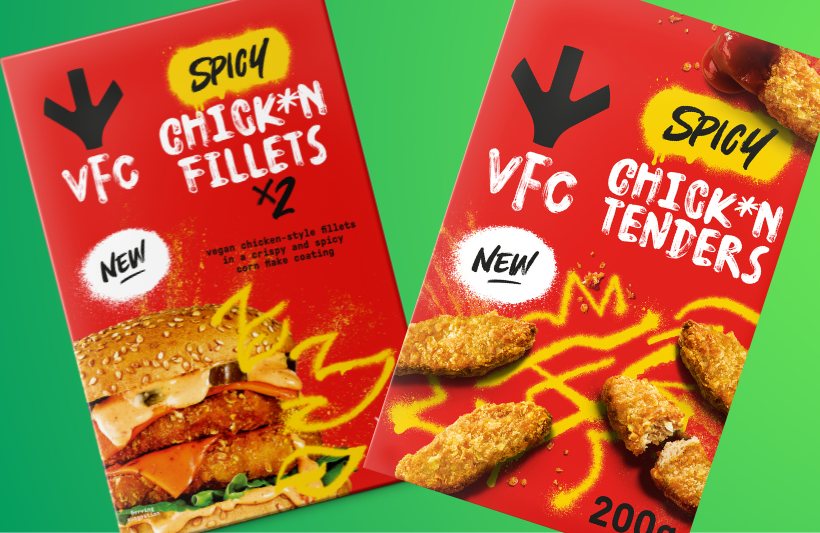 A Veganuary round-up wouldn’t be complete without mentioning VFC – the vegan fried chicken company founded by Veganuary’s own Matthew Glover.

With activism at its heart, VFC is a brand on a mission to save as many chickens as possible and change people’s perception of vegan food.

For Veganuary 2023, VFC has launched a new Spicy range that includes fillets, tenders and popcorn – perfect for wraps, tacos and burgers or just to dip and eat on their own!

The range is low in saturated fat and packed with protein. Find it in Sainsbury’s and Asda. 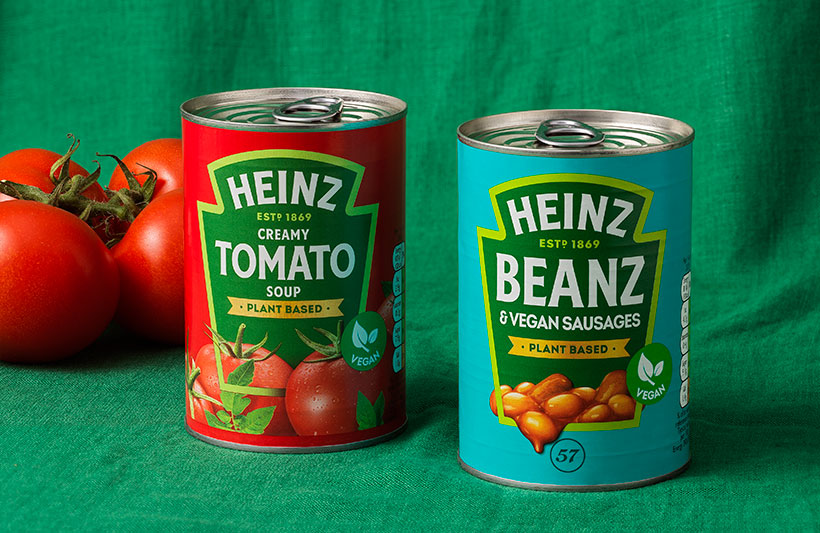 Following years of requests, Heinz has finally released vegan versions of two of its most popular soups: Creamy Tomato and Beanz & Vegan sausages.

The brand apologised to customers for taking so long to release the products after it spent years recipe testing.

Heinz lovers looking for an easy vegan lunch this Veganuary can buy the soups from Ocado and in Sainsbury’s stores.

This mouth-watering vegan sandwich is filled to the brim with vegan steak pieces, teriyaki sauce, vegan cheese and veggies of your choice.

The new sub joins other vegan options available at the outlet, including the Plant Patty, Veggie Delite (when ordered with dairy-free cheese), and Crinkle Wedges. If you’ve got room for dessert, try the Vegan Double Choc Cookie. 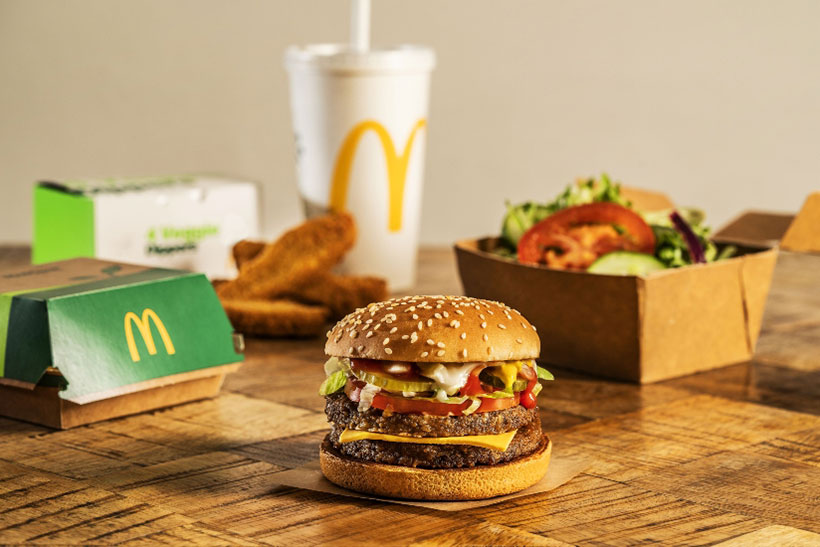 Fast-food giant McDonald’s vegan menu is expanding with the launch of its supersized McPlant burger.

Plus, vegans can dine with peace of mind as the burger is also vegan-certified and cooked separately using dedicated utensils.

The new supersized sandwich is available now in all restaurants across the UK and Ireland from January 4. 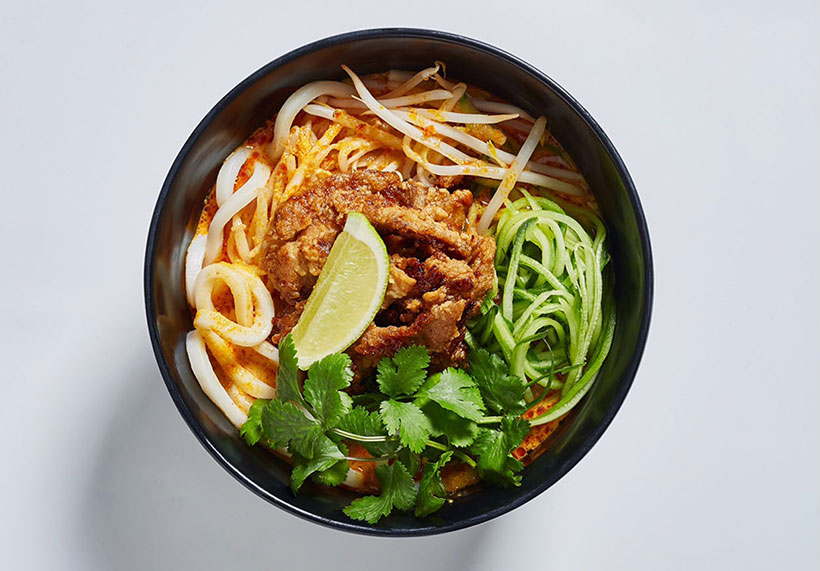 Plus, this dish not only tastes great but the dish will also help feed low-income families in the UK. As part of the launch, wagamama has teamed up with food charity The Bread and Butter Thing to donate one million meals to those struggling amid the cost of living crisis.

The new Vegan ‘Chicken’ Kare Lomen is available to order now on wagamama’s impressive vegan menu, which is is already 50 per cent vegan! 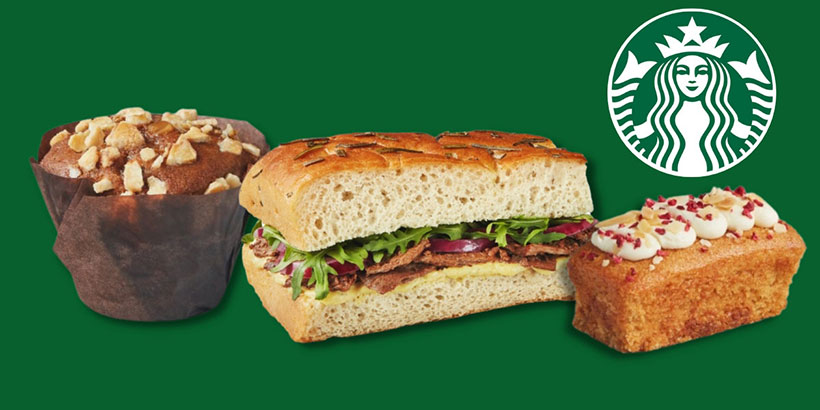 High-street coffee shop chain Starbucks is making it easy to grab a bite on the go this Veganuary with the launch of five new products.

First up is the Plant-Based Breakfast Wrap, which is Starbucks’ take on the full English vegan breakfast experience. It boasts a smoky bean filling, tofu scramble, Lincolnshire-style plant-based sausage coins and spinach in a soft tortilla wrap.

Next is the No’Beef and Red Onion Focaccia, created in collaboration with The Vegetarian Butcher.

Those with a sweet tooth can enjoy the plant-based Raspberry & Almond Mini Loaf and Banana Caramel Muffin, all washed down with the new Caramelised Macadamia Oat Latte. 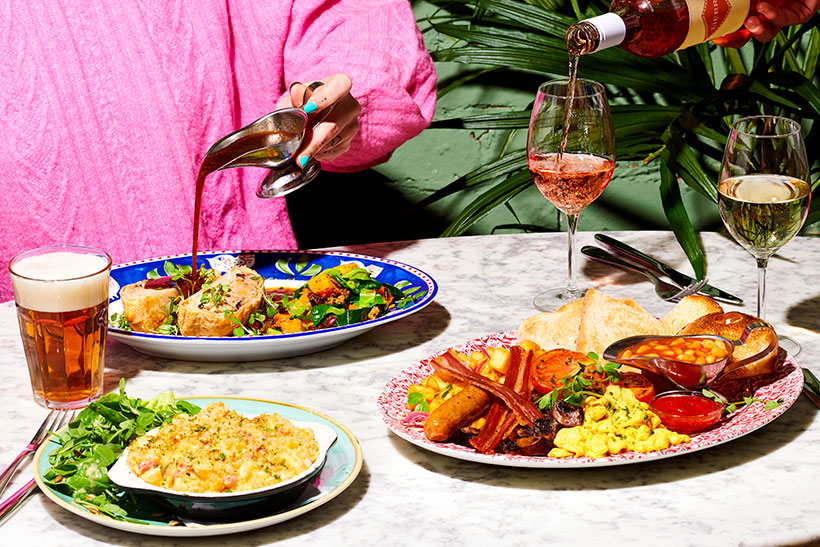 Plant-based meat brand THIS is launching a new product for Veganuary, streaky vegan rashers, and Bill’s is the first restaurant chain to add them to the menu.

If you’re looking for a place to enjoy a vegan brunch this Veganuary, look no further than Bill’s.

On the Veganuary menu are three new vegan dishes, including the THIS Plant Plate (from £13.50). This epic brunch comes with all the trimmings, including THIS Isn’t Streaky Bacon Rashers, vegan sausages and scrambled OGGS.

There’s also the THIS Isn’t Bacon Mac & Cheese (from £11.85) with vegan bacon lardons folded through a a smokey vegan cheese sauce.

Finally, you’ll also find the THIS Isn’t Chicken & Bacon Wellington (from £14.95) on the menu. This meatless Wellington is made from THIS Isn’t chicken and THIS Isn’t Bacon Lardons layered with apricot stuffing & wrapped in puff pastry. 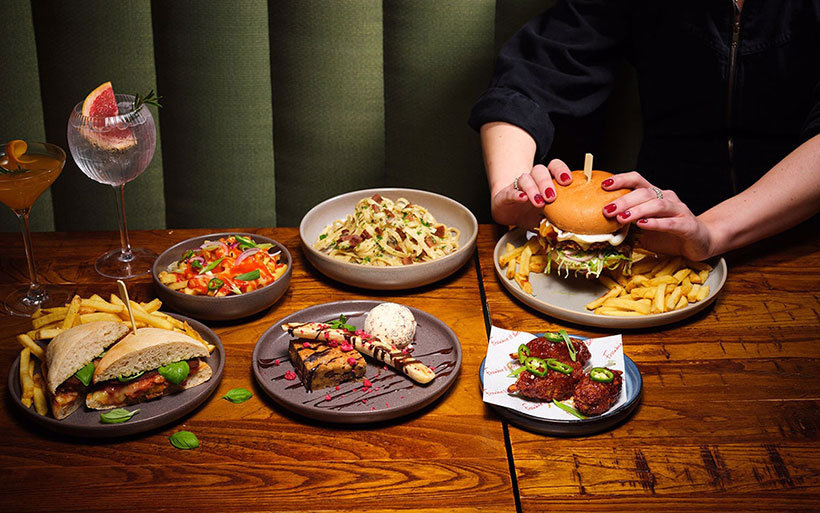 In celebration of Veganuary, Frankie & Benny’s has teamed up with leading plant-based brands THIS, Biff’s and OGGS to launch its ‘big vegan takeover’.

Keen to show that ‘comfort food and vegan dishes aren’t mutually exclusive’, the Italian-American restaurant chain has chosen some of its most loved dishes, and challenged its partners to put a new, plant-based spin on them.

This Veganuary customers will find an array of dishes made using the brand’s products, including OGGS Vegan Carbonara, Biff’s Parmigiana Hoagie, and a BBQ Spicy Banana Blossom Burger. 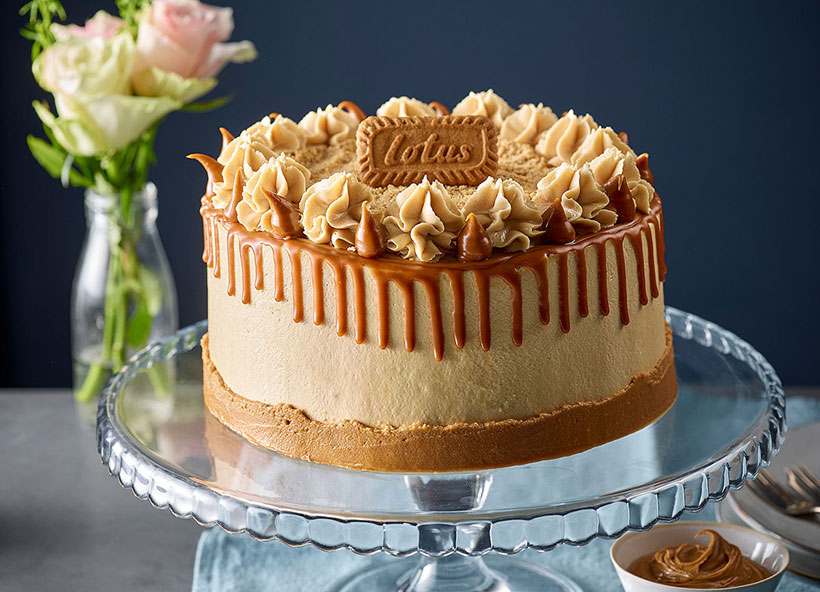 For those who can’t get enough of Biscoff spread, there’s the indulgent Lotus Biscoff Cake with cream sandwiched between three layers of soft vanilla sponge.

Both cakes are available to order online for nationwide delivery now in two sizes – six-inch (12 portions) or eight-inch (14 portions). 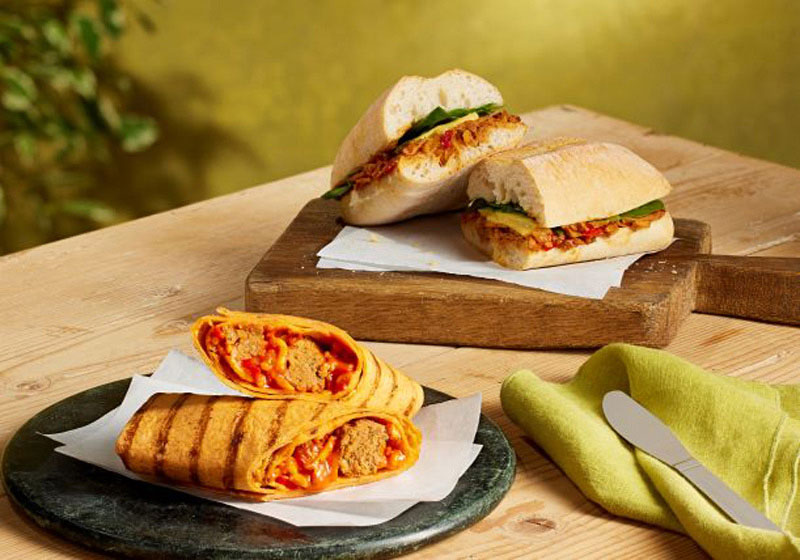 Other sweet snacks include its vegan Heart Emoji Gingerbread biscuit, and Iced Shortcake Biscuit, which are the perfect accompaniment to a cup of coffee. 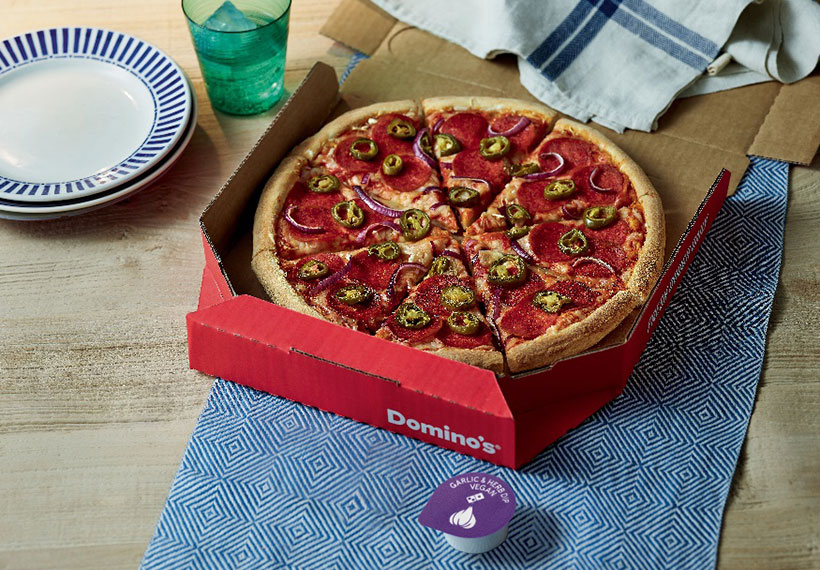 Takeaway pizza chain is turning up the heat this Veganuary with its new menu addition – the Vegan American Hot.

This fiery pizza is one for those who like it spicy as it features spicy specially created pepperoni from The Vegetarian Butcher and jalapeños. Enjoy it with a side of Domino’s vegan Garlic & Herb dip for a vegan pizza party in the comfort of your own home.

The Vegan American Hot is available to order through the Domino’s app and in Domino’s stores now and is priced from £17.99 for a Large Italian Crust Pizza. 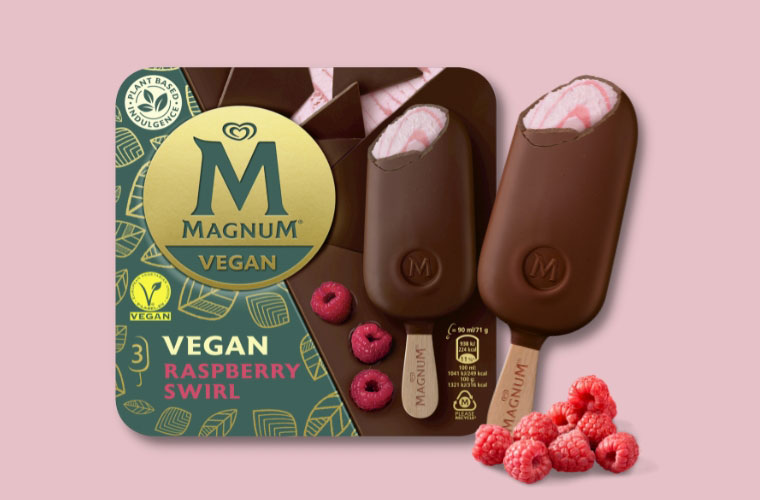 Magnum is expanding its vegan range this Veganuary with its new Magnum Vegan Raspberry Swirl flavour.

The new Magnum Vegan is available in standard size packs of 3 for £3.99 and as single sticks for £2.00. Head to your nearest supermarket to find them now! 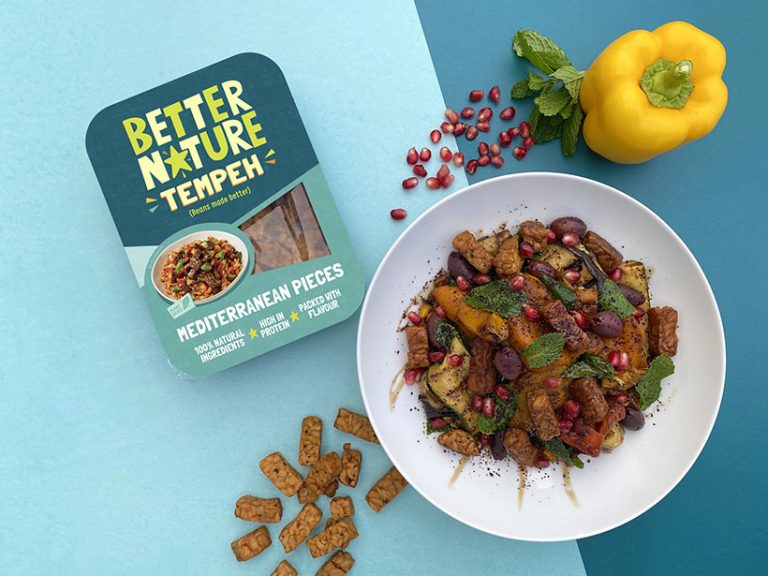 Looking for an easy way to pack more protein into your meals? Better Nature has launched three delicious new varieties of Tempeh Pieces to up your meal game in minutes.

Made from tempeh and a carefully-selected blend of oils and spices, the new Marinated Tempeh Pieces are available in Mediterranean, Curry and BBQ flavours.

The Tempeh Pieces are a great source of  fibre, complex carbohydrates and count as 1 of your 5-a-day, so make a great addition to vegan curries, stir-fries, tacos, Buddha bowls and more!

Feeling hungry? Get inspired in the kitchen this January with our favourite Veganuary recipes.