Higgidy to launch vegan quiches and no-pork pies for Veganuary

Higgidy is jumping straight into Veganuary 2021 with the launch of two vegan quiches and vegan pork pies in supermarkets from the 30th December.

The new vegan quiches feature two flavours: Spinach and Roasted Tomato, and Porcini Mushroom and Spinach. As quiche relies heavily on eggs and dairy to create its signature texture and taste, vegan versions are notoriously tricky. However, Higgidy claims to have cracked it (pardon the pun), after “years of hard work, taste tests and trials”.

Their quiches use a combination of oat and coconut milk in addition to other plant-based ingredients to achieve its egg-like consistency. Founder Camilla Stephens said, “The benchmark for us was that it had to be as good as eating something that isn’t vegan.” 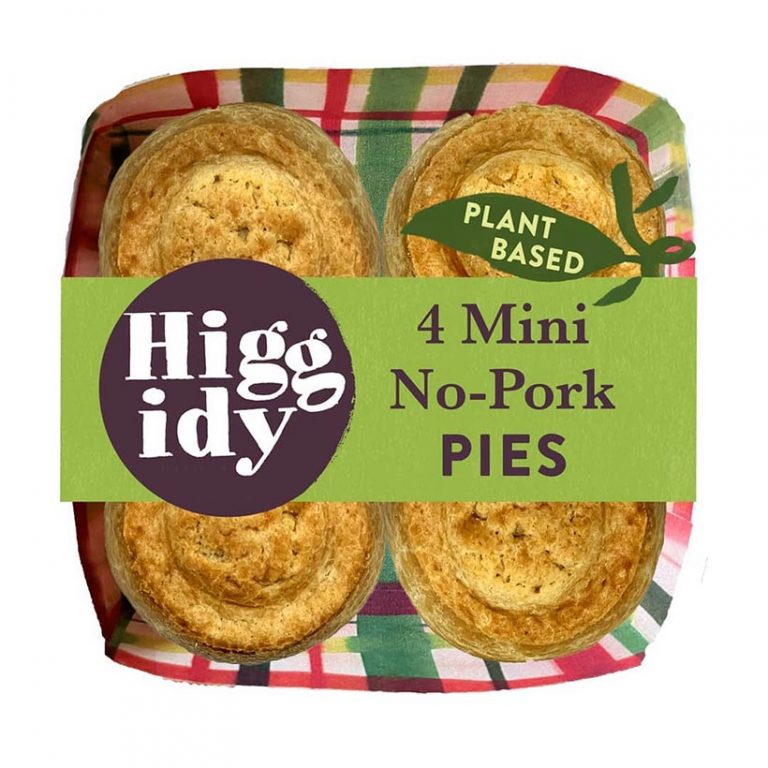 Higgidy has swapped pigs for veg in their new vegan No-Pork Pies. Packed with red peppers, tomato and lentils instead of a meat alternative, they truly champion vegetables in all their glory. This move is in keeping with the brand’s ethos of putting veg at the centre of the plate, and we’re certainly here for it.

These new ‘pork’ pies seem to be following a growing trend, with the launch of vegan porkless pies in both Morrisons and Asda earlier this year. Consumers are definitely eating less meat, instead increasingly turning to meat alternatives in the shape of familiar products.

While Higgidy remains largely non-vegan, the brand has recently branched into more plant-based products. In their range, you can find two vegan pies: Creamy Mushroom and Kale, and Aubergine and Spinach Masala, in addition to their new Miso Mushroom Rolls.

The brand also recently rolled out four new ready to bake meals, two of which are vegan. One is a creamy Mac and Super Greens bake, while the other is a rich Roasted Aubergine and Pepper Gratin.

The new vegan products launch in Waitrose on the 30th December, followed by Boots and Sainsbury’s on 1st and 3rd January. Prices range from £2.60-£4.25.

Ever wondered what our future would look like if plant-based farming became widespread?
Read our article to find out!