Hot on the heels of its launch at Asda stores, we couldn't wait to review the new vegan white chocolate bar from Galaxy - and this is what we thought...

Vegan chocolate bars have been hitting the shelves in droves in recent years with 1 in 5 new chocolate launches being vegan-friendly.

But while vegan milk chocolate bars and dark chocolate treats have flooded the market, options for vegan white chocolate are still limited.

Before going vegan, I was a full-fledged member of the white chocolate fan club. As someone with a super-sweet tooth, I just couldn’t get enough of its sugary flavour and creamy texture.

In fact, when people ask me what I miss the most after nearly 10 years of being vegan, white chocolate is always my answer.

While there are a number of options available, I’m still yet to find one that hits the spot in quite the same way.

I often find that without milk powder they have a waxy texture and an overly sweet taste that’s more reminiscent of caramel than white chocolate.

To me, white chocolate should be heavy on the vanilla with a smooth texture that melts in the mouth.

So you can imagine my delight when Galaxy announced the launch of its first vegan white chocolate bar. Made from rich cocoa butter blended with a creamy almond paste, it claims to be a “heavenly vegan treat with a silky smooth texture.”

I was lucky enough to get my hands on a bar of Galaxy’s Smooth White Vegan hot on the heels of its launch at Asda this week, so let’s see whether it lives up to that claim! 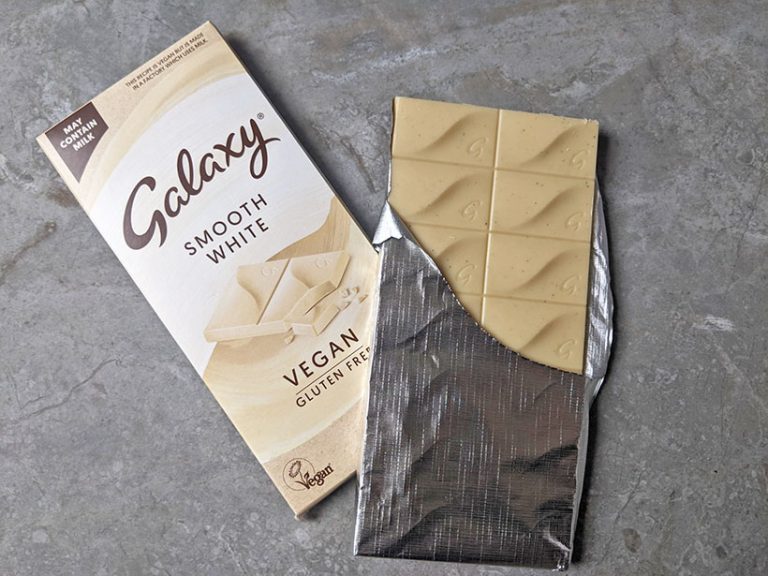 Upon opening the packet, the first thing I noticed was the nutty smell of the bar mixed with the cocoa.

If you’ve tried a dairy-free white choccie bar before you’ll know exactly what I mean as they typically swap milk powder for ground nuts to add creaminess.

I was also delighted to see that the bar is generously studded with real vanilla bean seeds which really help give it that genuine vanilla flavour that others lack.

However, I did find that the nutty flavour from the almonds to be stronger than the vanilla itself. 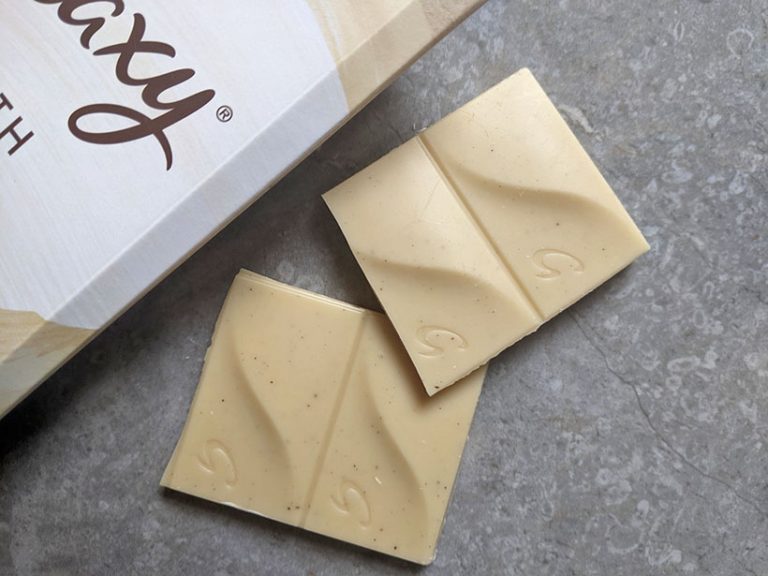 One thing I really enjoyed about this bar was its texture. There’s no waxy residue that coats your teeth and it really does melt beautifully just like a dairy chocolate bar.

It certainly gets top marks from me on the texture front which in my opinion is key to a good vegan chocolate bar.

People often dislike white chocolate because they find it too sweet, but that certainly isn’t the case (for me at least!) with Galaxy’s vegan version.

It’s definitely sweet, but not enough to get your teeth tingling! It’s like the posh, grown-up version of white chocolate.

I ate the entire bar (entirely for research purposes of course!) and can honestly say that with each square I enjoyed the bar more and more. It’s not quite a spot-on replacement for white chocolate, but it’s absolutely delicious in its own right.

Would I buy it again? Yes absolutely! It definitely satisfies my craving for white chocolate and gets bonus points for its plastic-free packaging.

But at twice the price of Aldi’s Moser Roth Vegan Blonde Cocoa which is comparable in taste and texture, it would be an occasional treat.

Galaxy Vegan Smooth White is available exclusively at ASDA priced at £3 per bar.

Have you got a sweet tooth?

Check out our pick of the best vegan chocolate bars in the UK!