With their soft, pillowy texture and sweet taste, there’s a good reason why marshmallows have been enjoyed since as early as 2000 BC.

But, with many people moving away from consuming animal products and opting for plant-based ones instead, you might be wondering what options there are when it comes to great vegan marshmallows.

In this article, we’ll explain why most marshmallows aren’t vegan, how to check which ones are, and share our favourite vegetarian marshmallows with you.

Plus, we’ve made sure to do a ‘toast test’ to find out the best vegan marshmallows for toasting and for a vegan hot chocolate topping.

One of the main ingredients used to make traditional marshmallows is gelatine. This is used to give marshmallows their spongey, chewy texture, but because gelatine is derived from animal bones, marshmallows that include it aren’t vegan.

However, many manufacturers are now replacing gelatine with plant-based ingredients such as carrageenan to make vegan marshmallows.

Carrageenan is derived from seaweed and is used as an additive in food to emulsify and thicken it. It melts in boiling water to form a gel and helps give vegan marshmallows that signature puffy texture.

Alternatively, some manufacturers opt for agar to replace gelatine in vegan marshmallows. Like carrageenan, agar is also derived from seaweed and helps thicken foods and give them a jelly-like texture making it the perfect replacement for gelatine.

Best vegan marshmallows to buy in the UK

In order to find out which are the best vegan marshmallows in the UK, I decided to put them to the test!

To me, a good marshmallow should toast beautifully and form a crunchy, sugary coating when roasted over a fire. They should also melt slightly under the heat so the centre gets deliciously gooey.

I tested a wide selection by toasting them with a kitchen blowtorch to see which ones are the best vegan marshmallows for bonfires.

But marshmallows aren’t just for toasting, they’re also great in a hot chocolate. That’s why I also experimented with these vegetarian marshmallows to find the perfect ones to top your mug of cocoa with. It’s a hard job, but someone’s got to do it right?! 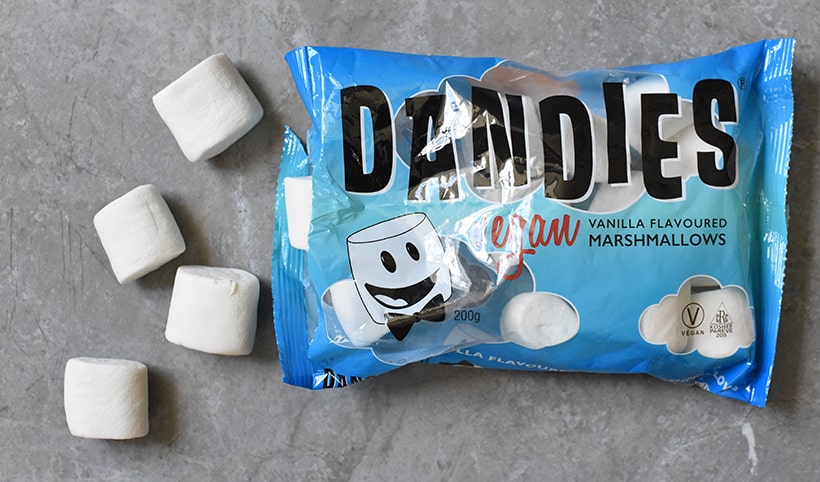 I love Dandies’ gelatine-free marshmallows. In fact, I love them so much I served them at my wedding to toast in the bonfire and none of my guests even knew they were vegan!

They’re large, perfectly soft and pillowy, and have a subtle vanilla flavour that makes them oh-so moreish. Plus, not only are they vegan, but they’re also gluten-free.

Dandies’ vegan marshmallows are great for toasting. They crisp up as soon as the fire hits them, caramelising beautifully. 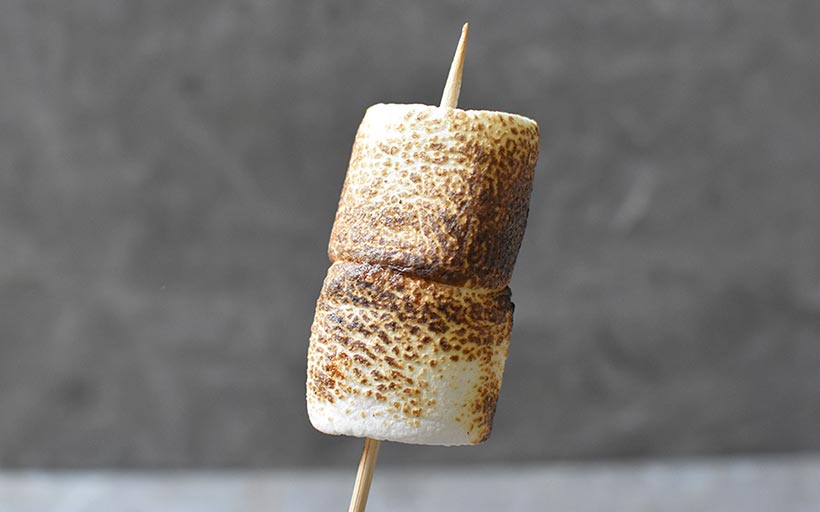 One thing to note is they don’t get as gooey all the way through as they have a slightly firmer, more substantial texture.

However, this does help you to avoid the inevitable mouth burns from molten marshmallow goo. It also makes them perfect for S’mores as they hold their shape well when squished between biscuits.

You can find Dandies at Holland & Barrett and Asda priced at £2.49. 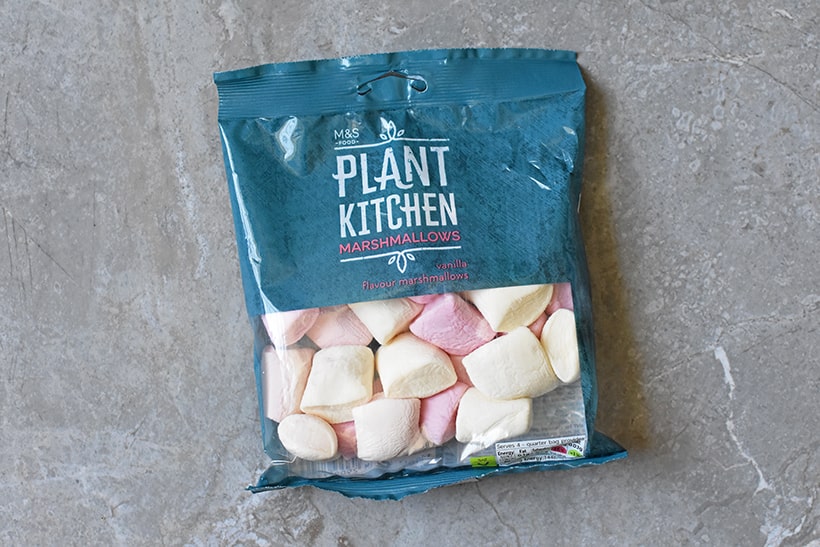 I jumped for joy when I heard that M&S were launching veggie marshmallows. Before these vegan marshmallows hit the shelves it was difficult to find affordable options on the high street that were a decent size as most options were mini marshmallows.

Like the rest of the Plant Kitchen range, they certainly don’t disappoint! In fact, they’re indistinguishable from traditional marshmallows in terms of both taste and texture.

I also love the fact that they went with the classic pink and white colours! 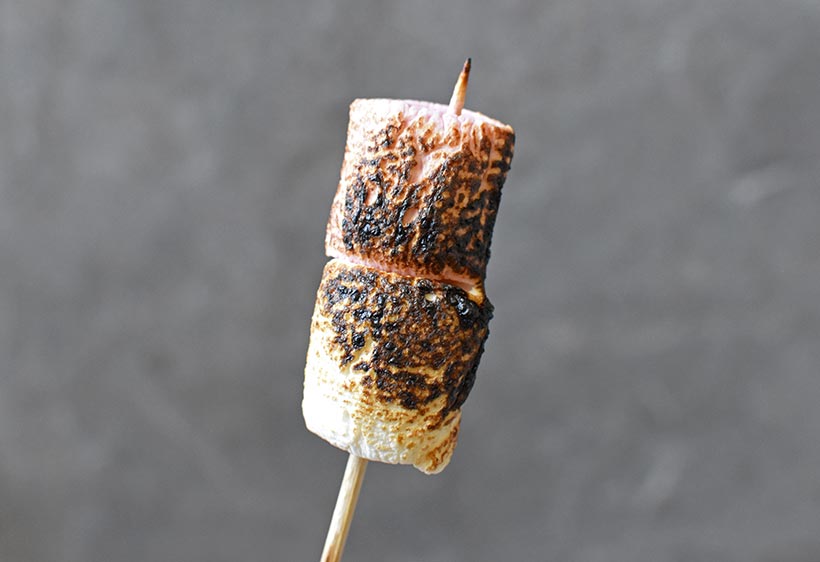 Although they’re about half the size of Dandies, these are the best vegan marshmallows for toasting in my opinion.

They form a super crispy, sugary outer layer, but also because they’re smaller in size they get deliciously gooey and melty all the way to the centre.

M&S Plant Kitchen marshmallows are available in store priced at £1.60. 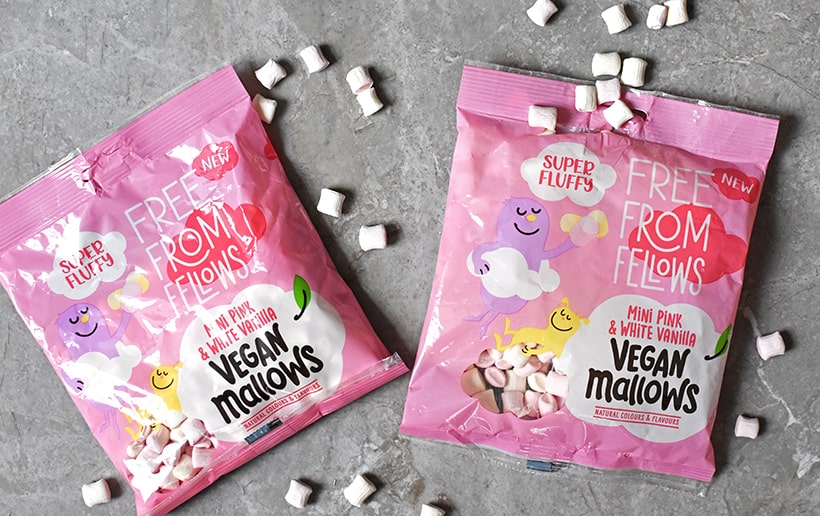 If you ask me, hot chocolate isn’t the same without a dollop of dairy-free whipped cream and some marshmallows.

Luckily, Free From Fellows’ vegan mini marshmallows are the perfect topping for a vegan hot chocolate. They’re fluffy, puffy and have that classic pink and white colouring. 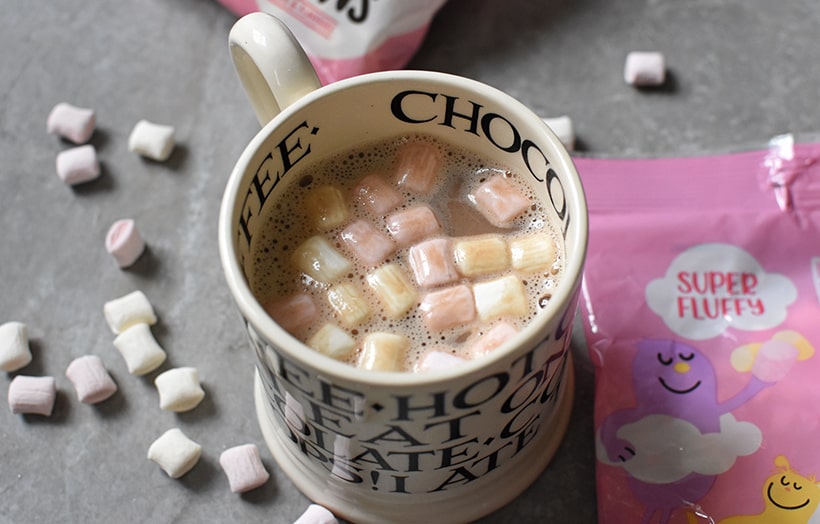 They’re also impossible to stop shovelling from the bag into your mouth, speaking from experience!

But Free From Fellows don’t just sell mini mallows, they also offer larger sizes that toast wonderfully in strawberry and vanilla flavours too which are equally yummy.

Got a sweet tooth? Don’t miss these vegan sweet treats! 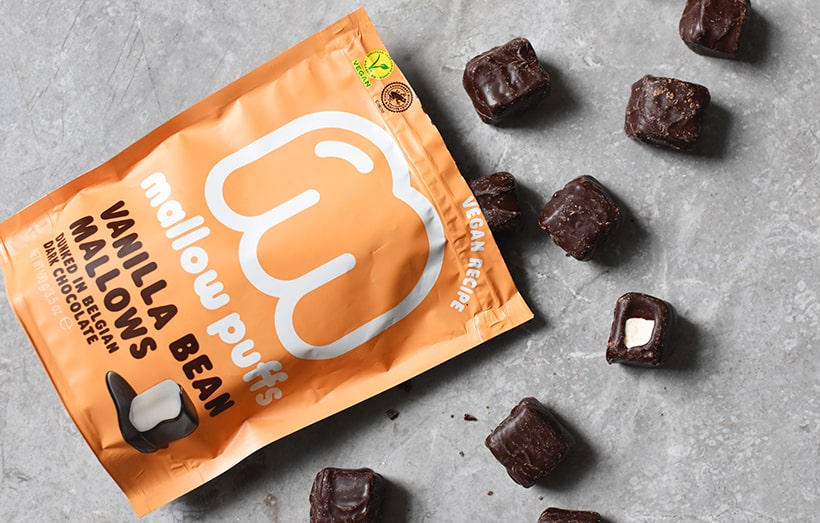 If you love snacking on marshmallows but aren’t interested in toasting them or dunking them in hot drinks, try Mallow Puffs!

These chocolate-coated vegan marshmallows are such a treat with the lightest, fluffiest marshmallows enrobed in silky dark Belgian chocolate.

Marshmallows can be a little sickly sweet for some, but the combination of sweet mallow and super-rich chocolate makes these absolutely irresistible.

They also offer a salted caramel version for those who just can’t get enough of that sweet and salty combination. 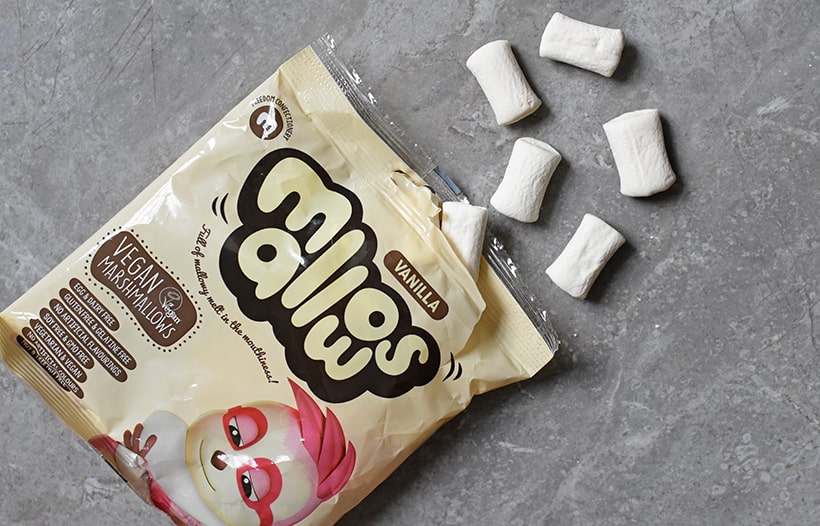 Freedom has been ensuring everyone, no matter their dietary requirements, can enjoy the delights of a good marshmallow for nearly 10 years.

So it’s safe to say they know a thing or two about how to make a good vegetarian marshmallow!

They have a tasty range of varieties to choose from, including vanilla or strawberry flavours, mini, and even BBQ size.

Not to mention their superb chocolate-covered marshmallow bars and bites which are every bit as delectable as they sound!

Freedom’s mallows are soy-free, gluten-free, and free from artificial flavourings and colourings making them a great option for kids and those with food allergies.

I enjoyed the generous size of these not-so mini marshmallows and found they did melt in hot chocolate. However, they did have a mild synthetic aftertaste that other comparable products didn’t have.

You can find Freedom Confectionary’s allergy-friendly marshmallows online via their website. 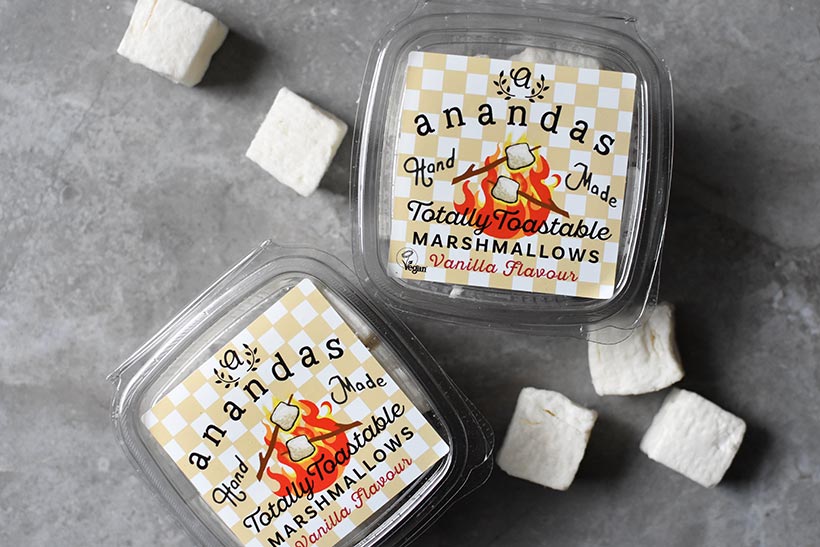 Marshmallows were one of the things I missed the most when I went vegan, so Anandas’ veggie mallows will always have a special place in my heart for being the OG gelatine free marshmallow maker in the UK.

While they are best known for their epic vegan Round Up biscuits (a vegan take on Wagon Wheels), they also have a huge range of artisan vegan marshmallows in a delicious array of flavours.

They regularly offer new seasonal flavours like the unusual (but incredible) Blackcurrant & Liquorice Halloween special. However, my personal favourite is the supremely tasty Toasted Coconut flavour.

While their flavoured marshmallows are better for snacking, Anandas has a Totally Toastable marshmallow designed for toasting.

Anandas’ gelatine-free marshmallows are different to others available on the market as they use agar and locust bean gum as gelling agents. As a result, their marshmallows are much softer with a slightly flakey yet pillowy texture.

The first thing I noticed when I opened the box was the strong caramel scent of the mallows. Although the mallows are vanilla flavour, they tasted more like rich toffee when toasted with a slightly synthetic aftertaste. 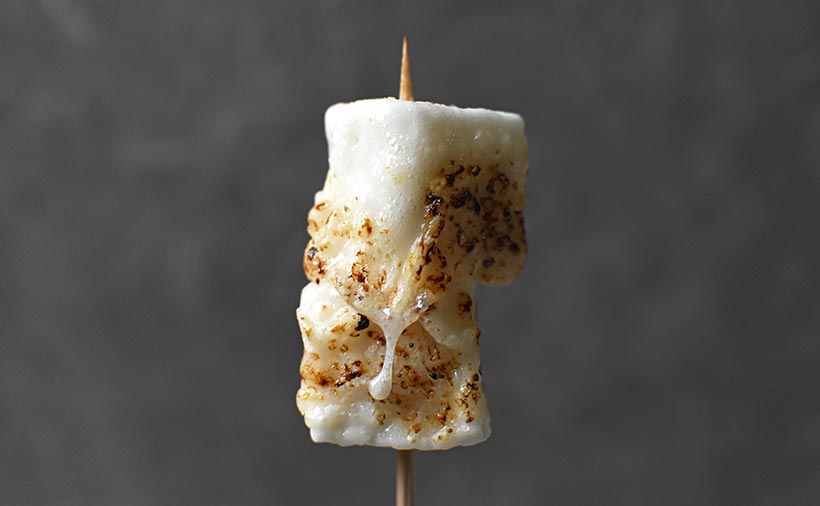 Sadly, I found that these didn’t toast as well as others I tried. They took longer to toast than the other marshmallows I tested, requiring a sustained blast of heat from the blowtorch.

Furthermore, the outer layer started to melt and drip under the heat so they didn’t go gooey in the centre.

Get your hands on Anandas’ range of sweet treats via their website and at independent retailers across the country.

Check out our pick of the most delicious vegan sweets!