A traditional Welsh pub, The Queen Inn, has gone 100% vegan after its Veganuary menu trial proved to be a roaring success with the pub fully booked all month.

The pub, which is based in Cwmbran South Wales, decided to run a trial throughout Veganuary which saw meat and dairy knocked off the menu and replaced with plant-based alternatives for one month.

However, the trial was so well received that owners Jane, Gareth and son Ryan have moved to a permanent vegan menu, just halfway through Veganuary.

“We’ve been fully booked for an entire month. The only dates we end up having available are cancellations,” reported Ryan.

This kind of response came as a huge surprise to the family, as customers are used to visiting for their meat and two veg fix.

Now, patrons can tuck into vegan delights such as ‘Chicken’ Kiev and chips, ‘Chicken’ and ‘Bacon’ Carbonara, and an epic Vegan Burger.

“Some people are sceptical about it,” Ryan explained. “Some wonder why we’re doing it. For many, meat is a staple of their diet and that’s understandable. Some get uptight but people are interested and I enjoy talking about it to customers.

“I know one person commented on WalesOnline saying we wouldn’t last until February. So that prediction went well.

“My favourite type of customers are the interested non-vegans, who are surprised and blown away by what we’re doing.

“It is amazing seeing how many people have opened up to the idea and changed their minds on it.” 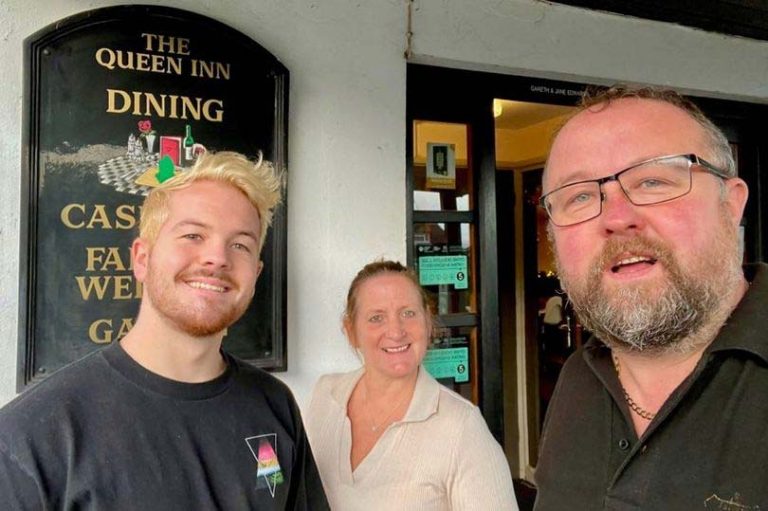 While the pub itself has only just gone vegan, Ryan and mum Jane have been vegan themselves for over a year now.

Ryan explained to WalesOnline, “We’ve seen the incredible effect a vegan diet can have on your health. I ran my first marathon in October in three hours and 45 minutes. I would never have dreamt of doing that last year!”

And we have a sneaky suspicion that dad Gareth isn’t far off, as the Veganuary trial was his idea!

The Queen Inn isn’t the only establishment to go fully vegan recently.

London fine-dining experience Gauthier also made the switch in 2021, much to the outrage of some regular customers who visited for the meat and dairy heavy French cuisine.

Owner and Michelin-star chef Alexis Gauthier admitted that he was expecting to lose loyal customers when he announced the switch.

Speaking to The Telegraph last year, he explained: “It’s been a big problem, I was aware that I had a fight on my hands, especially as many customers have been eating my food since I was at Roussillon. I understand people feel let down.

“No one says I don’t agree with you, they respect it but – equally – they want to eat meat and fish when they go out. I get that, but I say, trust me, what we cook is as good as that. Some people are up for it and some aren’t.”

However, Gauthier has gone from strength to strength since going fully vegan, and owner Alexis even opened another plant-based dining space in London called 123Vegan.

These vegan success stories show that restaurants shouldn’t be afraid to launch more plant-based options or even remove animal products from the menu entirely. There is a huge audience for more meat-free options, and going the non-traditional route can actually make your business more successful!

Do you love vegan pub grub like the dishes on offer at The Queen Inn?

Take a look at our 5 Classic Vegan Comfort Food Recipes!