The Walking Dead makers refuse to use live tiger on show, and win a PETA award!

Taking a stance against animal exploitation in this film and TV industry, the makers of the hit TV series, The Walking Dead, have opted to use CGI and animatronics instead of a live tiger in the show.

In the upcoming seventh season, a fan-favorite character from the comic books – Shiva the tiger – will be featured, but in an encouraging move that will hopefully inspire others in the industry to follow suite, they have opted not to use a live tiger.

But how is that possible you ask? Series creator Robert Kirkman has confirmed that Shiva will be brought to life via CGI and animatronics, and has noted the decision was made for a variety of reasons – including animal welfare. CinemaBlend quotes Kirkman during a press conference:

“I was asking Scott [Gimple], ‘How are we doing this thing?’ He pointed out that it’s not very humane to have a live tiger on set. And it’s also very dangerous for the actors…So I was like, ‘Great, no real tiger, I can still come to set! That sounds awesome.’ Because I would not have gone to set if there had been a tiger anywhere near the set. So there’s no real tiger involved. It’s all magic.”

The show continues to delight and horrify fans in equal measure with its blistering themes and performances,and refusing to endanger the lives of animals and humans is just further proof of the creative and innovative minds behind the series. The “magic” behind Shiva has been acknowledged by People for the Ethical Treatment of Animals (PETA), who presented the show with an Innovation in Television Award for their use of cutting-edge technology. 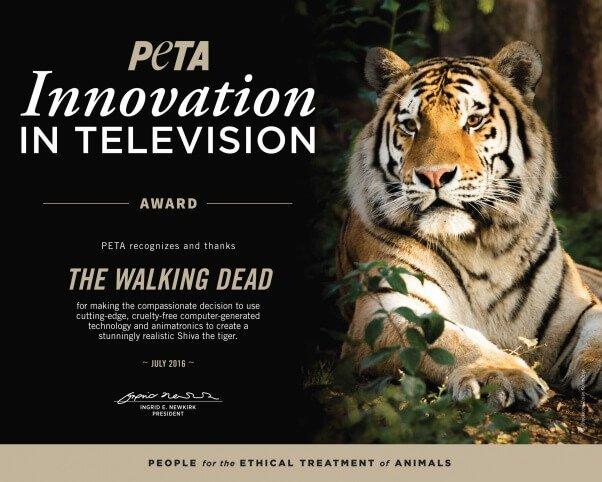 The seventh season of The Walking Dead is set for October 23 at 9pm on AMC, and if you can’t wait until then for your fix, you can view the trailer below, which also includes a glimpse of Shiva: