Waitrose is to stop using disposable coffee cups in a move the supermarket says will save 52 million cups a year. 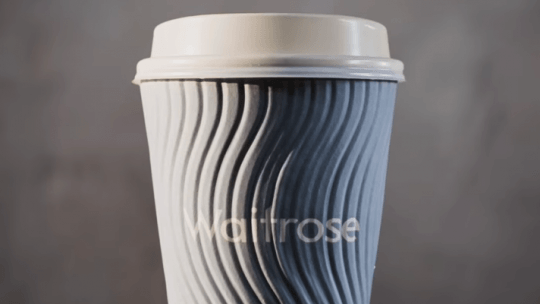 UK supermarket Waitrose has announced plans to remove all disposable coffee cups from its shops by this autumn as part of efforts to reduce plastic and packaging waste and stop millions going into landfill.

An estimated 2.5 billion coffee cups are thrown away annually in the UK, almost none of which are recycled because of their plastic lining, meaning just one in 400 cups is recycled. Waitrose predicts that their ban could save approximately 52 million cups from landfill each year.

Waitrose has stated that the landmark decision has been made as part of the company’s commitment to plastic and packaging reduction.

Tor Harris, head of sustainabilityand responsible sourcing at Waitrose, said: “We realise this is a major change, but we believe removing all takeaway disposable cups is the right thing to do for our business and are confident the majority of customers will support the environmental benefits. It underlines our commitment to plastic and packaging reduction, and our aim is to deliver this as quickly as possible.”

Initially, disposable cups will be removed from nine stores by the end of April: Banbury, Billericay, Ipswich, Newmarket, Norwich, Sudbury, Wymondham, Upminster, east London and Fitzroy Street, Cambridge, and the scheme will then be rolled out to all its stores by the autumn.

Waitrose has announced that members signed up to the myWaitrose scheme will no longer be able to claim a free hot drink across its 180 in-store cafes, instead offering them free food options, which will vary each month, alongside any hot drink they purchase.

Customers who belong to the myWaitrose loyalty scheme will however still be able to get free tea or coffee from the stores’ self-service machines but will be instead be asked to use a refillable cup, the company said.

The Waitrose move comes as the government considers a “latte levy” that would impose a charge on disposable coffee cups after the Commons Environmental Audit Committee called for a 25p tax to improve the UK’s recycling and reprocessing facilities.