Yes, you read that right. Wagamama has created a vegan version of their most popular side dish, Chilli Squid, as part of their Veganuary menu.

The fusion chain is launching perhaps its most ambitious vegan dishes yet for Veganuary 2021, with four new vegan dishes on the menu.

Wagamama’s king oyster mushroom-based Chilli ‘Squid’ will be served with a dipping sauce of chilli and coriander and is sure to be a hit amongst veggies and vegans. Another new vegan side joining the menu is the Vegan Sticky Ribs made from a combination of mushroom and soy protein.

For mains, Wagamama has veganised their second most popular curry, the Firecracker which is now available with tofu. Moreover, those on the hunt for plant-based offerings can now order a vegan No-Duck Donburi, which features shredded seitan and shiitake mushrooms coated in hoisin sauce. 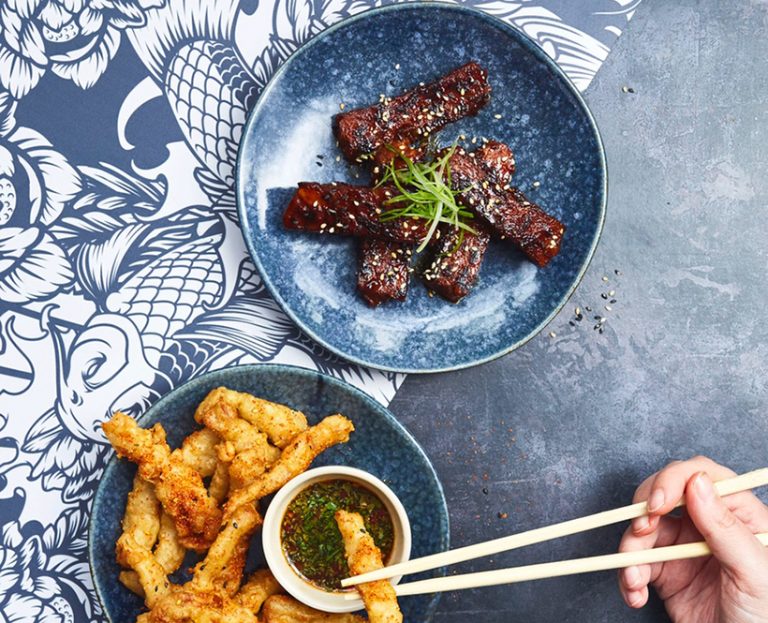 Wagamama has also made the striking commitment to ensuring that 50% of its main menu will be meat-free by the end of 2021.

This is part of their campaign entitled ‘Small Choices, Big Change’ which they launched as a response to growing climate concerns. Choosing a vegan diet is the ‘single biggest thing’ you can do to reduce your impact on the planet, and this is something that Wagamama recognise.

Toni Vernelli, International Head of Communications at Veganuary told Vegan Food and Living: “We’re thrilled to hear the news that Wagamama has made the commitment to halving their meat offering by the end of 2021. It’s a big step as a high street restaurant and shows their dedication to making vegan eating as accessible as possible to the masses.”

The pledge will drive Wagamama through 2021 and beyond, with a meat-free future slowly appearing on the horizon.

In a statement sent to Vegan Food and Living, Wagamama CEO Emma Woods said: “We believe that vegan choices should be so delicious that everyone should want to include in their lives, whether a strict vegan or someone who has never thought of themselves as a vegan before.

“As Covid causes us all to press pause on so many things, let’s make sure we fast forward the small decisions which can better our planet”.

The new Veganuary menu will be launching on January 5th, with the majority of the dishes available for delivery and click + collect.

There’s a good reason why vegans love Wagamama! Check out all the amazing options on the wagamama vegan menu here.