Viva las Vegans: Manchester, Edinburgh and Leicester top list of most vegan-friendly cities in the UK

Holidu, the leading global search engine for holiday lettings, have announced announced the results of its recent research into the most vegan-friendly cities in the UK and Europe as a whole, and the results are as follows… 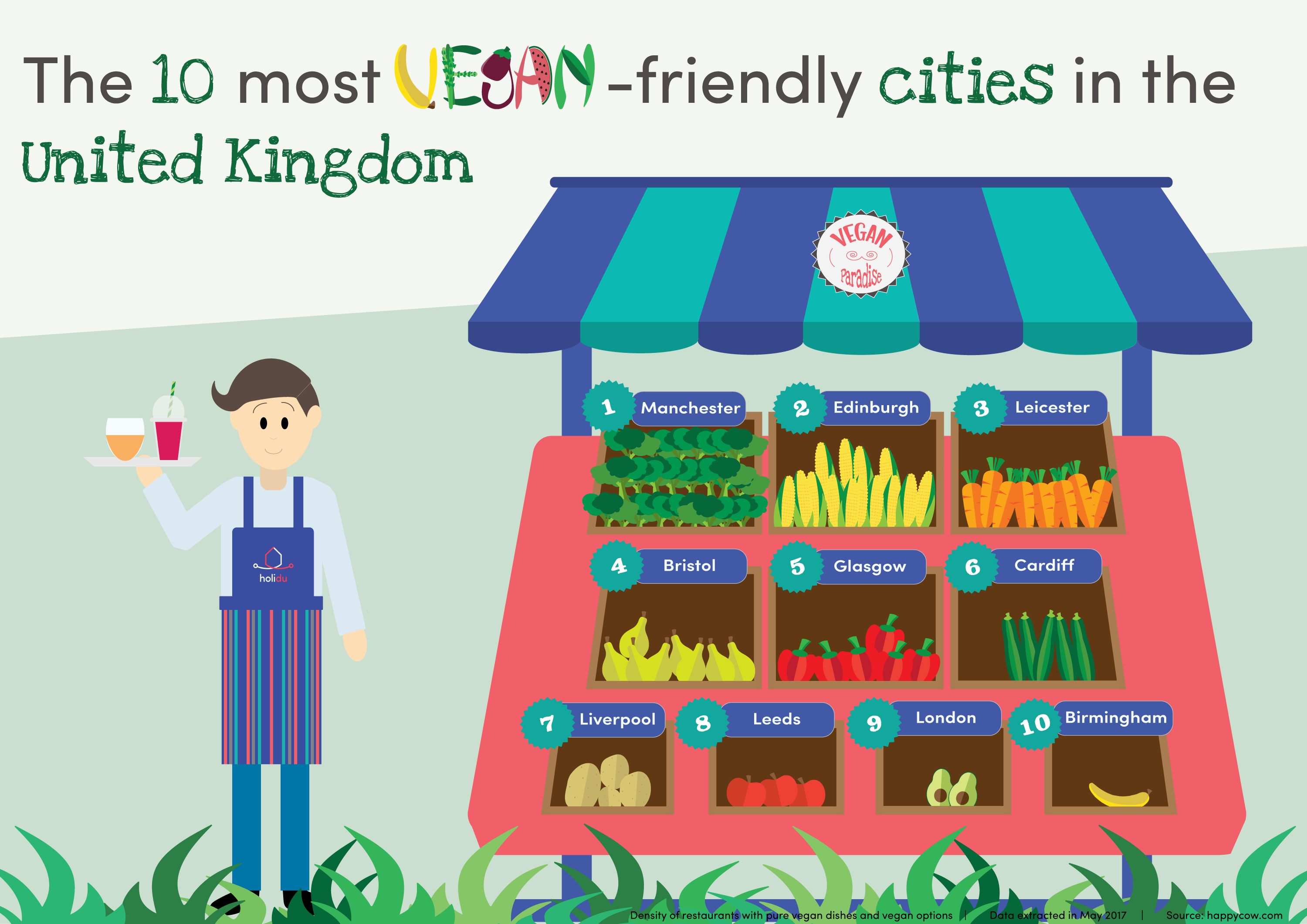 Holidu has announced the results of its recent research into the most vegan-friendly cities in the UK and Europe as a whole, and the results are as follows…

The public perception of vegans has changed significantly over the years and according to an Ipsos MORI poll commissioned by The Vegan Society in 2016, there are currently more than half a million vegans in the United Kingdom, representing an increase of over 350% in ten years.

Nowadays, instead of being limited to a diet of chickpeas and lentils, it is possible to walk into any supermarket and find a wide range of dairy-free products and many more vegan-friendly products. But what about eating out? Holidu, the leading global search engine for holiday lettings, has found out which cities boast the greatest number of vegan-friendly restaurants and cafés in relation to the size of the population.

Manchester is not only home to an enviable music scene and fierce football rivalry, but has also proved to be the most vegan-friendly city in the UK, recently playing host to a number of events such as the Northern Vegan Festival.

Close behind is the Scottish capital city of Edinburgh with its large student population and cosmopolitan flair. Here, vegans and non- vegans alike can choose from intriguing restaurant names such as Holy Cow, Pumpkin Brown and Paradise Palms. And even the traditional “chippies” are getting in on the act by offering vegan options. Don’t miss our pick of the best vegan restaurants Manchester has to offer.

At a glance, the most surprising member of the top three is Leicester which has established itself as a hotbed for vegan delicacies, due in part to the large Hindi, Sikh and Jain populations. However, Leicester actually has deep vegan roots being the hometown of Vegan Society founder Donald Watson.

In fourth place, Bristol boasts a lively vegan social scene with many meet ups and societies. It is also home of the largest so-called “vegan junk food café” Vx with the tagline “a cruelty-free vegan lifestyle doesn’t have to be boring”.

Middle of the road

In the middle of the ranking table are Glasgow, Cardiff and Liverpool, three cities which pride themselves on their tradition and the down-to-earth nature of their populations. But even here, the vegan lifestyle is becoming increasingly popular. The animal rights society Peta actually voted Glasgow the most vegan-friendly city in the UK a few years ago and the café The 13th Note boasts the “best chips in Glasgow”, a bold claim in a city spoilt for choice when it comes to chip suppers.

Wales may be famous for its lamb and cheese, but the Welsh capital of Cardiff is home to a number of vegan festivals such as the Cardiff Viva! Vegan Festival and the Vegan Winter Wonderland Festival.

In 2013, Cardiff was one of only six cities in the UK to be awarded funding towards becoming a sustainable food city. One of Liverpool’s most famous sons is also one of the world’s most prominent vegetarians and animal rights activists: Sir Paul McCartney. The city’s Egg Café leads the way in terms of vegan-friendly restaurants and cafés, doubling up as an art gallery. 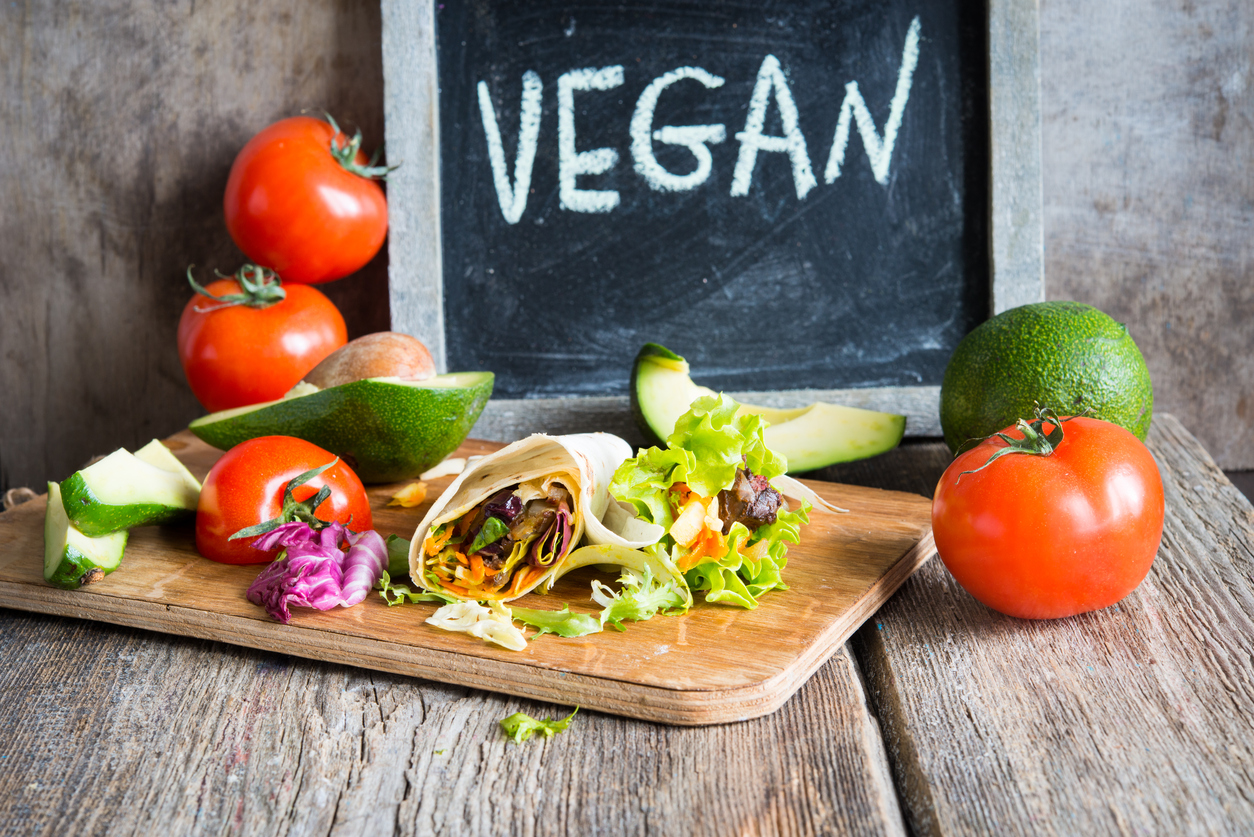 Bottom of the pack

Bringing up the rear were the three cities with the largest populations: Leeds, London and Birmingham. That is not to say that these cities are not vegan-friendly but rather the number of vegan restaurants per inhabitant is lower than in less populated areas.

Similar to Cardiff, Leeds plays host to a special vegan Christmas market and there are now even places serving vegan- friendly roast dinners, complete with the staple Yorkshire pudding.

London caters for all tastes, cultures and diet crazes and vegans and vegetarians are spoilt for choice with over 600 vegan- friendly establishments. Taking the size of the population into account, however, London drops to ninth place in the ranking.

Birmingham is working hard to improve its culinary image. In addition to an increasing number of vegan and vegetarian restaurants and cafés popping up throughout the city, the city is also home to the headquarters of The Vegan Society.

The major cities in Europe generally cater to the needs of the travelling vegan or vegetarian.

Fans of plant-based cuisine can find plenty of supplies in supermarkets or specialist shops in order to conjure up a masterpiece in their holiday home or apartment. Or they can choose from the growing number of vegan options in restaurants and cafés.

This is particularly true in Amsterdam and Paris. In the “Venice of the North”, there are restaurants, cafés and bistros on every street corner offering a wide range of vegan meals. How about vegan pannekoeken for breakfast?

The French cuisine is legendary so it comes as no surprise that Paris is near the top of the vegan rankings with many establishments offering three course vegan menus.

Third placed Lisbon has more to offer than bacalhau and pastéis de nata. It is possible to find a wide range of restaurants offering plant-based options in the Portuguese capital, maybe even a vegan-friendly pastéis?

Scandinavians are always ahead of the latest trends and when it comes to cuisine, they are open to trying the broad range of plant-based delicacies. Thanks to its large vegan offering between the archipelago and the lanes of the old town, Stockholm occupies fourth place in the ranking, with Copenhagen in sixth – despite the fact there are more pigs in Denmark than people. But who is to say that plant-based ingredients can’t be a topping on the traditional smørrebrød.

Berlin is ranked between the two Scandinavian cities in fifth place, underlining the momentum the vegan movement currently has in the German capital.

In Prague, tourism has played a significant role in encouraging restaurants to offer an increasing number of vegan dishes along with the traditional meat and dumplings. 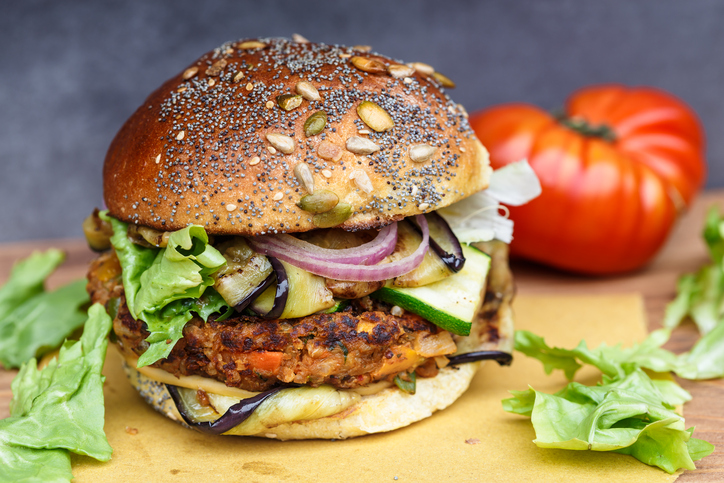 Not always greener on the other side…

There is plenty to excite vegans in Vienna and certainly no lack of restaurant options and vegan supermarkets. The city is renowned for its quality of life and this applies to animals as well as people.

Oslo is not only one of the most environmentally friendly capital cities but the Norwegian capital’s cuisine is also very green and caters well for vegans.

While it may be surprising that London is in last place in the European ranking, this is for a simple reason: due to the sheer vastness of the British capital, it takes slightly longer to come across a vegan restaurant. The London culinary scene is as multicultural as the population. From food markets and festivals, to delis and even coffee shop chains, it is possible to eat a plant-based diet from morning to night, seven days a week.

“Tourists with special diets often decide to rent a holiday home rather than book a hotel as they can prepare their own meals just as they like them, rather than having to check the ingredient list at the hotel buffet”, said Johannes Siebers, CEO of holiday lettings search engine Holidu. Holidu compares millions of holiday rental properties, allowing savings of up to 55% for the same accommodation in the same timeframe.

The data for the report was collected in May 2017 using information from Happy Cow, a website specialising on vegan nutrition. To create the ranking, the number of vegan restaurants and the number of restaurants with vegan options were weighed against the population size in each city.