Vikings: Valhalla star Sam Corlett reveals how he transformed his mind and body with a vegan diet

The star of the hit Netflix show Vikings: Valhalla, Sam Corlett, has revealed how being vegan has impacted his life and how it came to be an important aspect of his life and career.

Being an actor is no small feat; to get into a rigorous routine to stay at your peak health both physically and mentally is challenging for many people.

But Sam Corlett has embraced it fully and has adapted his veganism to get him into the right mindset to achieve his goals.

In a recent interview with GQ, Sam shared details of the daily routine he follows when filming and how eating a plant-based diet has helped him with his overall performance.

The actor starts each day by waking up at 3:30 am followed by meditation, yoga, running and swimming all before heading to the set to spend the day running and swinging prop items. After filming when the makeup is off, he then heads to the gym to lift weights.

Despite the myth that going vegan will mean you loose muscle mass, Corlett said that he “gained a good 10kg” thanks to his diet of “massive stir-fries, made up of sprouts, microgreens, kimchi to get the microbiome going.”

To maintain his physique, the actor said that he starts each day with “a nice clean organic vegan protein, usually with brown rice and peas”.

Sam began to implement a vegan diet in his final year at drama school after experimenting with different foods to find which diet best suited him.

As he goes on to explain, he found that he felt the best on a vegan diet and it was a good physiological match.

His decision to ditch meat and dairy was set in stone one Christmas when he witnessed the amount of meat to be served for the day and opted to make a plant-based stir fry instead.

However, healthy natural eating was already on his radar before making the switch himself as his mother battled cancer three times whilst he was growing up.

In a bid to reduce her symptoms, the family focused on eating organic, natural foods, which began to have an influence on the young star and increased his desire to respect his body and treat it well.

He told GQ: “I try to eat organic wherever possible, my mum’s history influenced that.” 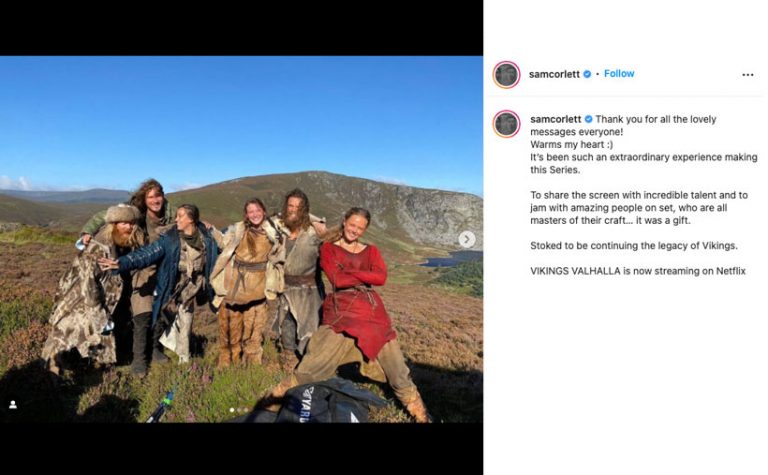 Vegan costumes on the Vikings set

Veganism is more than just what you eat. It encompasses all aspects of life, from what you wear to what you use to clean your living space.

According to tradition, the materials Vikings typically used for their clothing consisted of animal-based sources of leather, wool, and fur.

For Sam, it was important that he didn’t compromise his morals on set, and so he actually swapped his Vikings leather costume for a vegan-friendly one made from cactus leather instead.

In an interview, he commented on what it was like to be a vegan on set: “I hadn’t worn leather in a long time. The costume at the start was all leather, and so that was quite overwhelming.

“Gratefully, Susan O’Connor Cave, our amazing head of costume, she ended up designing a vegan armour for me. So that was really beautiful.”

Sam was enthusiastic about the switch to a cactus-leather costume as he appreciated they retained the authentic look while aligning with his values.

This Netflix star continues to shine and isn’t afraid to share his vegan journey with the world. Hopefully his influence will inspire others to follow a similar path.

Celebrities around the world are choosing to lead a more compassionate lifestyle by going vegan.

Find out why 55 of Hollywood’s biggest stars went vegan in our ultimate guide to vegan celebrities.