With a mission to create a vegan egg alternative that is better for both our bodies and the planet, JUST Egg has been approved by the European Commission and can now look to distribute in Europe.

The key ingredient to the JUST Egg product has just received approval from the European Commission, meaning that there may well be a European launch later this year.

JUST Egg is made from two main ingredients: mung beans and turmeric.

Mung bean protein was initially passed by the European Food Safety Authority in October 2021 and was deemed to be safe under the novel food requirements.

After the product launched in the US, it was a huge hit and exploded in popularity. Since then the company has had its eyes set on global distribution.

CEO Josh Tetrick has previously commented that bringing JUST Egg to Europe would be one of the most important milestones for the company.

He recently told the vegconomist: “Forward-thinking consumers in Europe have been asking for JUST Egg since the day it launched in the U.S. Whether because of climate change, health or a connection to animals, the demand has been significant as has interest from retail and food service partners.

“I’m grateful for the recent approval, which opens the door to begin distribution across Europe before the end of the year.” 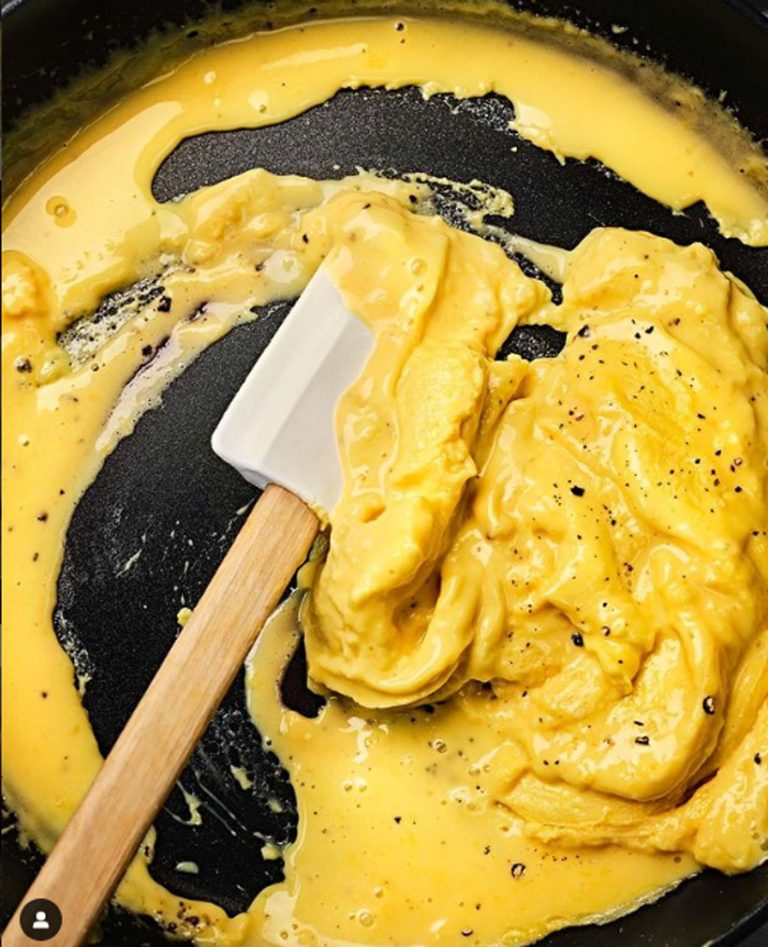 The texture of JUST Egg is very similar to that of chicken-derived eggs. Image via JUST Egg Instagram.

What can you make?

JUST Egg has the potential to create so many classic egg-based dishes such as omelettes, frittatas, harvest bowls, and the classic scramble.

There is even a product version that you can pop in the toaster.

Not only does it have the cooking potential to revive those classics in a vegan version, but it also boasts a lot of healthy benefits.

JUST Egg is non-GMO, has no cholesterol or artificial flavours and holds 5g of protein, making it a much healthier alternative to chicken eggs.

Not to mention, the plant-based alternative will be a much kinder alternative to chicken eggs.

As it states on the JUST Egg website: “We separated the egg from the chicken because the industrialized egg system sucks for the planet, for us and, let’s be honest, it’s not a party for the birds either.”

Will JUST Egg be sold in the UK?

Even though JUST Egg is currently the fastest-growing egg brand in the US, global distribution takes its time.

As it stands JUST Egg can be bought in Canada, Singapore, South Korea, Hong Kong, China, and South Africa.

However, due to the consequences of Brexit, getting to our shores may take a little longer.

JUST Egg can finally enter countries belonging to the European Union and the European Free Trade Association but will have to tackle the UK’s Food Standards Agency to successfully cross the pond.

However, the company is actively engaging with the Agency so the first steps are being made.

We will certainly be keeping a close eye on any updates.

Do you need help with vegan baking? Read our guide to the best vegan egg substitutes!