The UK’s first vegan hog roast is coming to London this Thursday (August 6), proving that the saying “Anything you can make, I can make vegan” really is true!

The brainchild of school friends Matt Mitchell and Ross Mundy, The Hogless Roast has been making a name for itself on the UK street food scene with its innovative take on the hog roast.

The Hogless Roast has managed to capture the tastes and textures of the real thing in its Hogless Roll by taking plant protein and infusing it in their trademark smoky BBQ flavours before slathering it in a sweet and tangy apple sauce, topping it with homemade stuffing and packing it all into a toasted brioche roll.

Of course, no hog roast is complete without crackling, so you’ll even find a 100% plant-based version on offer! 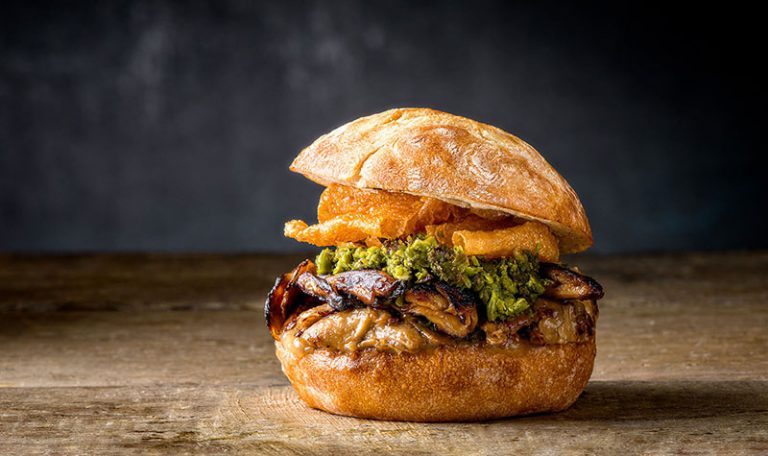 As well as offering their trademark Hogless Roll, the menu boasts a whole host of delicious vegan sides to compliment your meal including mac n cheese, mini hash browns and homemade coleslaw.

Wash down your meal with drinks from Karma Cola Co. and leave room for dessert because they even have a range of Jude’s vegan ice cream on offer.

‘Vegan food can be even better than meat’

The Hogless Roast has proved popular in Mitchell and Mundy’s hometown of Cheltenham, and the team are excited to open their new delivery kitchen in Hackney Wick, East London tomorrow.

In a statement sent to Vegan Food & Living, co-founder Matt Mitchell said: “We’ve been overwhelmed by the amount of people who’ve been ordering our food, week in week out, and we’re hoping this move will give us the opportunity to reach even more, and not just vegans.

“We started the business to show people that vegan food can be even better than meat when it’s done well. We’ve already convinced a few people to move to a plant-based diet and now hopefully we can persuade a few more!”