We may have only just waved goodbye to Christmas, but Cadbury Creme Eggs are already appearing in supermarkets across the country.

This popular chocolate treat is a childhood favourite for many people but vegan alternatives have been difficult and expensive to find for those craving the taste of this nostalgic Easter favourite, until now…

Cult vegan chocolate brand Mummy Meagz has crafted an indulgent vegan chocolate creme egg, dubbed ‘The Chuckie Egg,’ which will launch into Holland & Barrett stores nationwide from Wednesday 22 January, or you can buy it online today.

Giving vegans and non-vegans alike a treat to rival the taste of any dairy-based creme egg, the Chuckie Egg consists of a rich chocolate shell with a sweet creamy inside complete with a gooey ‘yolk.’

The vegan is also free from genetically modified ingredients and palm-oil and will retail at 99p. 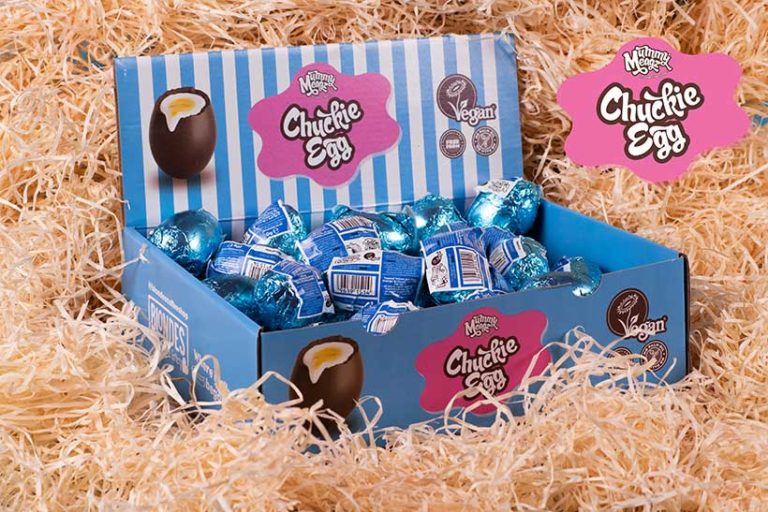 Mummy Meagz founder Meagan Boyle started the company six years ago and was previously making small batches of eggs to sell in her vegan coffee shop in East Yorkshire, but they proved so popular that she soon struggled to keep up with the demand.

Realising she needed to partner with a major retailer to fulfil her mission of making delicious treats that can truly be enjoyed by everyone, Meagan partnered with Holland & Barrett to bring her chocolate treats to the high-street.

In a statement sent to Vegan Food & Living, Meagan said: “In a world full of inequalities, I believe that nobody’s sweet tooth should have to suffer due to dietary and lifestyle choices, or food allergies.

“That’s why I made the Chuckie Egg. Its gooey centre will delight lovers of crème eggs, including those who choose vegan products for the environment and animals, and those who avoid dairy for health. The eggs have grown a huge following simply from being sold in my shop, and I know they’ll become the next big vegan craze for Easter!”