According to the animal protection organisation, its Christmas advert could persuade viewers to ditch their turkey dinners

PETA has created its first Christmas advert, and it’s set to screen in major cinemas across the UK.

The pro-vegan commercial, which is non-graphic, was created in collaboration with creative agency Dream Farm.

It tells the moving story of baby turkey Toby, whose mother orchestrates his escape from an abattoir-bound truck.

The tiny bird is then rescued by a family, and instead of ending up being killed and eaten, he becomes a beloved companion animal.

At the end of the commercial, a simple message flashes up on the screen, saying: “Peace on Earth begins at home. Have a vegan Christmas.”

The advert will screen in cinemas across the UK, including in Vue, Cineworld, and Odeon branches, from November 25 throughout the festive season.

In a statement sent to Vegan Food & Living, PETA Vice President Mimi Bekhechi, said: “Turkeys like Toby are gentle, gracious, and gregarious individuals, and each one has a story that should not end on a fork.

“PETA urges everyone to share comfort and joy this Christmas by enjoying a delicious vegan feast. We stand ready to help with our free vegan starter kit.” 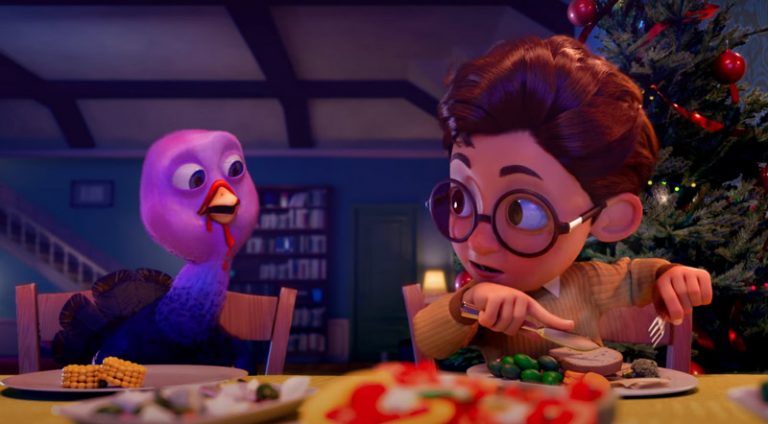 Toby the turkey becomes adopted into a loving family during the advert. Photo © PETA

The plight of turkeys

The organisation added that millions of turkeys are killed for the UK’s Christmas dinners every year.

It said: “In nature, turkeys are protective parents and spirited explorers who can live up to 10 years, but those killed for food are normally slaughtered between 12 and 26 weeks of age.

“The young birds are often hung from metal shackles by their feet and dragged through an electrified bath that can cause full-body tremors.

“Some are still conscious when their throats are slit and as they’re placed into scalding-hot water to remove their feathers.”

Convinced to leave the turkey off your table? Check out these 48 vegan Christmas recipes for a delicious animal-free options