The first Vegan Camp-out was a huge success, but next year organisers plan to go bigger and better to create the UK’s first truly all-vegan, family-friendly outdoor festival. 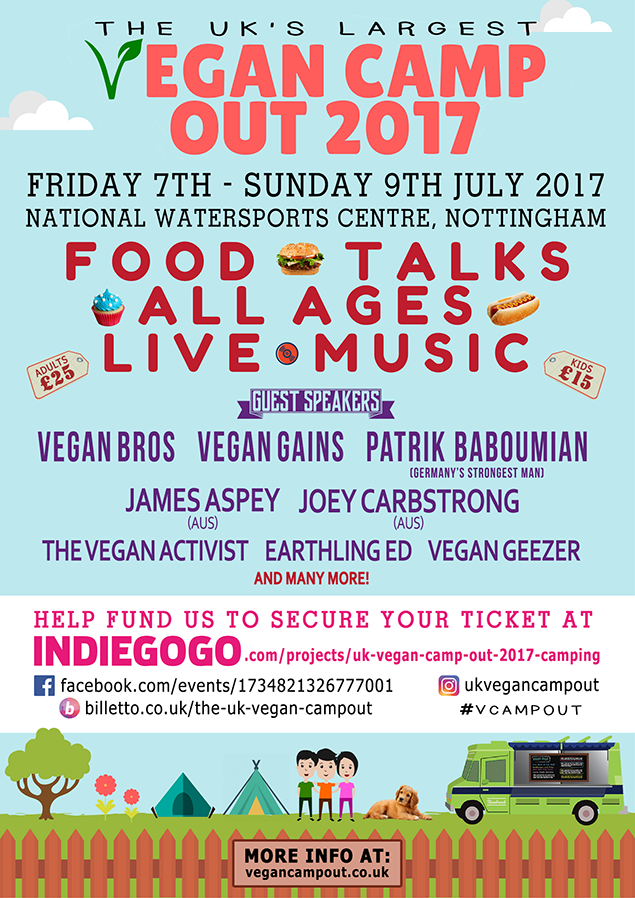 From July 7-9 2017, the National Water Sports Centre in Nottingham will be the venue for two days of international and home-grown speakers, activism workshops, live music, entertainment and delicious vegan food.

The fledgling boutique festival will draw in large numbers thanks to its line-up of confirmed speakers, including online personalities such as Vegan Bros (USA), Vegan Gains (CAN), Patrick Baboumian (GER), James Aspey (AUS) and Joey Carbstrong (AUS). The UK will also be strongly represented, with the Vegan Activist, Vegan Geezer and Earthling Ed all set to give talks and workshops.

Many more respected figures, including the first women speakers to be confirmed, will be unveiled at the next announcement in November. Information about the camp’s musical acts, official food vendors and the activism workshops will also be released to the public.

The Camp-out is moving to its new Nottingham venue to accommodate 2,500 festival goers – around six times more than at this year’s event in Derbyshire. It’s an ambitious project, but one which organisers hope supporters will contribute to through crowd funding.

The camp’s Indiegogo campaign aims to raise £20,000 to cover half of the upfront costs, such as flights and travel expenses for international speakers, venue hire, two marquees, stage equipment, staffing and insurance. In exchange for their support, crowd-funders will receive entrance to the camp, official merchandise and goodie bags.

For more information, please visit www.vegancampout.co.uk. You can also find them on Facebook.